Viscero-Cutaneo-Vascular Reflex and its Clinical Significance

These brief excerpts from the little-known work of Ishikawa shed light on the sub-title of the Segmental Neuropathy text: “The First Evidence of Developing Pathology.”

Department of Pathology, School of Medicine

Reprinted from annual report of The Research Institute of Tuberculosis

These reflex responses are perplexing and complicated, but have been studied in detail as a referred reflex.

In addition, we would like to add to this category the newly discovered cutaneous vasomotor reflex (cutaneovascular reflex). When a visceral stimulus is projected to the subcutaneous arteriole in the corresponding dermatome, some neural vasomotor disturbances are to be resulted. As the subcutaneous arteriole represents the typical end-artery, the insufficient circulation of the blood causes the exudative changes due to the impaired permeability of the capillaries and the bionecrotic changes due to the defective nutrition in the delta-form area nourished by the involved artery.

…As already described, the cutaneous reflex points are due to the neural disturbance of the blood circulation in the subcutaneous arterioles, some of which are visible papules, but most of which are only microscopically recognizable exudative changes. It is proved by the microscopic examination of the reflex points in the excised skin. It is traced as one of the exudative processes by summarizing the findings of the cutaneous reflex points. This figure (Fig. 21) presents the variations. 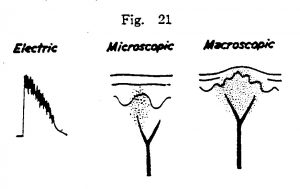 …The correlation between the sympathetic sensation and the corresponding dermatomes will be described in the liver and heart.

Correlation Between Sympathetic and Corresponding Dermatomes 25-26

First, the hepato-parietal reflex will be depicted. As the so-called sympathetic sensation of the liver belongs to Th 3-10 (esp. Th. 6-8), the reflex is to be projected to the paries corresponding to the same. (Fig. 25) The determination of the dermatomes in the cutaneovascular reflex resulted in Fig. 26, summarizing the distribution of the frequencies. This figure is identical with the Head’s hyperalgesic zones in the liver diseases (including the billiary duct) in Fig. 27; While the Head’s zone represents a belt-like area, our reflex takes a form of point. The reflex points are anatomically concentrated in a certain area even within a dermatome.

Correlation Between Sympathetic and Corresponding Dermatome 27-28

…The cardio-parietal reflex will be explained in brief here. As the so-called sympathetic sensation of the heart belongs to C 7 to Th 7 (esp. Th 1-5) (Fig. 39), the reflex points are established in these respective dermatomes. 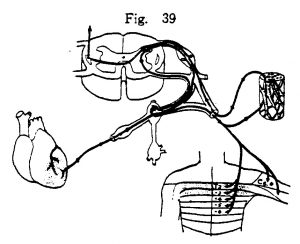 Sympathetic Sensation of the Heart

…While the visceral disease is projected to the skin as a viscero-cutaneous reflex, the stimulus on the skin is projected into the organ as a cutaneo-visceral reflex. The former gives a base for the diagnosis, and the latter for the therapy. In relationship of the reflexes between the organ and the skin, our cutaneous reflex points are diagnostic and at the same time therapeutic.