Cohnheim in 1887,1 and Metchinikoff in 1892, 2 described the “Vascular Phenomena” after observing the very thin membrane of a frog mesentery under a microscope. Lightly heating the tissue with a hot light beam induced a vasoconstriction for a moment, then vasodilation (Fig. A-a), then peripheral drift of leukocytes (b) and diapedesis (c) with the white cells slipping out of the vessels by putting a “foot” through the “crack” and then crawling through that foot These phagocytes then cleaned up the debris. It was thought for years that there was a direct chemical stimulus to the wall of vessels by the histamine to cause the vasodilation. The “trail” of the histamine was thought to be the basis of “chemotaxis” with the phagocytes going directly to the “bait” put out by the injured cells (d). This has been repeated many times, but one factor was overlooked. The same experiment can be done with all the nerve supply previously cut. In this case with the same tissue heating and the same histamine release by injured cells there is NO inflammatory response. There is no dilation, no diapedesis and no phagocytosis. The tissue just rots away and then is sloughed and cleaned out by the adjacent peripheral tissue which still has intact nerves. This would indicate that there is a neurological link not previously described. Hence, we should investigate the nerve link in the histamine reaction. Speransky cited numerous experiments to demonstrate that even coal tar irritation, which commonly caused cancer, had a similar “no-effect” when the nerve was cut to the irritated tissue. 4 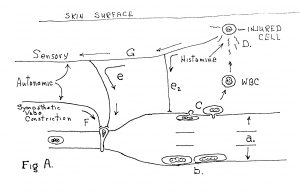 Neural Control of Vasoconstriction and then Vasodilation

In 1876, Strieker noted that stimulation of a sectioned posterior root (k) induced peripheral vasodilation.5 Since it was considered that the neuron can propagate an impulse in only one direction (g) (Bell-Magendie Law), it was thought that there were vasodilator cells in the lateral horns (1) with their axons making exit through the posterior horn instead of the usual anterior horn. They were thus called antidromic neurons. However, after adequate time for degeneration of the axons after sectioning, the same peripheral vasodilation occurred. That would indicate that there might be a few cell bodies in the dorsal root ganglion with an antidromic vasodilation function. Verner had illustrations of these concepts in Science and Logic of Chiropractic 6. After nicotine was injected into the dorsal root ganglion to totally block any synapses, the stimulation of the sectioned posterior root still caused the local vasodilation as did peripheral stimulation of these dorsal nerve root ganglion cells.7 (m)

With that background reference material it is now possible to understand more of a common phenomenon. Lightly press or ‘scratch” a thin line across the palm with a fingernail. Within one second, the line becomes pale with a momentary vasoconstriction. This is a local defense mechanism to isolate that injured area and stop further injury spread. In about five seconds the line becomes red instead of white. Here is the extremely localized vasodilation which was for years attributed solely to histamine release, direct chemical block of the sympathetic vasoconstriction and the consequent vasodilation. Remember that with the nerve cut the inflammatory reaction does not occur, so there is a nerve reflex involved. Notice the logic involved next in this story. Stimulation of a sympathetic ganglion causes peripheral somatic vasoconstriction. (I)

Blocking one ganglion had little effect because the vasoconstrictor function is overlapped on 4 or 5 segments. Cutting away several adjacent sympathetic ganglia induces an immediate vasodilation. This is passive vasodilation. The extremely localized red line related to the scratch on the skin is NOT passive nor does it cover several vertebral segment distribution areas. Hence, this red line has been called a LOCAL ACTIVE VASODILATION. 9 As far back as 1901 Bayliss had used the term antidromic dilation (h) for the peripheral vasodilation induced by posterior root stimulus.10 Now we can consider Dale’s Law:

“If a neuron releases a given substance at one branch of its axon which has a function as a synaptic transmitter, then the same substance will be released at the synapse formed by all other branches of the axon.” 11

Dale’s hypothesis assumes a special significance in the case of the primary sensory neurons which are bipolar (embryologically) in nature with one branch peripherally directed and the other forming central connections in the cord and medulla. In adults these DNRG cells appear to be unipolar with the efferent and afferent processes adjoining like a “mixed” trunk. These dorsal root ganglion cells often have many collateral branches. In light of the preceding material it becomes more apparent why Fig. A can be very accurate in the typical histamine response to heat injury. Barron and Matthews report that “Some 40% of the posterior nerve root fibers can carry centrifugal impulses.” 12 This would indicate a very broad coverage by local active vasodilation. The damage illustrated in Fig. A causes a classic inflammatory reaction and repair when the autonomic nerve is intact. When the nerve is cut there is no vasodilation and repair but only death of that tissue. Hence, it becomes more apparent why and how some wounds have been slow to heal but have made dramatic recovery following spinal adjustments. Instead of cut nerves we have impaired nerve function at the subluxation level. This helps to explain why even dental surgery and abdominal surgery will heal so much more quickly if adjustments are made right after the surgery (which often induces reflex subluxations and aggravates existing ones.)

Someone will likely ask what an adjustment has to do with this perverted physiology. How can a subluxation delay the healing as is often demonstrated by clinical results? Some of the results from 5 minute thumb pressure on an Atlas transverse process reported by Bums in 1910, included visible vasodilation of the conjunctive tissue as well as delayed reaction time.13 More recent experiments with electromyography reveal altered chronaxia and slower reflex time where a subluxation is present. Petersen reported using a thermister balometer (a radiometer) and checked skin temperature over a nerve pathway peripheral to a subluxation.14 With postural reflexes and no physical contact on the body within several inches of the subluxation, there were very visible metered thermal changes as the subluxation changed. As the subluxation was improved the segment warmed. When the subluxation was reflexly aggravated the segment cooled and was again warmed within seconds as the subluxation was again improved. Many of the students using the palm of the hand as a radiometer, have been able to detect warming of cool spots in less than one second after moving the vertebral joint, reducing the subluxation with distant postural reflex pressure, and using no direct contact on the body within many inches of the subluxation.15 These thermal changes plus the intrinsic muscle balance of rotators, intertransversari, etc. plus tender “trigger points” and leg checks all improve or become worse immediately and concurrently as the subluxation is improved or aggravated.

Fig. B will illustrate the collateral branches (e) of the cutaneous sensory neurons and their organic, anatomical bases for the phenomena, whereby many chiropractors use skin temperature devices to evaluate subluxation pathogenicity and response to adjustments. The same nerve pathways are utilized in another vasomotor response technique where two strokes are made parallel to the spinous processes about two inches lateral of the midline. Normally, this will be pale for a couple seconds and then becomes evenly red. The levels with delayed reddening are likely areas of subluxations. The response normalizes quickly with an adequate adjustment. The contact and thrust may be at this “indicator” subluxation, or at a distant but related subluxation. 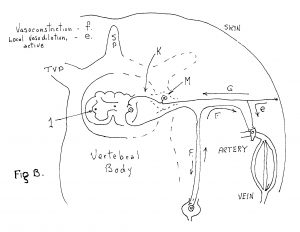 Notice how the collateral axons to the arterioles are the pathway for local active vasodilation, when this antidromic reflex spreads from thermal receptors in one case, from pain receptors in another and from histamine stimulus in yet another (e). As this neurophysiology is appreciated it becomes increasingly apparent that the trophic antidromic function explains not only many of the delayed healing responses which are normalized when the subluxations are corrected, but also explains the various instrumentation procedures used over the years. Another paper on skin temperature considers more detail on these procedures and interpretations.16

Simultaneously, with somatic vasomotor changes are similar visceral changes of vasodilation and vasoconstriction. Due to “two-way shunts” of small collaterals and intemuncial crossovers, like access ramps on crossing freeways, there is a constant viscerosomatic intercommunication of both normal and abnormal states.

Antidromic vasodilation had been known since 1897.

This local active vasodilation is not a block of vasoconstriction only.

The pathway used is a collateral branch of a DNRG sensory neuron.

One such single isolated pathway can be a very minute, almost microscopic area(e).

Many such DNRG cell collateral branches will be included in part of a vertemere.

This can explain the extremely segmentalized cool strips at a subluxation and why there are two or three such strips within one subluxated vertemere.

It also explains the localized delayed healing of wounds and fractures. This resting vasodilation is a continual function superimposed upon the recurrent active sympathetic somatic vasoconstriction (and/or vasodilation). An early effect of a subluxation is damage to and loss of this normal physiology of local active vasodilation which explains much instrumentation use. Even though this mechanism has been well investigated it is usually overlooked by neurophysiologists, because it has such a small effect on total body temperature. Since it is such a vital link in many commonly observed clinical responses, it is very helpful for chiropractors to understand this mechanism. What easier way to understand and to explain to a scientist the basis of chiropractic success with delayed healing, with cold strips, with immunity and with the validity of skin temperature evaluation. This vasodilation neurology represents a valid scientific foundation underlying the explanation for much of the chiropractic success with many clinical problems.