The sensory fibres, through which the antidromic impulses of vascular dilatation are conveyed, are distributed anatomically on a segmental level throughout the length of the spinal cord through each posterior division of each spinal nerve.

It becomes evident that segmental skin temperature differentials represent zones in which, because of reduced dilating tone, the vasoconstriction of the blood vessels of the skin is seen to dominate in the affected area. 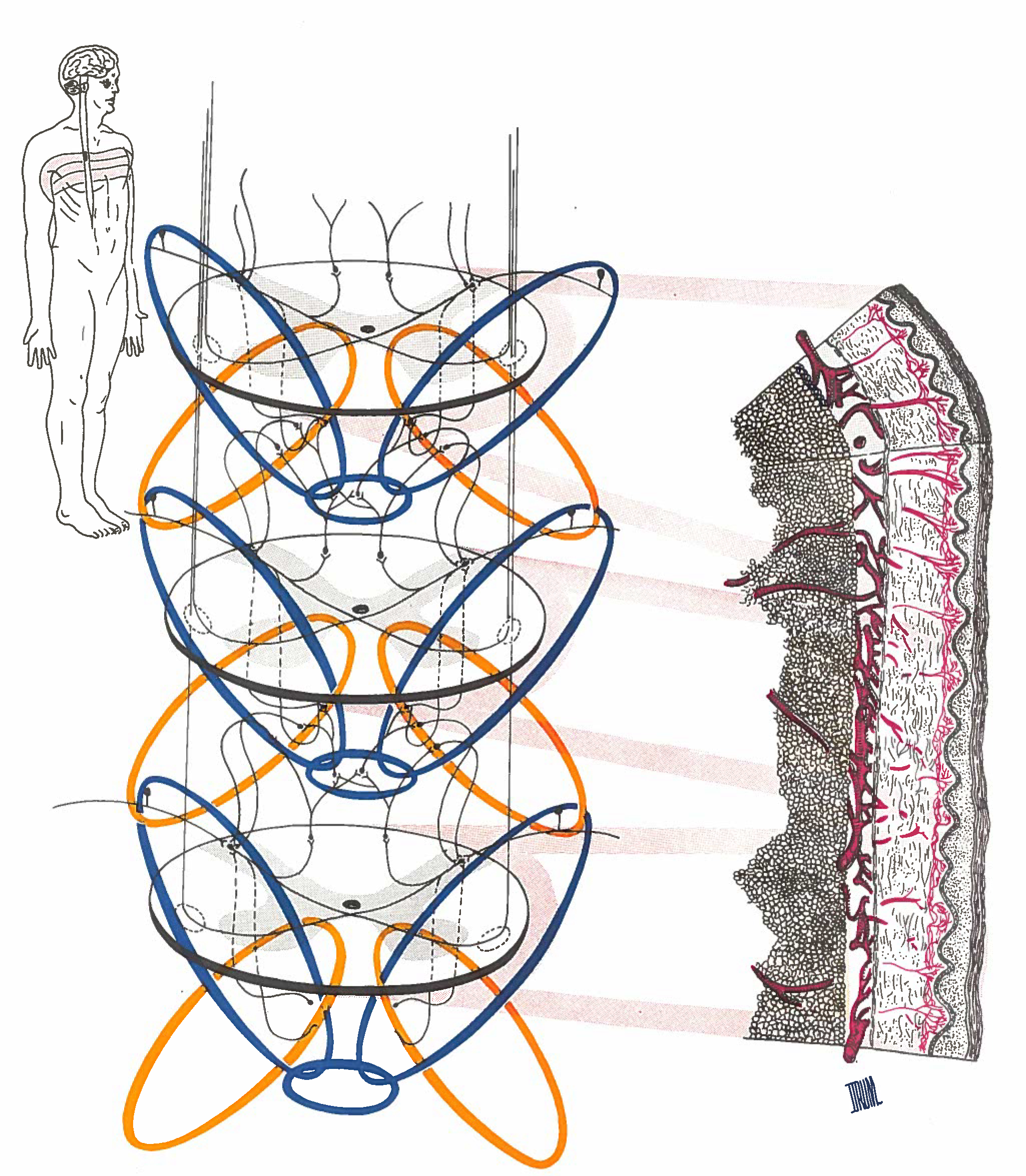 This cannot be explained satisfactorily, either in terms of a simple block to the transmission of the impulse, or, of a simple stimulation through abnormal irritation. If this were so, one would expect to note gross sensory disturbances accompanying the segmental skin temperature reduction. No such loss of sensation or abnormal sensation is normally observed. Further, it can be demonstrated that the neurological reflex responsible for producing the “red-flare” reaction normally elicited by various forms of mechanical trauma can be evoked within the area where the functional integrity of dilating control has been lost. Such evidence would indicate that the affected neurone is basically physiologically intact … that only the spectrum of its normal range of response to fine increments of functional adaptation is reduced leaving the mechanism responsive only to a more gross range of activity.

A detailed analysis of the neurological architecture of the probable inter-spinal connections of nerve fibres associated in the control of appropriate dilating response to temperature changes of the body will illustrate the basic elements which must be involved if this type of phenomenon is to be explained.

It has been estimated that approximately 40% of all fibres travelling in the posterior root of each spinal nerve are capable of transmitting efferent impulses backwards to the periphery from the spinal root ganglion. Although it is presently not known whether the antidromic impulse is conducted over fibres subserving some other function, our clinical observations would seem to indicate that this is so.

It is apparent that the fibres mediating pain impulses, because of their relatively high stimulus threshold, and the more direct course they take, with few internuncial connections, upward to higher brain centres are not involved with the transmission of the dilating impulse. More likely, only the smaller type nerve fibres which have lower threshold of response to stimuli, mediating such sensations as touch and temperature, are involved in antidromic transmission. These fibres upon entering the spinal cord from the lateral division of the posterior root, divide into an ascending and descending branch which pass to levels immediately adjacent where they make connection with internuncial neurons forming intricate and oftentimes indistinct interconnection with unilateral and bi-lateral divisions of the reflex mechanism. Together with these fibres there are neurons which pass more directly to the opposite side of same segmental level of which they enter the cord. This design of neuron distribution has been identified through surgical experimentation as the best approximation of the known inter-segmental pathway serving the functions of various modes of sensation which show a high degree of peripheral localization. Incidentally, such localization is identical to the same distinct localization of dilating tone. Until the neurological pathways of vasodilatation are isolated, if it is possible such a feat can ever be accomplished, this design will adequately explain the neural mechanism of vasomotor control of dilatation.

The most distinct feature of vasodilatation is the functional evidence that any one spinal level is not capable of itself to elicit an antidromic response capable of dilating the blood vessels of the skin supplied by that segment. It is necessary for each spinal level to so integrate its incoming sensory data with similar elements of associated neural mechanisms above and below itself as well as with the opposite side of the body on its own level before the antidromic reaction can be produced. Neural control mechanisms of this type indicate a high order of temporal summation of incoming impulses with each link of the intersegmental control in order to bring about the highest order of appropriate local control or sensory awareness. It is evident that any deviation in the accurate timing, or distortion of the “memory” of impulse firing pattern for a given stimuli configuration will change the central confluence of incoming impulses, in such a way that the affected elements of the “neural linkage” shall fail to function. Analyzing the probable neural mechanism in this way it could be predicted that any malfunction of even the smallest “link” in the chain of neural events associated in control of vasodilation would send out evidence of its existence by its failure to dilate the vessels of the skin directly under its control. The affected area of skin could lose its dilating tone in a sharply segmentalized manner if this is an accurate description of the mechanism of the antidromic impulse and vasodilatation.