Heat flows from the interior regions of the body outward to the cooler exterior environment.

To conceive of the intricate interplay existing between purely physical modes of heat transfer and its physiological regulation, one may view the process by analogy. 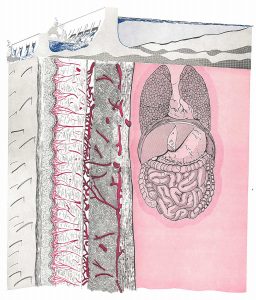 The internal regions of the body may be visualized as an area which exhibits a high degree of uniformity and constancy of temperature maintained within an extremely narrow range of deviation from a normal of 98.6° Farenheit. This area, appropriately identified as the “thermal core” of the body, may expand in size to include the tissues just beneath the surface of the skin if the environment is warm. Conversely, the thermal core may be reduced in size wherein its outer limits reach only to the deeper portions of the musculature of the body if the environment is extremely cold. Between the thermal core of the body and the external environment there are two distinct anatomical barriers, the skin and the subcutaneous fat, which act as purely physical insulators or dams against the equally purely physical transport of heat moving from the thermal core via conduction through the tissues to the periphery. The rate at which heat flows by the process of conduction is greatly dependent upon the resistance offered by these tissues. But heat flow is not solely dependent upon this resistance, or conductivity, of the tissues. By analogy, just as water will run downhill, always flowing to the lowest possible level, so heat, if left to itself flows down the temperature hill, always warming the cold objects at the expense of the warmer ones. The rate at which heat flows therefore, depends on the steepness of the temperature hill as well as on the properties of the material through which it has to flow. The difference of the temperature per unit distance is called the temperature gradient; in analogy to the idea of steepness of grade, which determines the rate of flow of water. It is evident that the body cannot depend on the external environment to be always at a temperature which would establish the appropriate steepness of this thermal gradient to accurately accommodate the changing quantities of internal heat production. The need to adapt to rapid changes in the relationship between internal and external temperature produces a physiological response in the redistribution of the water content of the tissues by circulation of blood.

Blood vessels, arising primarily from the muscles of the body, send perforating branches through the subcutaneous fat layer to the capillary bed which lies just beneath the surface of the skin. These arterioles are analogous to the sluice gates which can be opened or closed to regulate the flow of water through a dam. The rate and volume of blood permitted to flow through the subcutaneous fat is regulated by simple vasoconstriction and vasodilation of the vascular network of the skin. The opening or closing of these blood vessels mechanically regulates, via the functional process of forced convection of the blood stream, the volume of heat capable of passing into this area and hence, to the environment.

The significance of the “sluice gates” of vasomotor control of thermoregulation, to the chiropractor, is that their “settings” are controlled by the nervous system. To measure skin temperature, the thermal gradient and the physical as well as the physiological reasons for its existence enables one to judge the efficiency of the vasomotor control system. To be able to judge whether this system is functioning normally or abnormally in various areas of the body enables the chiropractor to evaluate the segmental integrity of the nervous system in action.