Conscious awareness of environmental temperature is interpreted in the brain from a pattern of impulses generated in extremely sensitive nerve endings situated just beneath the surface of the skin. This nervous mechanism does not identify external temperature in actual degrees, but rather is designed to monitor the rate at which internal heat is being lost to the environment. 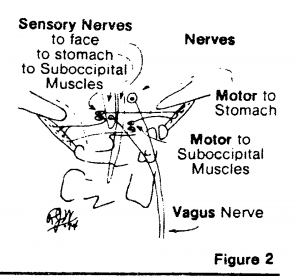 Because the body has a certain weight and size it is subject to the same laws of heat transfer as apply to inanimate objects. It is imperative that the quantity of heat generated within the body as a product of cellular activity be held within a very limited range of temperature at all times regardless of the large variance in internal heat production which results from physical activity or an increase in environmental temperatures. Thus, this conscientious recognition of environmental temperature alerts the mind to the intricate interplay proceeding to seek thermal equilibrium between the purely physical processes of heat dissipation and internal heat production. Should heat loss proceed too slowly, due to increased physical activity, or an extremely warm environment, the need is felt to rest from such activities or seek a cooler environment. At the opposite end of this thermal spectrum where heat is lost to a cold environment in greater quantities than it is being produced within the body the desire is felt to reduce the rapid loss by seeking a warmer environment or increasing physical activity, thereby, elevating internal heat production. When physical activity is reduced to a minimum in a relatively cool environment it is interesting to note the physiological adjustments in the rate of blood flow between different parts of the body which are necessary to compensate properly for the different rates of heat loss due to the difference in the effective radiating surface area in relation to internal mass.

In an environmental temperature of 64° Fahrenheit, the unclothed body, at a resting metabolic rate, will exhibit both extremes in the adjustment of blood flow. Because heat is lost more rapidly from the limbs of the body than the trunk, blood flow is reduced to a minimum quantity through constriction of the blood vessels just beneath the skin surface of these parts. In contrast, the trunk of the body, because of its larger mass, loses heat more slowly, therefore the blood vessels of the skin will be found to be in a state of maximum dilation. As either the environmental temperature increases, or some physical exertion is made, it is observed that the involuntary physiological response is a gradual release of the constriction of the blood vessels of the limbs. The fingers and toes, being the most efficient radiators of heat because of their relatively larger surface area to internal mass are utilized to accommodate approximately 60% of the total physiological adjustment to any particular thermodynamic relationship which may be encountered between internal heat production and heat transfer to the environment. This reciprocal action of shifting blood volume between the areas near the surface of the body and the internal organs requires an intricate network of control over the expansion and contraction of the vascular beds in the respective areas.

As we now view the nature of any derangement of neural activity as being an abnormal perversion of appropriate neural response to normal stimuli we see the ramifications which are possible through the expansion of even a single element of control which might be so affected in the vast communication and control network of the single function of maintaining an internal constant temperature.

The course of progress of a localized neuropathy on a spinal level in the vasomotor control system theoretically can proceed along direct pathways to its highest order of abnormal sophistication which is its ultimate debilitation of the highest order of neural integration found at the level of human consciousness in the cerebral cortex.

Such a phenomenon is observed clinically in certain types of psychotic behaviour, where the interpretive centre is depressed in association with other facets of mental derangement. That the neuropathic process takes this particular course of development is of course entirely dependent, as it is in any disease process, on the particular configuration of neural elements which are, by chance or probability, drawn into the orbit of influence of the original process. The phenomenon of reduced sensitivity to temperature is not limited to psychotic degeneration but appears clinically in all diseases to a greater or lesser extent, being delimited to the section of skin enervated by the affected neuromere exhibiting neuropathic behaviour of vasomotor control. Such evidence would tend to validate the hypothesis that the nerve pathways of temperature sense and those which control the rate and volume of blood flow through the skin are synergistic. It is possible that one sensory pathway serves both functions as hypothesized in the following section.