In our study and use of skin temperature as an analytical indicator of abnormal nerve function we qualify any interpretation of our findings with a full appreciation of the complexity of the interactions of the physical, chemical, and neural mechanisms involved with heat transfer.

Considerable research data has been compiled on the subject of skin temperature and its rate of change under various physical and physiological conditions. It is not the purpose of this paper to give the reader a detailed resume of all experiments performed in this field, but rather to list, as simply as possible, certain well substantiated facts which bear directly on our system of analysis. 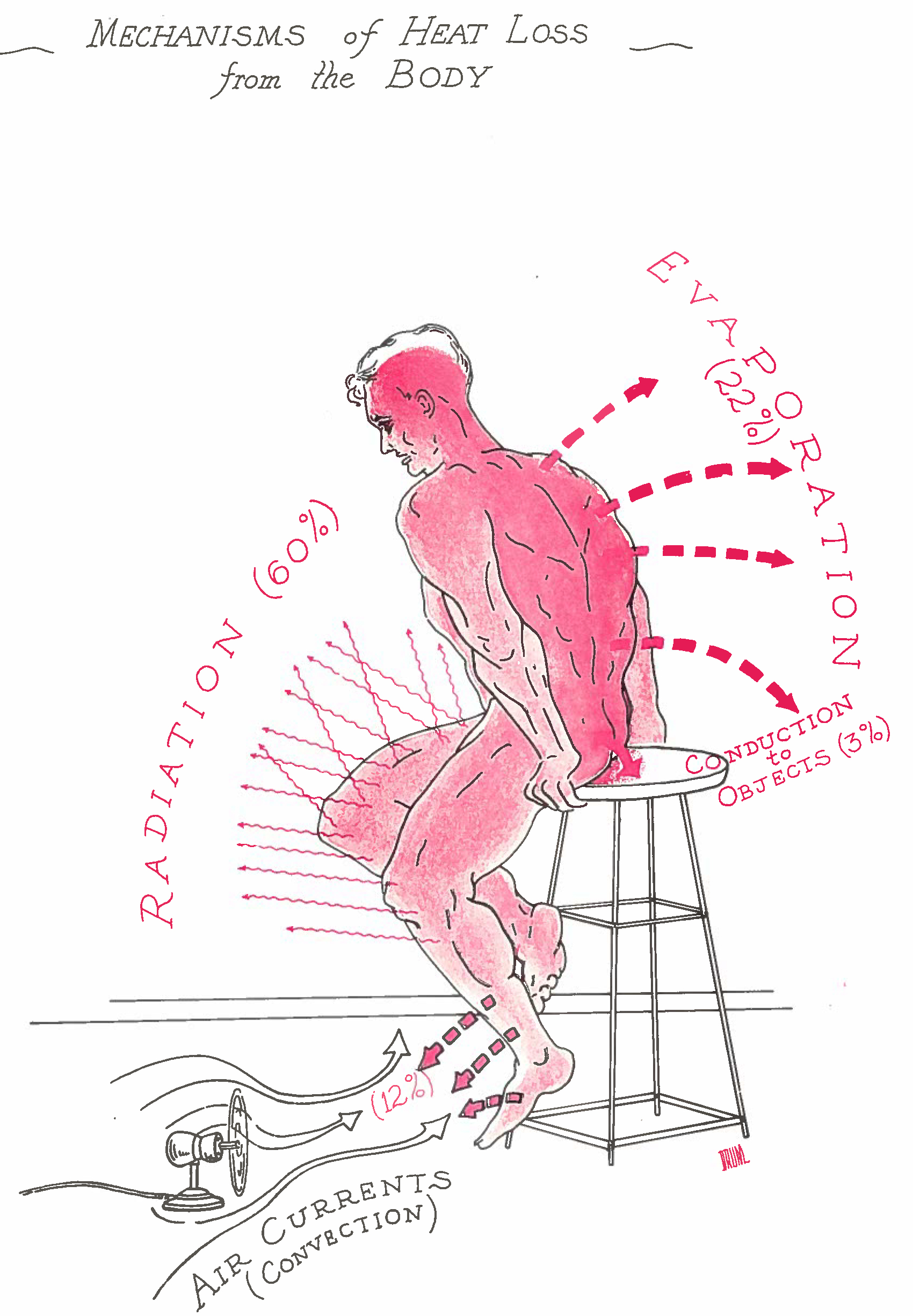 In the study of skin temperature it is understood that definite physiological and natural laws are involved which impose certain limitations to the practical use of this type of analysis. Because of this, it is well at the beginning of this study to realize the fundamental factors
involved in the thermal exchanges existing between Man and his environment. These may be listed in the following main categories:

1. HEAT PRODUCTION – Tissue metabolism; the source of all heat production.

For our purpose it is convenient to define metabolism as the process of energy transformation within the body, whose chief product is heat. Factors such as the simple ingestion of food, muscular activity, emotion, and certain dis-ease conditions will influence the metabolic rate and thereby change important relationships which exist between heat production and heat loss. It is understood that the internal body temperature must at all times represent the balance struck between the heat produced by metabolism and the heat lost to the environment.

Before attempting to explain the avenues through which heat is lost or dissipated to the environment and the factors which will influence this loss, it is desirable to include at this point a basic explanation of HEAT.

Sensory organs of the skin provide man with a rough subjective measure of temperature, but for scientific purposes a more exact temperature scale is required. Measurements of temperature are based on the observation of changes in physical quantities, e.g. the length of a column of mercury in a thermometer, which, because of thermal expansion, increases with temperature. Observation of the pressure in a fixed volume of gas also gives us a temperature scale, and illustrates an important principle of thermodynamics – Heat is a form of energy. As we put heat into the gas its molecules move more rapidly, i.e. their energy increases, and their greater force of impact on the walls of the container produces an increase in pressure.

A simple definition of temperature is obtained by saying that heat flows from places of higher temperature to places of lower temperature. We must now look at the various ways in which such a transfer can occur. Imagine a cold box with a very hot object pended inside it by means of a metallic wire. Suppose we have a vacuum inside the box. The object loses heat by radiation, i.e. heat flows to the walls in the form of electromagnetic waves. Radiation is the process by which heat reaches the earth from the sun. The object also loses heat by conduction, since the ends of the metallic suspending wire are at different temperatures, and heat flows along the wire from the higher to the lower temperature. An important difference between the two processes is that conduction only takes place through matter, whereas radiation can travel through a vacuum. Let us introduce gas into the box. The gas near the object is heated by contact with it, and rises, thus carrying heat away from the object. This process is called convection, and the so-called radiators used for indoor heating use this process.

When we have gas in the box, the three modes of heat loss are all present together. An important experimental result is Newton’s law of cooling, which stales that the rate of loss of heat of an object is direct proportional to the temperature difference between the object and its surroundings.

The human body uses the above three ways of heat transfer, and also the process of evaporation (in sweating). The process is illustrated by putting ether on the skin. A cooling is felt, since the rapidly evaporating ether carries away heat with it. The relative contribution of the various processes to the cooling of the human body depends on the environment.

A given material may be characterized, as far as heat flow properties are concerned, by giving its specific heat and thermal conductivity. If we heat one gram of substance through one degree Centigrade, the amount of heat we put into the gram is defined to be the specific heat of the substance, and the unit of heat employed is the calorie, which is the amount of a heat involved if we use water as the substance. Thus specific heat is given in terms of calories per gram.

When conduction occurs it is found that the amount of heat flow per unit area through a substance is proportional to the temperature gradient, i.e. the rate of decrease of temperature with distance, and to a quantity called the thermal conductivity of the substance.

Suppose we have a wall of material with the same temperature on both sides, and we suddenly increase the temperature on one side. Heat begins to flow through the walls, at a rate proportional to the thermal conductivity of the wall material. As heat reaches the interior regions of the wall, they begin to heat up, at a rate which depends on the specific heat of the wall material. Finally, a state of thermal equilibrium is reached, in which the temperature does not vary in time but varies smoothly through the wall, while heat passes through the wall at a fixed rate, which is proportional to the temperature difference across the wall and the thermal conductivity, and inversely proportional to the wall thickness. The final rate of heat flow depends on the thermal conductivity, but the time taken to reach equilibrium will increase with the specific heat, since the heat flow can slowly heat up the wall if the specific heat is high.