Viscero-somatic and somatic-visceral reflexes have been recognized for years and investigated in great detail by eminent physiologists. It has been demonstrated repeatedly and vividly that the constellation of symptoms and pathological changes is almost entirely neurogenic and extremely diffuse, often far from the initial site of injury to the nervous system. It has been shown that the severe shocks to the nervous system as done in a nerve section, novocaine blockade and even by much of the drug therapy is frequently sufficiently drastic to scatter the constellation of symptoms and induce a subsequent pathology which is at times much worse than the original problem. The potency of a light stimulus properly applied is illustrated by the classic example where 10 of 11 cases with quinine resistant malaria responded completely by the disappearance of symptoms and the disappearance of the microorganisms following the very gentle stimulation of the nervous system by withdrawing and re-injecting the cerebrospinal fluid. Hence we find that re-examination of the chiropractic approach to health and disease is quite logical. 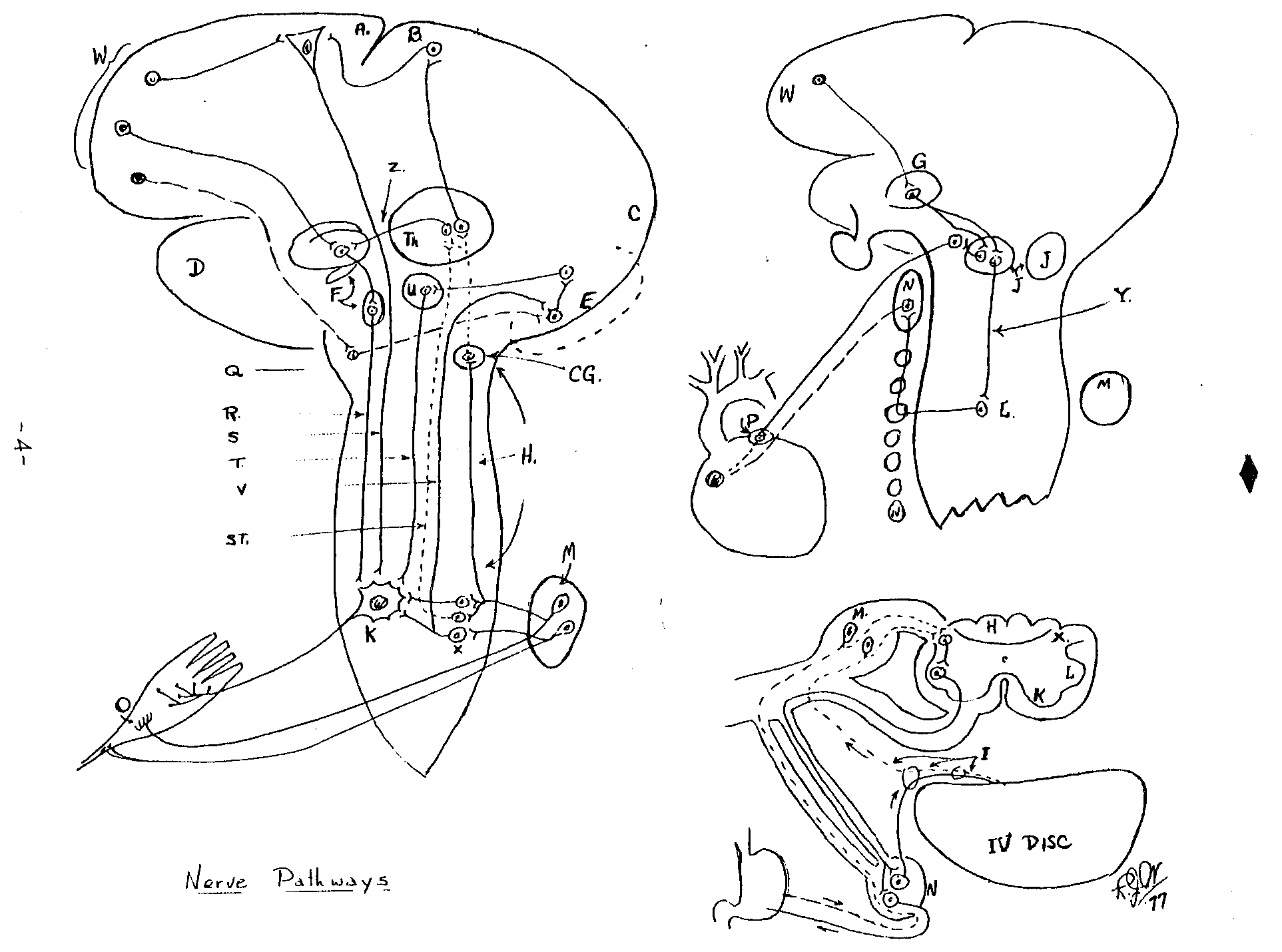 The many methods of adjusting developed through the past years have each been quite effective although there is a great variation in applicability. With the use of our new monitoring system we are finding that none of these old methods is wrong. However, with our new monitoring system we are able to perceive much more deeply the neurological processes and use the various methods to much better effect. We frequently find that a violently symptomatic subluxation should not be approached directly. Such a direct approach will frequently cause extension of the entire neuropathy even though it may abate some of the local symptoms. These are the conditions which we have previously explained as phases of “retracing”. In such cases an indirect approach by successively clearing apparently minor secondary subluxations will result in sufficient overall improvement that the major problem can be approached directly with excellent results. There have been times when as many as thirty different adjustments were utilized in succession over a two hour period of time with the final summation of correction into a complete recovery pattern. Usually there are intervening rest periods so we find the same process spread over several weeks. Attempts at a complete recovery in one day are almost always thoroughly frustrating in that after a certain point has been reached anything further seems to aggravate the whole problem of the neuropathy. A few days later the same approach will bring gratifying results. Therefore, it is imperative that any chiropractor trying to use this method be patient and not try to revolutionize his entire method of practice immediately. This monitoring system should be used for special problem cases at first with the idea that it will not tell us what or how to adjust but will give us an excellent indication of what not to adjust and when to quit.

Since a neuropathy is often a self-perpetuating entity of abnormal neurological events it reminds one of the Gordian Knot of Legend. This story tells of King Gordius tying a complex knot with no visible end as a challenge with a magnificent reward. To obtain an end for unraveling the puzzle the victorious youth cut through the knot with his sword to become the world conqueror, Alexander the Great. Frustrating cases tempt us to “cut through the knot” to find a starting point. Chiropractors are fortunate in that the aberration of physiology is still definitely related to body mechanics although the neuropathy may continue long after the original subluxation has subsided and been forgotten. Even though the entire process is quite obscure there is usually a reflex side effect in the form of some disturbance in body mechanics. Management of these inter-related effects fortunately gives us an access point into this vicious circle of self perpetuating pathological reflexes. Thus diligently applied chiropractic care, even though directed to a minor facet of the entire problem, is entirely capable of appreciably changing the neuropathy if intelligently pursued. Thus we find that instead of having to cut the rope in the Gordian knot there is always a loose end available to us. The fascinating possibilities of chiropractic when aided by the present monitoring system of vasomotor response is that we have a method of guiding an effective approach from the periphery of the process right to the heart of the neuropathy.

Another facet of the timing is based upon the relative stability or instability of various segments of the total pathological process. A recent single scoliosis based entirely upon a short leg can obviously he approached directly. When the same condition has progressed into a triple scoliosis we find that a direct approach will usually immediately help the lumbar spine but will cause new symptoms to arise in the compensatory scoliosis. As the last scoliosis is the least stable it will frequently be fluctuating into and away from symptom production. These unstable processes are usually directly and easily approachable. Therefore, during the entire management of the chronic scoliosis we must consider the various decompensations and the introduction of new instabilities as a temporary factor. This requires careful guidance and is very frustrating. The more thoroughly we can understand the relationship of these various factors, the more successful the total management. The constellation of dysfunctions and symptoms leading to organic pathologies have even greater ramifications and are much more difficult to evaluate. This is precisely how the vasomotor monitoring system is of immense value.