Quality of the Nerve Impulse

Long ago the gastrocnemius of a young frog was transplanted into the foreleg and given time for nerve regeneration. When the brachial plexus was then stimulated the gastrocnemius did not respond but when the lumbar plexus was stimulated the gastrocnemius contracted in the foreleg concurrent with the hindlegs. In a later experiment a band of skin was raised from around the torso of a young frog and was slipped to rotate 180 degrees. The nerve pathways were not disturbed except to trade peripheral endings. Tickling the frog’s back later caused the frog to scratch its stomach while scratching the stomach prompted back scratching. 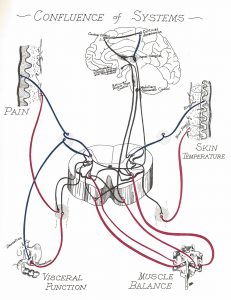 Hence the QUALITY of the nerve impulse — nerve imagery or “flavor” of the tissue — supercedes the mandate of the pathway. Even though instrumentation is not sufficiently refined to delineate all this neural mechanism we are certain that QUALITY of the nerve impulse is the primary element of control of structural and functional integrity. Aberration of this control is the fundamental element of the neuropathic process. It has been quite adequately demonstrated that induction of subluxations in experimental animals will produce symptoms in varying complex constellations of neuropathies. It is also true that the induced pathology will reflexly induce other variations in spinal mechanics. This definite neurological linkage between the numerous physiological systems of the body including those of visceral function and neuromuscular skeletal postural control is well established. The elaborate detailing of this inter-relationship is the object of many research projects. We are apparently quite fortunate at this time to have a new indicator which seems to give us a much deeper insight into neural integrity than ever before possible. With that we invite your participation in a much more rapid advance in the understanding of neurophysiology and of chiropractic.