Supplemental material written by Dr. R.J. Watkins, CMCC’s Dean of Clinics and Graduate Studies at the time of the Synchro-Therme project. Watkins authored the “Segmental Neuropathy of Kinesiology” portion of the text. The below was distributed at early seminars. 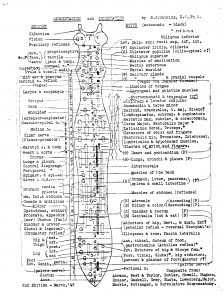 Body heat is generated by fuel combustion in the skeletal muscles and in the splanchnic viscera, particularly the liver which is the hottest spot in the body. This heat is gradually dissipated to the environment in order to maintain optimum body temperature. For the moment we shall by-pass the general body temperature control centers in the hypothalamus and in the medulla. Circulation of blood through the cutaneous capillary bed as a heat regulator is largely controlled by the vaso-constrictors to the peripheral arterioles. This is generally assumed to be under the control of the cell bodies lying in the paravertebral sympathetic ganglia. This type of vaso-constrictor control usually covers one to four segments per unit. There is an overlap of these fields, largely because this is a part of a generalized temperature control which is not specifically segmental. The sensory fibers picking up the temperature changes of the skin have their cell bodies lying in the dorsal ganglia from which the impulses are transmitted into the posterior horn of the cord. The connecting neurons then carry the impulses to the lateral horn preganglionic neuron which in turn synapse in the sympathetic ganglia. This forms a segmental arc for the vasoconstrictors. It had been noted some forty years ago that section of the posterior nerve root followed by a mechanical stimulus of the distal portion would result in vaso-dilation over that area of nerve distribution. This could not be construed to be through any action of the sympathetic ganglia because that portion had been isolated prior to the stimulus. Consequently it has been postulated in many different authoritative texts that vaso-dilator efferent fibers are going out beyond the dorsal root ganglia thru the sensory distribution. Some authorities have considered these to be antidromic reflexes which are reactions within various collaterals of a single neuron. Other authorities have postulated additional vasodilator cells lying in the dorsal horn which are independently sending out efferent vasodilator fibers. Regardless of the mechanism, we are finding consistently in our research that not only is the vasodilator effect closely segmental but that we even find independent action of two or more very narrow, well defined segments of vasomotor control within one vertemere.

In order to demonstrate these actions we have a drawing with the “Vasodilation” section of SEGMENTAL NEUROPATHY illustrating three segments of the spinal cord with three segments of skin complete with thermo receptors and with vasodilator fibers. In the seminar, this picture is animated to illustrate the flow of heat from the hotter thermal core of the body through the skin to radiate into the external environment. This is accomplished by the blood flow through the skin. All the sensory impulses arising from this dermal segment are following their efferent course through the dorsal root ganglia and into the posterior horn of the cord. Central recognition of these impulses is carried cephalad through the lateral spinothalamic tract to the thalamus and to the hypothalamus. The normal antidromic reflex, with the afferent flow from the thermo receptors in the skin to the cord and the necessary efferent responses comprise this segmental action. The exact neurological pathway used in each case is not critical at this time, since we have demonstrated the very close segmental demarcation.

One reason for delineating the mechanism of this segmental vasomotor control is to illustrate the interlace in the common pathways of this cutaneous vasomotor control with other functions of this same segment such as neuro-muscular balance, visceral control and various adaptations to painful stimuli. The visceral control likewise employs a segmental arc, comprising a sensory neuron with synapses at the lateral horn to secretory, vasomotor and motor fibers, plus the post ganglionic fiber which completes this arc. These pathways are not totally isolated but also communicate with less frequently utilized synapses to interconnect the somatic and visceral systems in a shunting mechanism whenever necessary. Thus we have a factual anatomical basis for viscerosomatic and somatic-visceral reflexes. We also have a good anatomical basis for intra-relationship between the segmental vasomotor control, neuromuscular control, and visceral control.

In order to more completely comprehend the significance of the segmental vasomotor control we have an additional animated drawing which illustrates the inter-relationship of adjacent segmental control through an internuncial neuron pool as illustrated by the gold rings. Thus there is close inter-relationship between adjacent segments of vasomotor control. Once this is understood, we add the inter-relationship of the adjacent sides of the spinal cord and their distribution. This is very dramatically illustrated with types of nervous eczema where the area of skin rash on one side of the body has a symmetrically matched area on the opposite side.

Nerve pathways involved with the symmetrical involvement of the eczema or the preceding vasomotor aberration, interconnection of circles integrating the internuncial pools on both sides of the spinal cord. This is the normal physiological response that we expect and which we try to restore from a position of dysfunction. Introducing a subluxation in one segment can cause a definite nerve interference or aberration of the normal physiological reflex. In such a case, the antidromic reflex is affected long before any subsequent structural changes take place. This is a stage where, due to the malfunction of the segmental vasomotor control, we can chill the skin temporarily, and then find a lag in return of the usual blood flow through the skin in the normal heat transfer. This normal segmental reflex is now in a state of malfunction, affecting first the single local unilateral segment as an acute condition which is usually quite readily corrected. If this persists for any length of time, it frequently spreads to affect the opposite side of the spinal cord. This spread to adjacent segments of vasomotor dysfunction is located with the Synchro-Therme. We have clinical evidence of functional collapse of this vasomotor control occasionally involving the entire thoracic and lumbar spine.

This massive loss of control, (vasodilation failure) indicates a chronic process which is well ingrained in the nervous system to form pathological reflexes of great stability. This presents an entirely different problem of normalization from that of the single acute involvement.

One interesting facet of this information is that we have three distinct types of spinal distortion:

a) A simple sprain with only minimum neurological damage. This is usually a temporary unilateral involvement and usually will clear quite rapidly with minimal care.

b) A more serious sprain which involves considerable neurological damage –which spreads beyond the localized segment and initiates a wide-spread neuropathy.

c) An adaptative distortion caused by this preceding neuropathy as a reflex subluxation. This may be symptom free or it may in turn initiate further neuropathies and form a much more extensive vicious circle of neurological dysfunction.

We have labeled the total normal sensory input of a segment from its thousands of sensory endings acting as monitors, THE NORMAL SENSORIAL CONVERSATIONAL TONE.

Since the neuromuscular, visceral and skin thermal control are mediated through the same segment, any aberration in the Normal Sensorial Conversational Tone will be reflected in all these systems. Hence an aberration in Spinal Kinesiology may be a pathogenic subluxation or may be a reflex symptom distant from the prime neuropathy. Here enters the art of interpretation of the scientific findings of the Synchro-Therme. Further to the clinical significance of Segmental Neuropathy and the kinesiology aberrations are the considerations of neurological ramifications.

RAMIFICATIONS OF A NEUROPATHY

Hematopoiesis has periodically been demonstrated to be under autonomic nerve control since Reitler in 1924. 5 minutes of Faradic sympathetic stimulus will consistently elevate both RBC and Hgbn 20% or more.

Leukocytosis can be caused by intermittent ocular pressure until the WBC reaches 20,000. Nearly total leukopenia with WBC near zero follows 10cc injection of 20% peptone while a denervated leg in the same animal shows practically no change in WBC. Capillary permeability and peripheral drift of leukocytes have both been shown to be under autonomic nerve regulation. All these seldom-mentioned neurological functions are discussed by Kuntz (Autonomic Nervous System) and others.

The Control of Immunogenesis by the Nervous System is the title of a book by Gordienko with 21 chapters delineating many hundreds of experiments to unquestionably establish the fact that antibody production is NOT a direct antigen – cell response, but rather that the antigen acts as a specific nerve stimulus initiating reflexes to produce antibodies in the host whose blood stream is completely free from antigen. Research from Metchnikoff, Reitler, et al to A.D. Speransky is repeated and evaluated by Gordienko. Kuntz has an entire section on “Nervous Regulation of Immune Reactions” which he summarizes the good or bad “effects of immunization are utterly dependent upon the functional integrity of the Autonomic nervous system”. This places a much different light upon the conflicting reports of the casualties from mass immunization programs.

Therefore, we feel that in light of such findings, many previous recoveries in chiropractic offices which have raised doubt in orthodox thinking may well be reconsidered. It becomes quite conceivable that chiropractic is not just a matter of spine straightening nor is it just good for sprains, strains and some headaches.

Gordienko, AN. Control of Immunogenesis by the Nervous system. National Science Foundation. 1960.

Speransky, A. D., A Basis for the Theory of Medicine. International Publishers, NY, 1943.