A letter from Dr. Petersen on CMCC stationery distributed to the profession describing the evolution of his relationship with Dr. Himes. 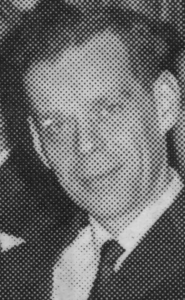 The Council on Education of the American Chiropractic Association was privileged to hear an address by Dr. H.M. Himes at their mid-year meeting held in Des Moines, Iowa, in January 1966.

In this address, Dr. Himes, speaking on behalf of the Board of Directors of our College, extended the invitation (for the second time) to all Colleges to join CMCC in its programme of instrumentation, research and development.

If it were not for the fact that we personally feel that this speech represented our best thoughts and deserved to be brought out from behind-the-scenes, you would not otherwise have the chance to read it. This is not the only reason that this speech is reprinted here. I have a personal interest in that moment when this speech was delivered. For you to appreciate my feelings on this subject I must tell you some of the background events that occurred over the past fifteen years which lead up to that moment.

There was a time, many years ago, when Dr. Himes and I stood on opposite sides of many philosophical arguments over what I considered to be Palmer “Dogma.” To test the point of these arguments a two-channel temperature recorder was built in 1950 especially constructed to monitor that thermal phenomenon which had been theorized to be the physical expression of an increased resistance to the flow of nerve energy. When this device was completed, Dr. Himes was among the first to view the graphic reproduction of the phenomenon.

From that time until much later in 1959 I spent all of my efforts, constructive as well as destructive, in private “in-fighting” with B.J. over the issue of the worthlessness of the Neurocalometer, its use, and the theories of its interpretation. During this time there were quieter moments when I sat and discussed the various weaknesses and strengths of B.J.’s peculiar personality with Dr. Himes. Again, Dr. Himes was the first to break through my blind “hate and discontent” to show me the miracle of this man. It has always been a pleasure to listen to the measured reasoning of Dr. Himes, who, even though he worked in what I considered the “enemy camp,” gave sage advice to friend and foe alike.

In 1959 Dr. Himes was among the first to view the final and conclusive evidence that the Neurocalometer was scientifically inadequate. Proof of this fact was obtained from special test equipment designed to test the accuracy of the Neurocalometer in detecting thermal change under controlled conditions.

From that moment on, I recall two men who had the courage of their convictions that this data having now established the fact, were willing to STAND UP AND BE COUNTED on my side. One of these men was Mr. Otto Schniernbeck, head of the Neurocalometer Department of PSC. The other man was Dr. Herbert M. Himes.

Following this event Dr. Himes appointed to initiate a series of private conferences between the faculty and myself which were to be conducted along constructive lines. Just prior to this appointment, the first attempt at such a conference under Dean Hender, ended abruptly within inches of physical violence between a faculty man who taught NCM and myself. Dr. Himes was the first to successfully complete a constructive series of conferences on these matters.

I would like to state here that a great many wonderful advancements would have come out of Palmer at that time if Fate had not stepped in and changed the course of events with B.J.’s death.

Shortly thereafter Dr. Himes and I departed that scene only to meet once again under very different circumstances in March of 1964. It was then that I received the greatest compliment anyone can receive for his ideas. It was at that time Dr. Himes staked his health and future well-being on the proposition that this new concept, system of instrumentation, and particular method of application, was more useful than any of the older ways of practice.

All of this brings us to the point of his speech. By giving you some of the background which preceded that moment, I hope to help you share with me some of the feelings I have regarding this man and his Innate courage to STAND UP AND BE COUNTED.