Tom Morris was the lead council in the landmark Morikubo case. He planned the strategy along with B.J. Palmer and Morikubo. The case established chiropractic as a separate and unique profession based on its philosophy, science, and art. The strategy worked so well that Morris’ firm won 85% of the 3,500 cases for the next 20 years. He was the chief legal counsel to B.J. Palmer’s Universal Chiropractor’s Association.

According to Turner’s Rise of Chiropractic, the strategy worked so well that Morris’ firm won 85% of the 3,500 cases for the next 20 years.

Tom Morris was the chief legal counsel for the United Chiropractors Association until his death in 1928. He also orchestrated the “go to jail” for chiropractic campaign that was initially successful in states like Ohio and California.

Since the histories by Rehm and Keating were published the facts of the Morikubo trial have been updated and revised. The traditional viewpoint, which started with Lerner’s flawed report, was that Morris was the savior who came in and devised the miraculous legal strategy by relying on “Langworthy’s” book. We now know several additional facts such as: Morikubo and B.J. Palmer helped to plan the defense, Morikubo went to LaCrosse in order to test the law, there is no evidence that the defense used the book Modernized Chiropractic IMorikubo even states that they did not use it), and the science and philosophy of chiropractic were well established for at least five years or more prior to the case.

So, B.J. did not jump at Morikubo’s plight and fortuitously locate Morris. It was all staged and planned.

We also now know that the there at least one other important legal case, of which OG Smith was the expert witness. The Brunning case is described in the book The Chiropractor’s Protege.

Bias in the Literature

What is also clear in the histories of Rehm and Keating is an unfounded bias against philosophy in chiropractic. For example, Rehm writes, “In 1907, the chiropractic profession entered the ‘esoteric realm of philosophy; but for the first time it had a successful legal argument. Some in teh profession undoubtedly winced at the notion (and still do).”

Firstly, D.D. Palmer used the term “intelligence” as early as 1872 and the term “dis-ease” in 1887. He wrote of Innate and Educated in 1902 and of Universal Intelligence in 1905. Furthermore, both B.J. Palmer and Morikubo had arleady published on these topics. Not only did Morikubo cover B.J.’s philospohy courses in 1906 while BJ was traveling, but he published a full page aritcle on The Science of Chiropractic in January 1907 in LaCrosse.

Some of these specific errors are being used to prop up arguments against philosophy and subluxation in chiropractic. Some examples from recent literature include articles by Perle (pdf), McGregor et al, and Kimura et al.  It is time that the profession fixes these mistakes and that peer-reviewers reject papers that include them. 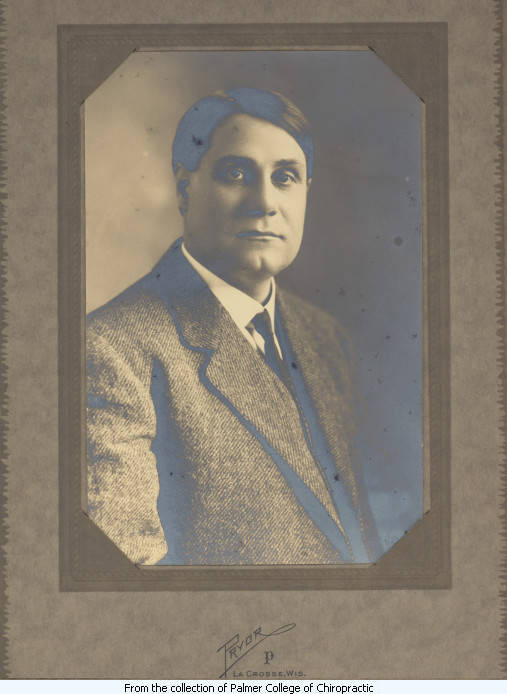 Ladies and Gentlemen: It is surely gratifying to have this opportunity to speak a few words to this splendid group of people. I didn’t suppose that I would be asked to say anything, because I have always felt and still feel that when Dr. Palmer, our great leader, is to speak, no one else should be permitted to take any part of his time on the program. But he has asked me to say a few words, and I shall endeavor to do so. And as the hour is late, I shall come, or endeavor to come, at once to the point I have in mind.

I have listened very carefully to what the Doctor has had to say, and I believe I know just what he has in mind. I wonder, however, if you all realize that he is not joking-that he means what he says –and that he has outlined accurately what the position of the UCA will be in the future in regard to “cleaning house” professionally. (Applause.)

The situation professionally today, as you must know, is deplorable–and it is a culmination-the result of a series of blunders-some made in good faith, some intentionally, which have resulted in a condition professionally that is not only disgraceful but surely means the destruction of Chiropractic, at least as a distinct science, in the very near future, unless checked.

And the task of checking this deplorable trend of affairs must be the work of the UCA from now on until the profession has cleaned house. The work must be done by the UCA, not only because the profession seems oblivious to the situation, but also because if the UCA does not do it, the public will.

As Dr. Palmer has said, during the early years, the ~·s work consisted almost wholly in defending members against prosecutions for practicing medicine without a license and in malpractice cases. But its field is now broadened and it is now entering upon a .new era. That its work in the past has been successful, there can be no doubt, nor has there ever been. And that it may meet with success in the larger field is devoutly to be wished.

The problem originally was to educate the public. And now that the public is reasonably well informed, strange as it may seem, the work of the future will be to educate the profession itself. This may seem to be an overstatement of the situation, but the fact is that a very large proportion of the profession has wandered from the fold-the Chiropractic fold. Many are practicing systems foreign to Chiropractic, under the name of Chiropractic. This condition of affairs is deadly to Chiropractic as a distinct science. Hence the necessity for cleaning house within the profession. It is astounding to me that at the close of the second Chiropractic decade, that there still exists in the · minds of its practitioners, two theories as to what Chiropractic is-that there should be mixers.

There never was any doubt in my mind but that we would succeed in the fight with the medical men. But there is some doubt whether we shall be able to succeed completely in the fight against the mixers-to keep the profession clean. To begin with I fear that we–;-the straights-are out- numbered, and m the second place all the mixers seem to care about is money grabbing – having little or no regard for the science itself. And yet I am hopeful and try to view the situation from an optimistic standpoint.

But I want to say to you, friends, that the UCA is going into this fight regardless of what the issue may be. And it is doing that without hesitancy. And it is in dead earnest. And believing as we do that it is right, we say to you now that it doesn’t make any difference whether we win or lose, the opposition will know when the fight is over, if it ever is, that they have been in a real fight. (Applause.)

And the sooner everyone realizes that this move on the part of the UCA is in earnest, the better. And the sooner everyone realizes that and accepts it as a fact, the sooner the fight will be over. The Chiropractic house must be cleaned. And the UCA will do it. (Applause.) The things that are harmful must be stopped, not because a practitioner hasn’t the right to make his own contracts .and conduct his business in his own way, but because he must no longer be permitted to make a dishonest and fraudulent contract under the name of Chiropractic. (Applause.)

The hour is late. I couldn’t say much more if I talked an hour. And so I will close by saying that the issue of today, the fight of the future, will not only be along the lines of our differences with the medical men-against the medical men-but against the mixers, the compromisers, the men who would “sell their souls for a mess of pottage.” (Applause.)

As above, so say we all – who knew the facts. There is a friction in progress and progress only comes from friction, so give it to us; hand us the mittful and put a horseshoe in the mitt. The more of California, Utah and some other states we get the stronger we grow.

Up in Vermont is a newspaper which has been handing us a page ad against us every week. It is written by meds. It does say some nasty things in nasty language; there being little truth in any of it, it doesn’t hurt but boosts us. When any man says the truth, strikes square on facts, and then says them in a nasty way about some other people, that’s another thing again. Facts are always permissible. However, that paper has none.

Now comes a paper from Michigan which has a half page which has been written and printed by the meds of that county. They claim they are going to make it a regular thing. We hope they do. So long as they continue TO LIE about us, they do us good. But if anything they said against us WAS TURE, I would worry about our future. So, rave on M.D.’s.

Recently the meds of Michigan held a state meeting. Dr. McLean, president, urged upon them a statewide publicity campaign to overcome the “widespread cooperative national publicity campaign” conducted by the fakirs – meaning you and I. I am for’em. I hope they do get into that campaign. They’ll either have to lie or tell the truth. If they LIE they help us and, if they tell the truth, they don’t hurt us. Lay on!

The Iowa meds recently passed a resolution endorsing a statewide campaign for education to build up a statewide political movement to elect nothing but doctors in the next legislature to overcome the effect of the thing which landslide them this last winter. We’re for ‘em. The more money they spend, the more it forces us to come out of our shell; and that forces us to build strong. I’m for publicity, either side, both stories. I am glad to see the meds getting into the limelight. The more they have to say and the quicker they say it, the less they’ll have to say and the quicker they will have said it – because it isn’t much at best.