Shegetaro Morikubo was one of the early leaders of chiropractic. He is most famous for following in D.D. Palmer’s footsteps and getting arrested for practicing medicine, osteopathy, and surgery without a license.

Unlike D.D., who spent 23 days in jail, Morikubo’s case was won and set a precedent. Chiropractic was separate and distinct from osteopathy. (Check out my blog post about some of the mistakes in the literature on the topic.)

I have researched and written about his life. 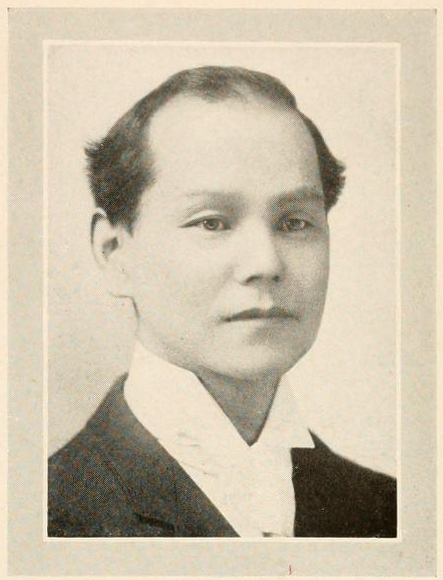 I thought we knew all that we could about him. He grew up in Japan. Descended from an aristocratic Buddhist family in the province of Kanagawa. After his trial, he married and then taught and practiced in Minneapolis. I have read every article that I could find by him written between 1904 and 1922.

I was just completing a lecture series on his life for TIC (and for CE)* when I found out something new!**

Morikubo was a Novelist and Read Shakespeare

Last week I got a surprise email from John Wolfe. Dr. Wolfe is a chiropractic historian, the editor of Chiropractic History, and an associate professor at Northwestern College of Chiropractic. He is also one of the leading Morikubo historians in the world.

Wolfe just found this news article from 1895. It is the earliest known writing we have about Morikubo.

There are several interesting things here. The article refers to him as Shigal (I don’t know much about Kanji but it sounds pretty close to Shegetaro). It also supports some other documents such as his age, his ancestry, when he came to the U.S., and that he was a student in California. (I tried to find historical documents about his early schooling from the Berkeley archives to the Tokio Academy with no luck.)

Furthermore, we learn that he studied English with a tutor and read Shakespeare, Irving, Hawthorne, and Longfellow.

We also learn that he is a budding young novelist who aspired to write a history of Japan. This helps us to make sense of his future plays on Japanese Marriage as well as his several lectures and articles on religion and politics in Japan.

The guy was very interesting.

We know that Morikubo covered some of B.J. Palmer’s lectures in the fall of 1906.

B.J. Palmer did not record his lectures from that year. The first chiropractic green book solely authored by B.J. came out the following year and it was based on his winter 1907 lectures.

Morikubo’s first article on the philosophy, science, and art came out in January 1907. (This was a full 8 months before the infamous trial.) The article included many of the early concepts that would appear in B.J.’s Vol 2.

In my lecture series at The Institute Chiropractic, I delve into some of Morikubo’s writings on the philosophy of chiropractic. In this video, I capture some of his more interesting contributions. I recreated two of his drawings as animation from a 1915 article called Chiropractic Philosophy.

A History of Ideas

Historical information about the foundational paradigm of chiropractic is still being discovered. It is an exciting time for the profession.

*The lectures on the early leaders in chiropractic will be posted soon as part of the Chiropractic Principles online continuing education program.

**Members of The Institute Chiropractic get access to all of the lectures plus tons of content (over 50 hours) as well as discounts for the CE courses.