Alf Breig’s classic textbook, Adverse Mechanical Tension in the Central Nervous System is one of those rare books that stands the test of time for many reasons. Not only did it lay new ground in our understanding of the structures of the spinal cord and nerve roots but it has impacted the chiropractic profession in many ways.

I have studied the 1978 book for almost two decades. I even utilized it in my recent talk at Sherman’s IRAPS in October, 2014.* The book is still groundbreaking and nearly impossible to find. (Used copies range from $500-$800 on Amazon.) I have dreamed of making it available to the next generation of chiropractors.

Thanks to the wonderful compilation of his work by Michael Shacklock, Breig’s contributions are now easily available. Shacklock included 80% of Breig’s 1978 book and combined it with the best of Breig’s 1960 book on the biomechanics of the central nervous system. Also thanks to Shacklock, the book is now available at SenzonOnline.com.

I am impressed by the quality of Biomechanics of the Nervous System: Breig Revisited. The images from Breig’s original texts were reproduced on glossy paper and are worth the price of the book.

Images include photographs of cadaver spinal cords in flexion and extension (showing the stretching of nerve roots and meninges), diagrams of force dynamics through the cord, and histograms of the meningeal collagen fibers in relaxed and tense states (reproduced as the cover’s background).

Breig’s clinical and experimental work on the biomechanics of the central nervous system are typified by his observations that postural flexion and extension lengthen and slacken the spinal cord by 5-7cm. This fact was most recently referenced in relation to the dangers of forward head carriage (with texting),** but its greatest impact on the profession relates to theories about the ideal spine’s cervical lordosis and also the role of the stress response on the structures of the spine (by both Ward and Epstein).

Several chiropractic techniques such as Spinal Column Stressology, Chiropractic Biophysics, and Network Spinal Analysis base some of their models on Breig’s concept of Adverse Mechanical Cord Tension. Epstein’s model of vertebral subluxation includes the facilitated subluxation and also an extension of Panjabi’s spinal subsystems to include the meninges as passive transducers of force.

Breig’s book is referenced in a wide range of vertebral subluxation based case studies on SOT and asthma, Torque Release and cocaine addiction, as well as Attention Deficit/Hyperactivity Disorder in the chiropractic care of children and in relation to cervical kyphosis.

Breig’s work is also cited in literature reviews such as the compendium of references supporting Applied Kinesiology and listed in the references to Peter Rome’s Neurovertebral Influence Upon the Autonomic Nervous System: Some of the Somato-Autonomic Evidence to Date.

Philosophy of Chiropractic and Breig

The philosophy of chiropractic has always included a mix of theory, hypothesis, and philosophy. Two of the most important philosophy texts from the last century were Drain’s Chiropractic Thoughts and Stephenson’s Chiropractic Textbook. Both books explore theories of spinal cord tension and pressure.

Kent made the connection between Stephenson’s observations that cord tensions and pressures (see image) may lead to impingement of the cord and Breig’s theory of adverse mechanical tension. Breig demonstrated that stretching the tissues of the cord reduces transmission. 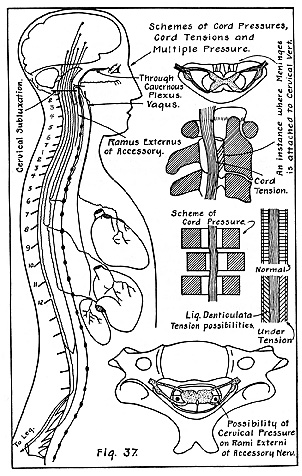 But the real philosophical element has to do with dynamic forces. How the innate intelligence adapts to the forces from the environment is central to the philosophy of chiropractic and distinguishes the chiropractic paradigm. (I wrote a bit about this in relation to the art of chiropractic last year.)

Breig described the transmission of forces along the pons-cord tract in relation to Saint-Venant’s Principle, which explains force dynamics along an elastic cylinder. When stress or load is distributed along a cylinder the distribution gets weaker the farther apart the distances get. For example, pulling (flexion) of the cervical spine stretches the dura of the lumbar spine. Extension relaxes the pons-cord tract.

Breig even suggested that a branch of medicine was being established with his work. He referred to it as, histodynamics, which deals with “the effects produced on cell elements by the action of dynamic forces.”

In my presentation at IRAPS, I discussed a paper written by Donald Epstein, Dan Lemberger, and myself (in review), describing the research of mathematical engineers at UC Irvine. The researchers explored the Network Wave using surface electromyography and have suggested that the Breig neurosurgery paradigm offers a viable explanation for understanding the oscillation of vertebra. They suggest that a feedback loop is created due to the mechanoreceptor signals at dural attachments in the cervical and sacral spine.

In the paper we suggest that there is an endogenous reorganizational system on the edge between the stress system (spinal cord flexion) and the relaxation system (spinal cord extension). The reorganizational system is congruent with the philosophy of chiropractic’s perspectives on adaptation, innate forces, and innate expression. Breig’s model is central to understanding this system. In fact, Breig’s work applies to just about any chiropractic theory, model, or technique!

*IRAPS 2015 call for abstracts has been announced. Please submit your abstract now to the only peer-reviewed conference on the philosophy and science of chiropractic.

**The article by Fishman suggests that Breig was a Nobel Laureate. He was not.