After listening to this lecture, Dr. Gregg Rubinstein, philosophy chair of the NYCC wrote,

“Green Books, Blue books I have read a lot of them… but no one gives you the historical perspective of our profession’s rich philosophical development like Simon does! It was like walking through history with his awesome collection of photos and stories I never heard before!”

If you enjoyed this short segment, please check out the previous blog post called Chiropractic Lineage. Please check back often as new courses and articles will be posted in the near future.

This lecture was the beginning of a talk given by Dr. Senzon on September 28, 2013 at the New Yorker Hotel for the New York Chiropractic Council’s Saturday Night Live in conjunction with the League of Chiropractic Women’s Art of Brilliance Seminar. The rest of Dr. Senzon’s talk will be available soon.

The lineage I am most excited about lately is what I am referring to as The D.D. Palmer Philosophy Lineage. It is a way to explore the philosophy of chiropractic more completely. 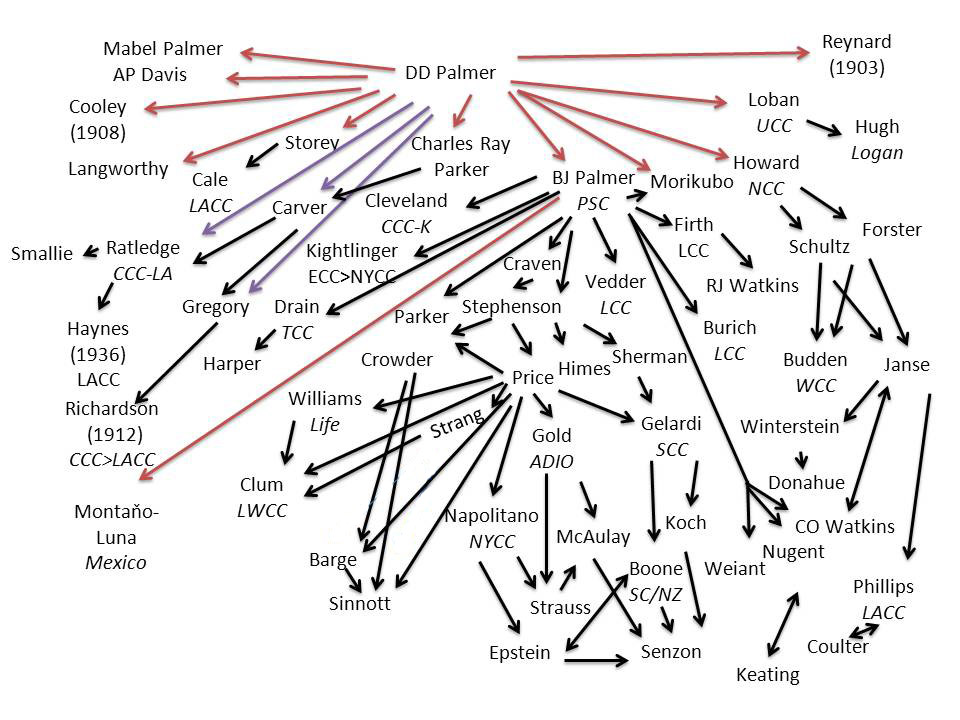 As one of my philosophy professors once asked, how can you develop a philosophy if you don’t know what came before you? By exploring the developments in the philosophy from each of these individuals (and more), we may evolve the philosophy further than it has gone before.

After inventing chiropractic and opening his school in the late 1890s, D.D. Palmer traveled extensively between 1902 and his death in 1913. He opened schools all over the United States from Davenport to Los Angeles, Oklahoma City to Portland, Oregon. He encouraged his students to “practice and teach,” the new science, art, and philosophy of chiropractic. And they did.

By exploring the writings of his actual students, we may begin to explore the impact he had on the philosophy of chiropractic in some interesting ways. We may even better understand Palmer himself, as seen through the eyes of his disciples.

Three of his students I am currently fascinated by are Tullius de Florence Ratledge, C. Sterling Cooley, and A.T. Godzway. Each of these students met Palmer during his time in Oklahoma and studied with him in 1907.

This was just after Palmer spent 23 days in jail for practicing medicine without a license. He moved to Medford, Oklahoma, with his new wife (his fifth) and went into the grocery business for a short time. He also maintained a small clinic and school out of his home.

D.D.’s brother T.J. Palmer (publisher of the Medford Patriot), loaned D.D. $300 so that he could move to Oklahoma City and open a school. He opened the Palmer-Gregory School of Chiropractic in 1907, with Alva Gregory (a Carver-Denny grad). D.D. remained as part of that school for nine weeks due to Gregory’s teaching of medical concepts. (I wonder what D.D. would have thought when Gregory’s wife changed the name of the school in 1939 to the Palmer Gregory Chiropractic College and School of Physiotherapy?)[5]

In the spring of 1908, D.D. formed his own Palmer Fountain Head School also in Oklahoma City. By November of 1908, D.D. and his wife moved to Portland, Oregon and opened the D.D. Palmer College of Chiropractic. It was in Portland that D.D. penned his magnum opus, The Chiropractor’s Adjustor, where he sought to “adjust” the misconceptions of other chiropractors as to what chiropractic science, art, and philosophy really were.[5, 6]

Ratledge was an amazing individual. He received his chiropractic degree from Willard Carver. Carver opened the Carver-Denny School of Chiropractic in 1906 in Oklahoma City.[7]

Ratledge also attended D.D.’s lectures in 1907. He had Palmer and his wife, Mary, over for dinner often. They discussed all things chiropractic far into the night. D.D.’s final teaching appointment was at Ratledge’s school in Los Angeles from 1912-1913.[8]

I recently discussed aspects of Ratledge’s legacy with Drs. Kent and Gentempo.[9] Here is the conversation turned into a short video:

Cooley was another fascinating individual. He and his father both studied chiropractic under D.D.’s tutelage in 1907. Cooley’s father was a non-practicing medical doctor. Both were so amazed by Cooley’s recovery and healing at the hands of D.D. that they became chiropractors. In 1943, Cooley wrote,

“The interest of my Father and myself was due, in part to the promptness with which the strange exponent of Innate Healing Intelligence freed me from an affliction which had defied the best of orthodox methods. Daniel David Palmer rescued me from invalidism and helped me to health. The chances are that, except for the ministrations of his gifted hands, guided by a mind which seemed never to err or falter in expressing Chiropractic principle, my voyage on “Life’s tempestuous sea” would have ended years ago.”[5]

Cooley was instrumental in leading the early NCA (the 1930s merger between the UCA and the ACA), which became the current ACA in 1963. So it is important for us to understand his philosophy of chiropractic, especially since he was a lifelong disciple of D.D., whom he referred to as “The Old Master.” I have posted several of Cooley’s articles on D.D. Palmer as well as a few other pieces he wrote.[10-14] My hope is that such a first-hand account may help us to better understand D.D. and his impact on the full spectrum of philosophy in chiropractic. (Cooley also wrote six essays on D.D.’s life in James Drain’s 1949 book Man Tomorrow.)

Only by learning all that we can about D.D. Palmer and the writings of his students can we begin to make sense of the challenges facing the profession today. They planted the seeds we now sow.

This Oklahoma lineage of D.D.’s students would not be complete without a glimpse at A.T. Godzway, formerly EL Cooley, classmate and father of CS Cooley. According to Godzway, he bore the brunt of D.D.’s famous temperament. D.D. referred to A.T. as the “old medical fool.” This helps us to better understand D.D. as a man, with faults and challenges, like any of us. It also helps us to see how Palmer dealt with the medical paradigm. Most importantly, it gives us yet another glimpse into the first hand teaching from D.D. to one of his students.[15]

By exploring the writings of each of D.D.’s students and subsequently, their students, we may begin to piece together the puzzle that is the philosophy of chiropractic. While the most familiar and widely taught components of the philosophy came directly from the Palmer school, the seeds that D.D. Palmer planted were many. Which of those early students grew those seeds into important philosophical approaches to Innate, healing, subluxation, and life itself? Which ones took D.D.’s philosophy in a completely different direction, a direction he may not have approved of?

The only way to truly find out the answers to these questions is to go back and reconstruct the lineage. Only then may we move forward. Knowing what came before and knowing the pioneers of each chiropractic idea helps us to move forward into the future.

* Republished with permission of the Association for the History of Chiropractic.

** Republished with permission of the ACA.

***Ratledge school list was quoted from: Wiese, G., and Callender, A. How Many Chiropractic Schools? An Update. 2007. Chiro Hist.*