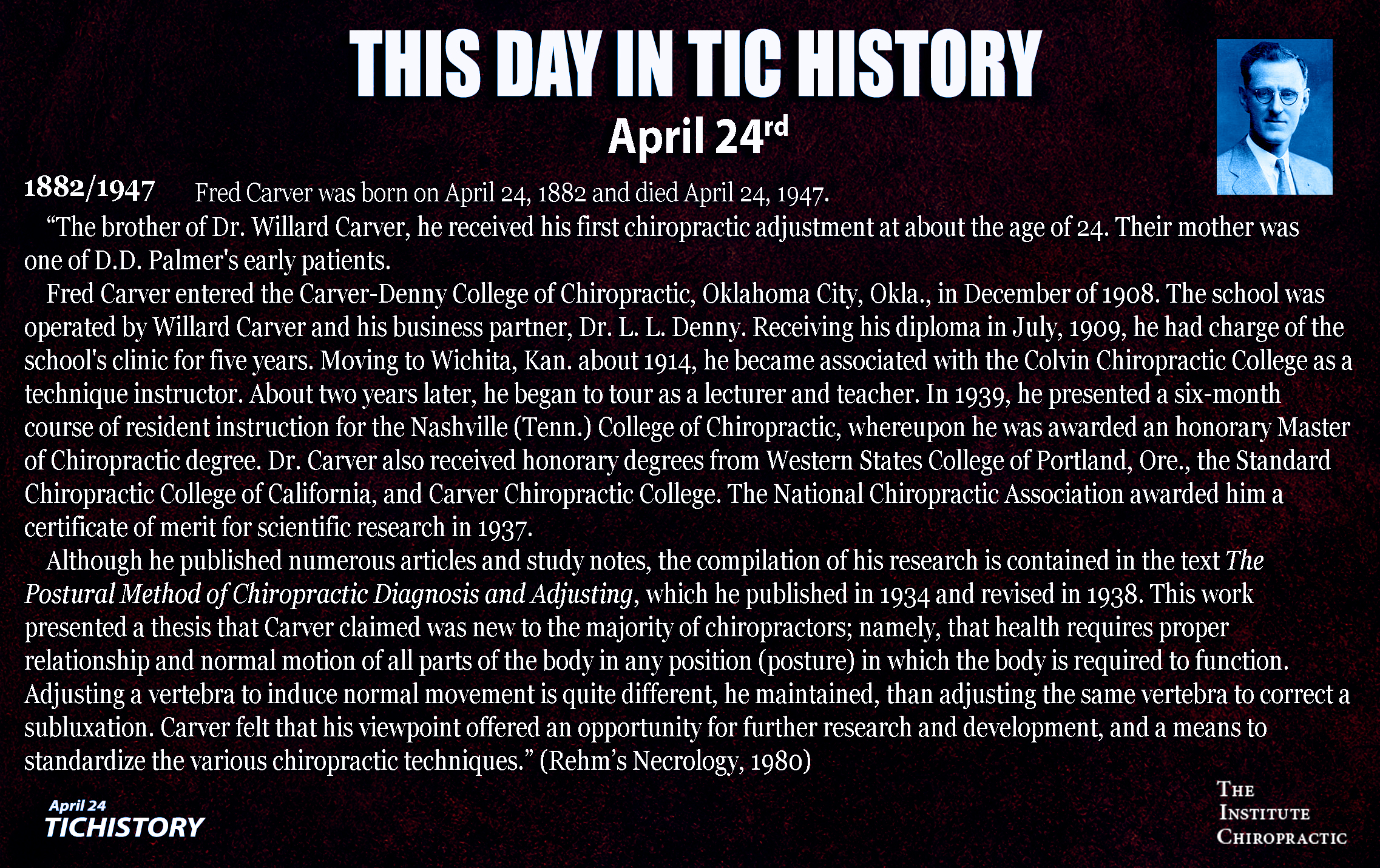 “The brother of Dr. Willard Carver, he received his first chiropractic adjustment at about the age of 24. Their mother was one of D.D. Palmer’s early patients. Fred Carver entered the Carver-Denny College of Chiropractic, Oklahoma City, Okla., in December of 1908. The school was operated by Willard Carver and his business partner, Dr. L. L. Denny. Receiving his diploma in July, 1909, he had charge of the school’s clinic for five years. Moving to Wichita, Kan. about 1914, he became associated with the Colvin Chiropractic College as a technique instructor. About two years later, he began to tour as a lecturer and teacher. In 1939, he presented a six-month course of resident instruction for the Nashville (Tenn.) College of Chiropractic, whereupon he was awarded an honorary Master of Chiropractic degree. Dr. Carver also received honorary degrees from Western States College of Portland, Ore., the Standard Chiropractic College of California, and Carver Chiropractic College. The National Chiropractic Association awarded him a certificate of merit for scientific research in 1937.

Although he published numerous articles and study notes, the compilation of his research is contained in the text The Postural Method of Chiropractic Diagnosis and Adjusting, which he published in 1934 and revised in 1938. This work presented a thesis that Carver claimed was new to the majority of chiropractors; namely, that health requires proper relationship and normal motion of all parts of the body in any position (posture) in which the body is required to function. Adjusting a vertebra to induce normal movement is quite different, he maintained, than adjusting the same vertebra to correct a subluxation. Carver felt that his viewpoint offered an opportunity for further research and development, and a means to standardize the various chiropractic techniques.” (Rehm’s Necrology, 1980) 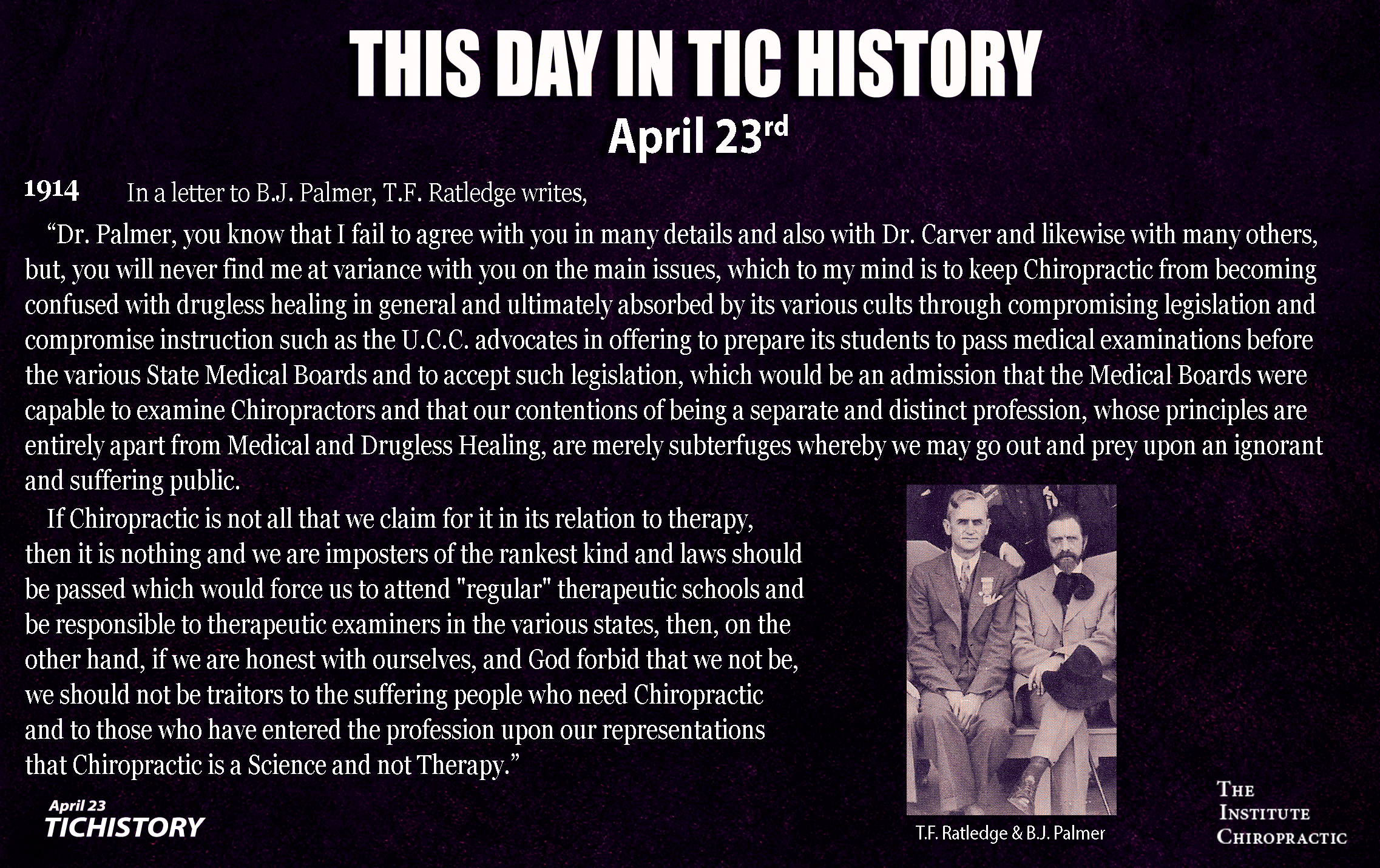 In a letter to B.J. Palmer, T.F. Ratledge writes,

“Dr. Palmer, you know that I fail to agree with you in many details and also with Dr. Carver and likewise with many others, but, you will never find me at variance with you on the main issues, which to my mind is to keep Chiropractic from becoming confused with drugless healing in general and ultimately absorbed by its various cults through compromising legislation and compromise instruction such as the U.C.C. advocates in offering to prepare its students to pass medical examinations before the various State Medical Boards and to accept such legislation, which would be an admission that the Medical Boards were capable to examine Chiropractors and that our contentions of being a separate and distinct profession, whose principles are entirely apart from Medical and Drugless Healing, are merely subterfuges whereby we may go out and prey upon an ignorant and suffering public.

If Chiropractic is not all that we claim for it in its relation to therapy, then it is nothing and we are imposters of the rankest kind and laws should be passed which would force us to attend “regular” therapeutic schools and be responsible to therapeutic examiners in the various states, then, on the other hand, if we are honest with ourselves, and God forbid that we not be, we should not be traitors to the suffering people who need Chiropractic and to those who have entered the profession upon our representations that Chiropractic is a Science and not Therapy.” 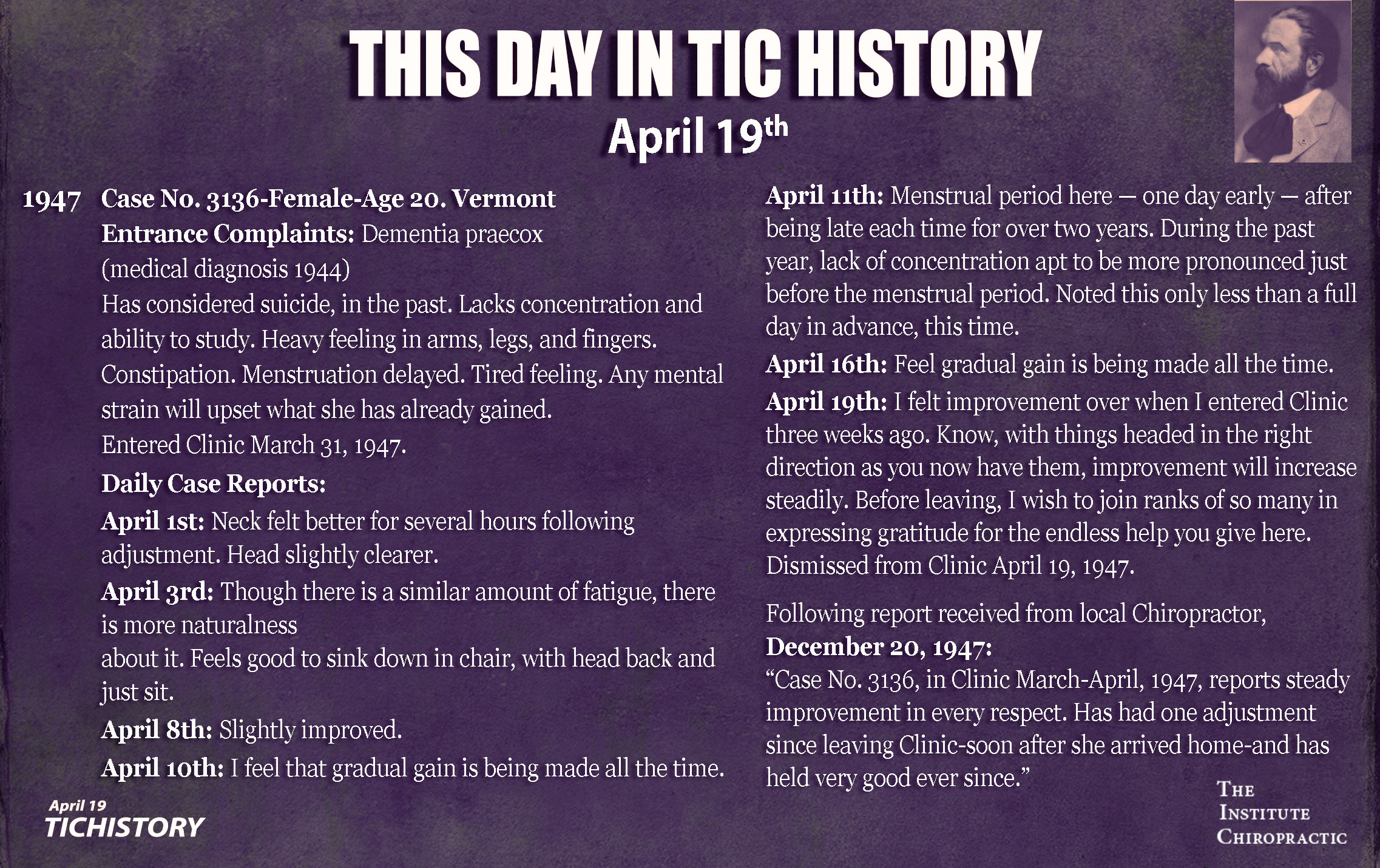 Case No. 3136-Female-Age 20. Vermont Entrance Complaints: Dementia praecox (medical diagnosis 1944) Has considered suicide, in the past. Lacks concentration and ability to study. Heavy feeling in arms, legs, and fingers. Constipation. Menstruation delayed. Tired feeling. Any mental strain will upset what she has already gained.

April 3rd: Though there is a similar amount of fatigue, there is more naturalness about it. Feels good to sink down in chair, with head back and just sit.

April 8th: Slightly improved. April 10th: I feel that gradual gain is being made all the time.

April 11th: Menstrual period here — one day early — after being late each time for over two years. During the past year, lack of concentration apt to be more pronounced just before the menstrual period. Noted this only less than a full day in advance, this time.

April 16th: Feel gradual gain is being made all the time.

April 19th: I felt improvement over when I entered Clinic three weeks ago. Know, with things headed in the right direction as you now have them, improvement will increase steadily. Before leaving, I wish to join ranks of so many in expressing gratitude for the endless help you give here. Dismissed from Clinic April 19, 1947.

December 20, 1947: “Case No. 3136, in Clinic March-April, 1947, reports steady improvement in every respect. Has had one adjustment since leaving Clinic-soon after she arrived home-and has held very good ever since.” 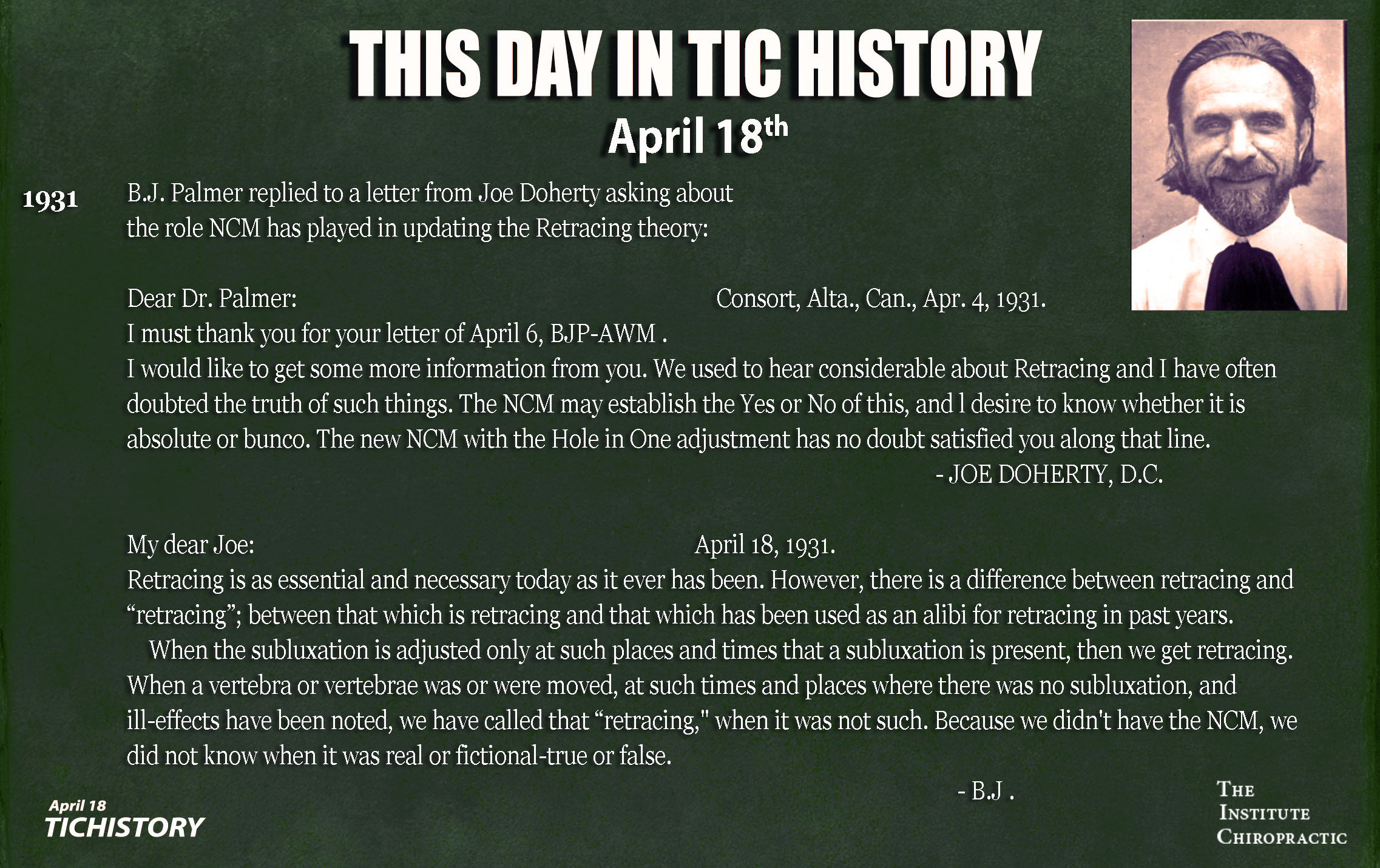 B.J. Palmer replied to a letter from Joe Doherty asking about the role NCM has played in updating the Retracing theory:

I must thank you for your letter of April 6, BJP-AWM . I would like to get some more information from you. We used to hear considerable about Retracing and I have often doubted the truth of such things. The NCM may establish the Yes or No of this, and l desire to know whether it is absolute or bunco. The new NCM with the Hole in One adjustment has no doubt satisfied you along that line.

Retracing is as essential and necessary today as it ever has been. However, there is a difference between retracing and “retracing”; between that which is retracing and that which has been used as an alibi for retracing in past years. When the subluxation is adjusted only at such places and times that a subluxation is present, then we get retracing. When a vertebra or vertebrae was or were moved, at such times and places where there was no subluxation, and ill-effects have been noted, we have called that “retracing,” when it was not such. Because we didn’t have the NCM, we did not know when it was real or fictional-true or false. 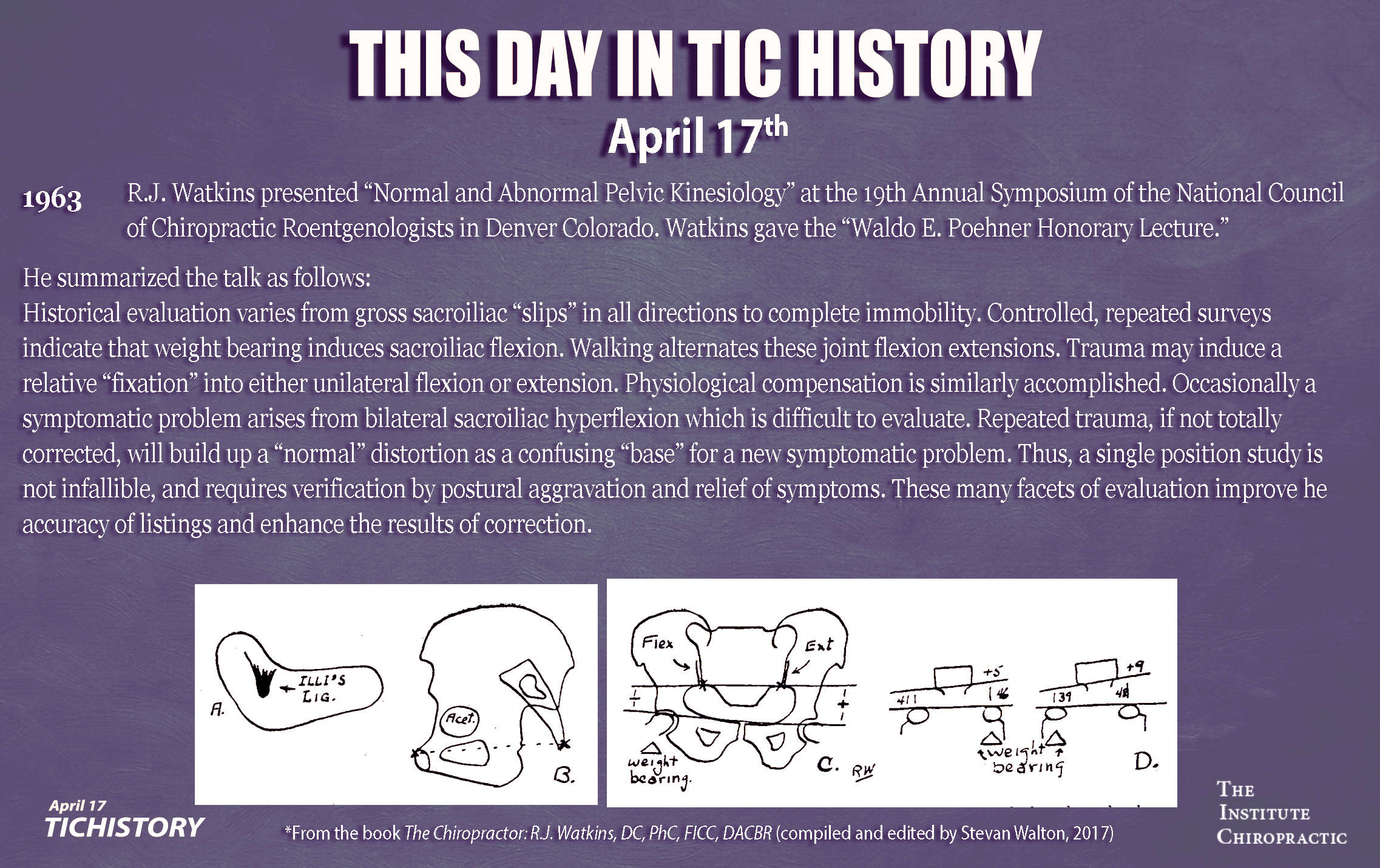 He summarized the talk as follows: Historical evaluation varies from gross sacroiliac “slips” in all directions to complete immobility. Controlled, repeated surveys indicate that weight bearing induces sacroiliac flexion. Walking alternates these joint flexion extensions. Trauma may induce a relative “fixation” into either unilateral flexion or extension. Physiological compensation is similarly accomplished. Occasionally a symptomatic problem arises from bilateral sacroiliac hyperflexion which is difficult to evaluate. Repeated trauma, if not totally corrected, will build up a “normal” distortion as a confusing “base” for a new symptomatic problem. Thus, a single position study is not infallible, and requires verification by postural aggravation and relief of symptoms. These many facets of evaluation improve he accuracy of listings and enhance the results of correction. 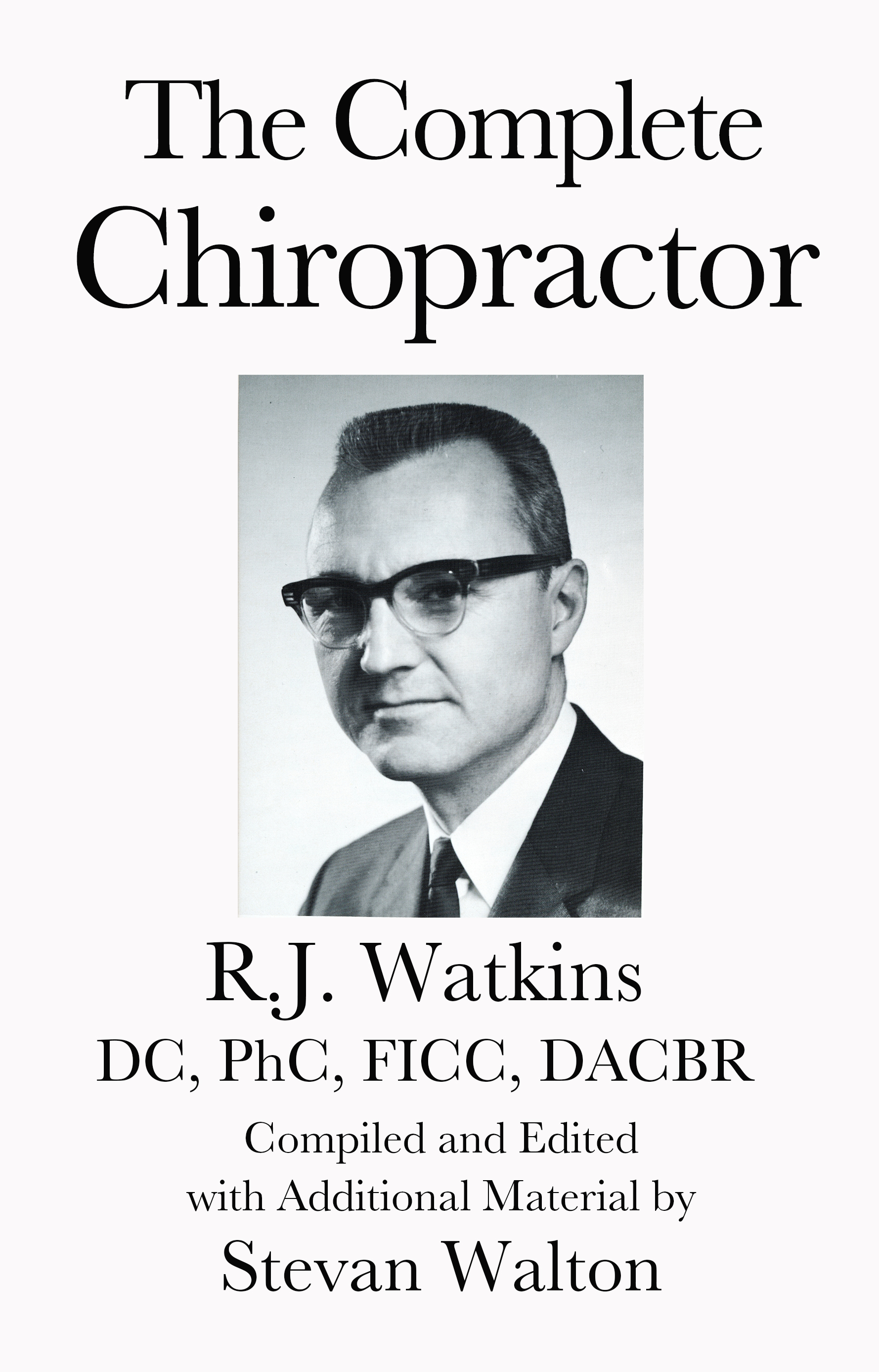 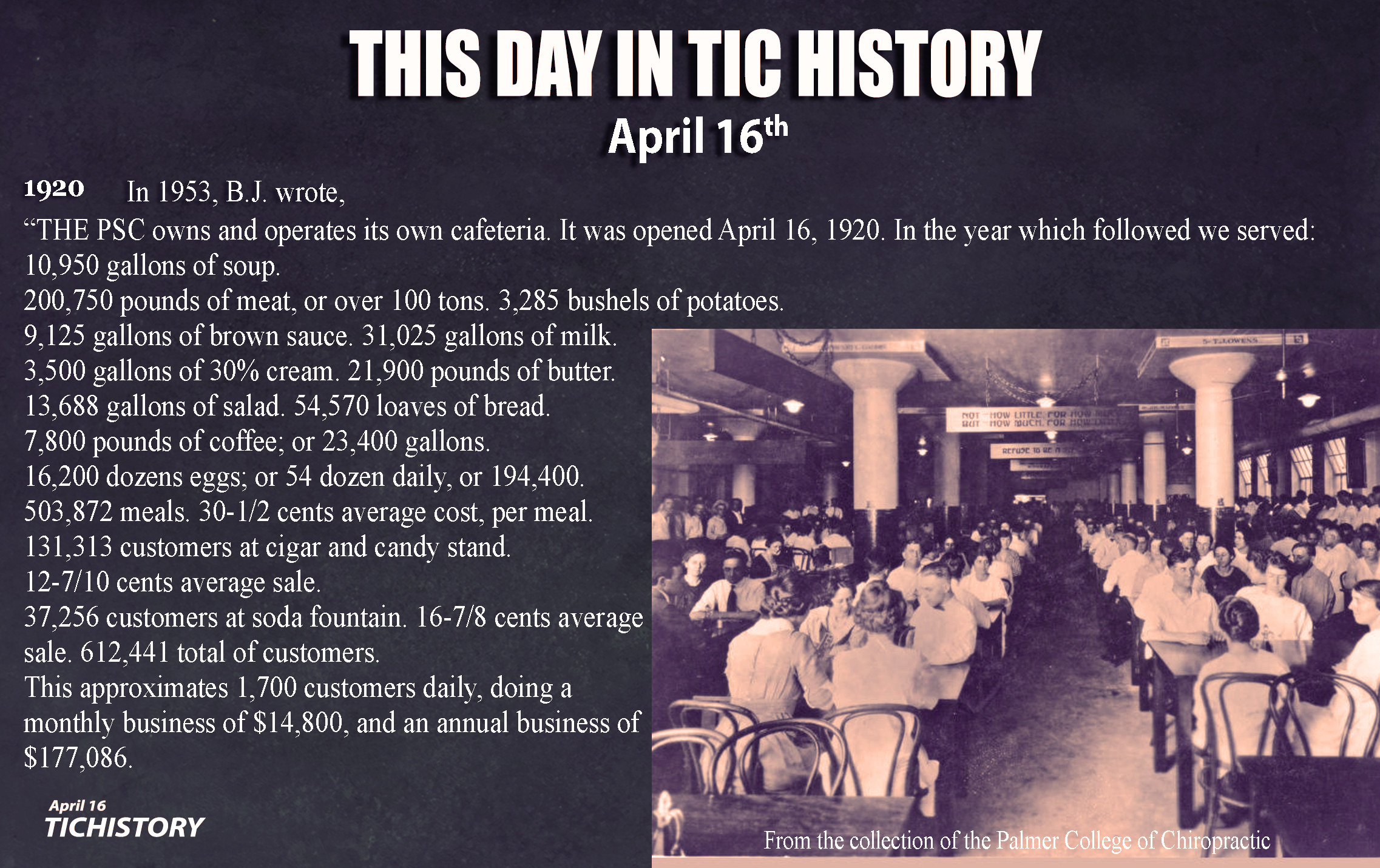 The PSC students and families have on deposit an average of $3,000,000 in the banks. They spend $5,000,000 a year while attending school.
The PSC has a full-time, full-pay faculty staff; and, in addition, five full-time teachers. Its pay-roll exceeded $175,000 in 1920, or over $3,365 per week.
We grant that there is not another professional school, of any kind, that is anywhere near as large, that has faced the odds, fought the
circumstances and done without state taxation or private endowment.
There are few, if any, professional schools WITH taxation or endowment that have reached the size that we are. What is it then that this institution has done that has taken it out of the mass and placed it in a class by itself?
My father discovered a principle. I developed that principle. No matter how great that discovery or how wonderful the development if not sold it does nobody good and might as well be back in the womb of time. 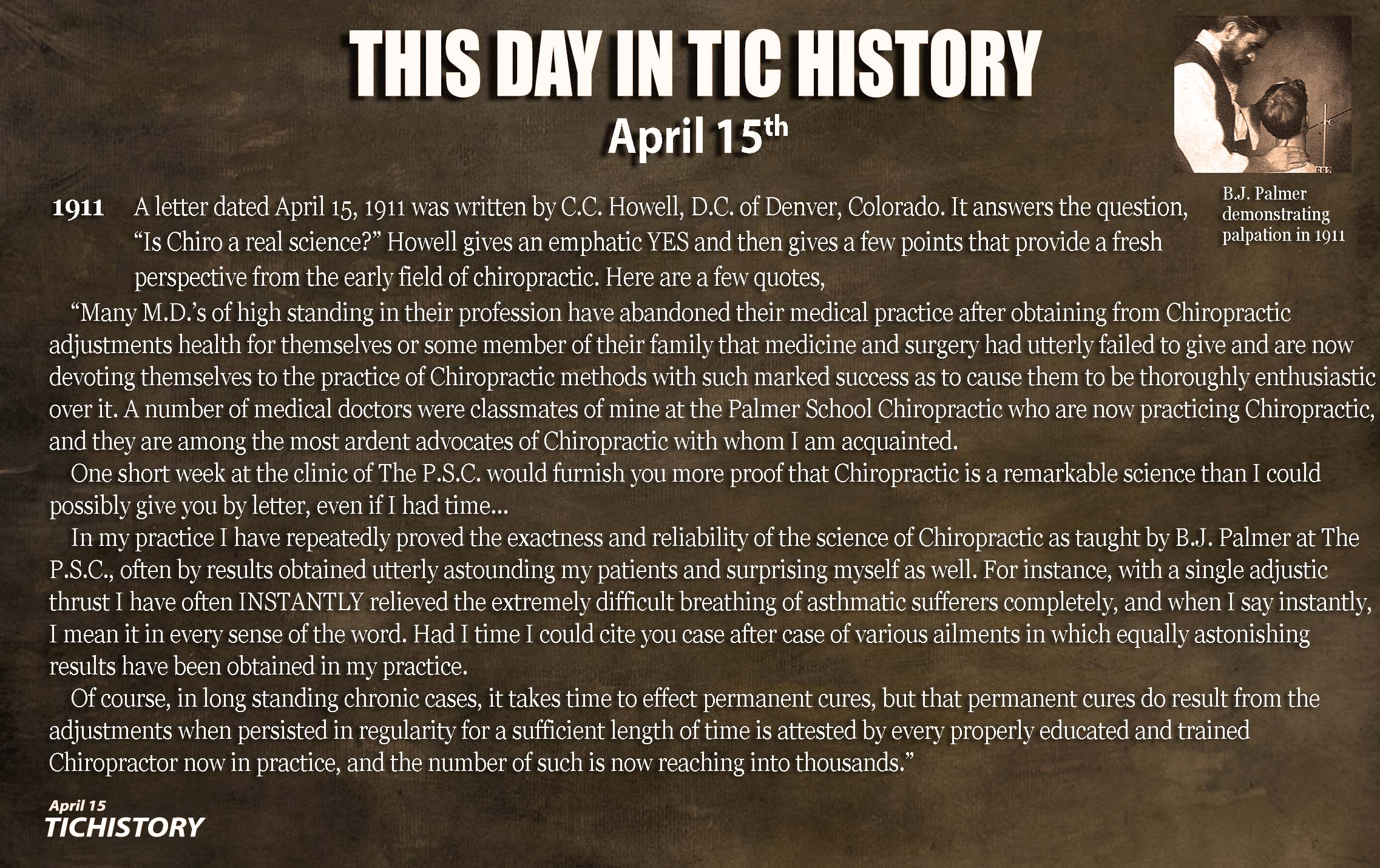 Is Chiro a Real Science?

A letter dated April 15, 1911 was written by C.C. Howell, D.C. of Denver, Colorado. It answers the question, “Is Chiro a real science?” Howell gives an emphatic YES and then gives a few points that provide a fresh perspective from the early field of chiropractic. Here are a few quotes,

“Many M.D.’s of high standing in their profession have abandoned their medical practice after obtaining from Chiropractic adjustments health for themselves or some member of their family that medicine and surgery had utterly failed to give and are now devoting themselves to the practice of Chiropractic methods with such marked success as to cause them to be thoroughly enthusiastic over it. A number of medical doctors were classmates of mine at the Palmer School Chiropractic who are now practicing Chiropractic, and they are among the most ardent advocates of Chiropractic with whom I am acquainted. One short week at the clinic of The P.S.C. would furnish you more proof that Chiropractic is a remarkable science than I could possibly give you by letter, even if I had time… In my practice I have repeatedly proved the exactness and reliability of the science of Chiropractic as taught by B.J. Palmer at The P.S.C., often by results obtained utterly astounding my patients and surprising myself as well. For instance, with a single adjustic thrust I have often INSTANTLY relieved the extremely difficult breathing of asthmatic sufferers completely, and when I say instantly, I mean it in every sense of the word. Had I time I could cite you case after case of various ailments in which equally astonishing results have been obtained in my practice. Of course, in long standing chronic cases, it takes time to effect permanent cures, but that permanent cures do result from the adjustments when persisted in regularity for a sufficient length of time is attested by every properly educated and trained Chiropractor now in practice, and the number of such is now reaching into thousands.” 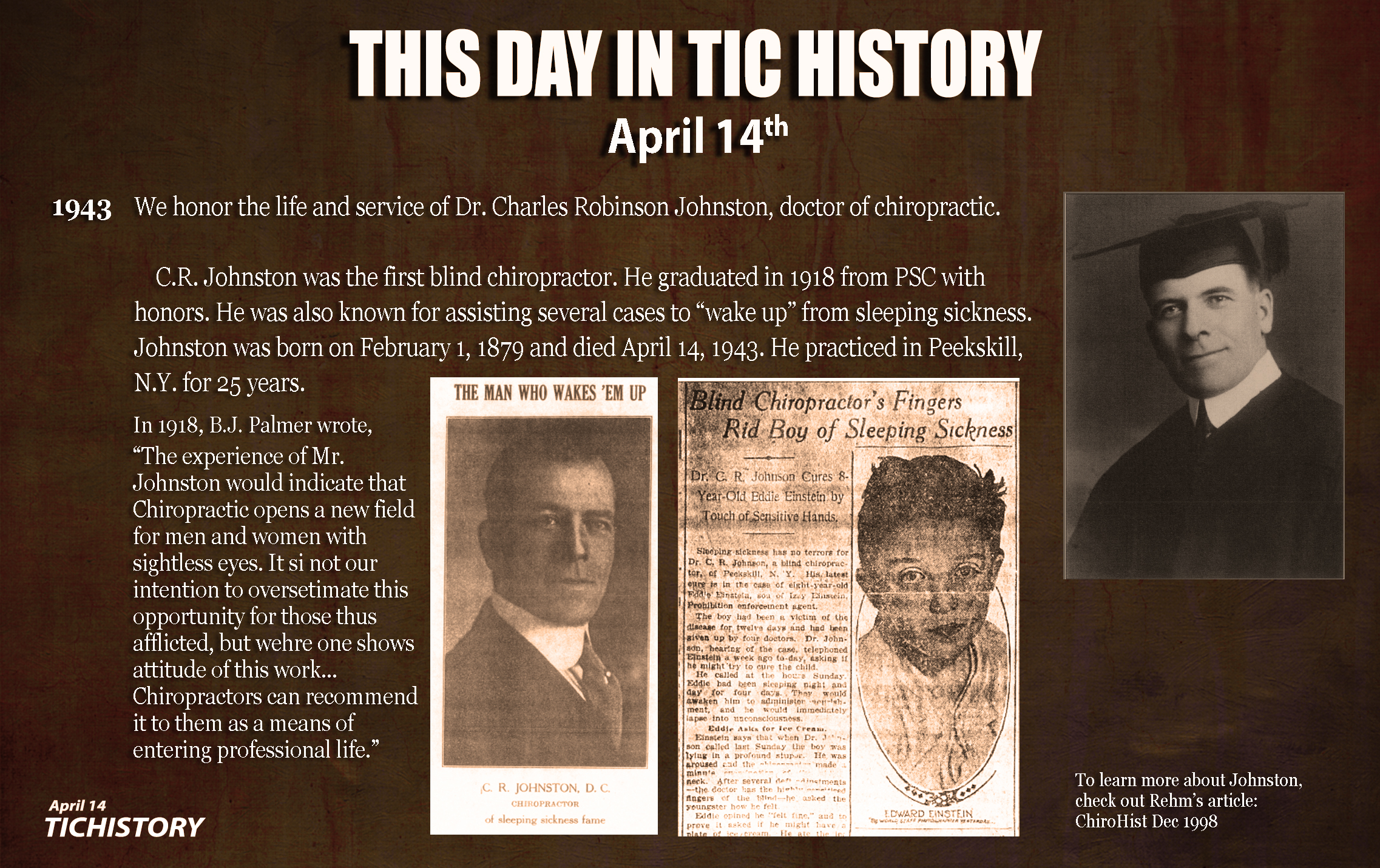 We honor the life and service of Dr. Charles Robinson Johnston, doctor of chiropractic.

C.R. Johnston was the first blind chiropractor. He graduated in 1918 from PSC with honors. He was also known for assisting several cases to “wake up” from sleeping sickness. Johnston was born on February 1, 1879 and died April 14, 1943. He practiced in Peekskill, N.Y. for 25 years.

In 1918, B.J. Palmer wrote, “The experience of Mr. Johnston would indicate that Chiropractic opens a new field for men and women with sightless eyes. It is not our intention to overestimate this opportunity for those thus afflicted, but where one shows attitude of this work… Chiropractors can recommend it to them as a means of entering professional life.” 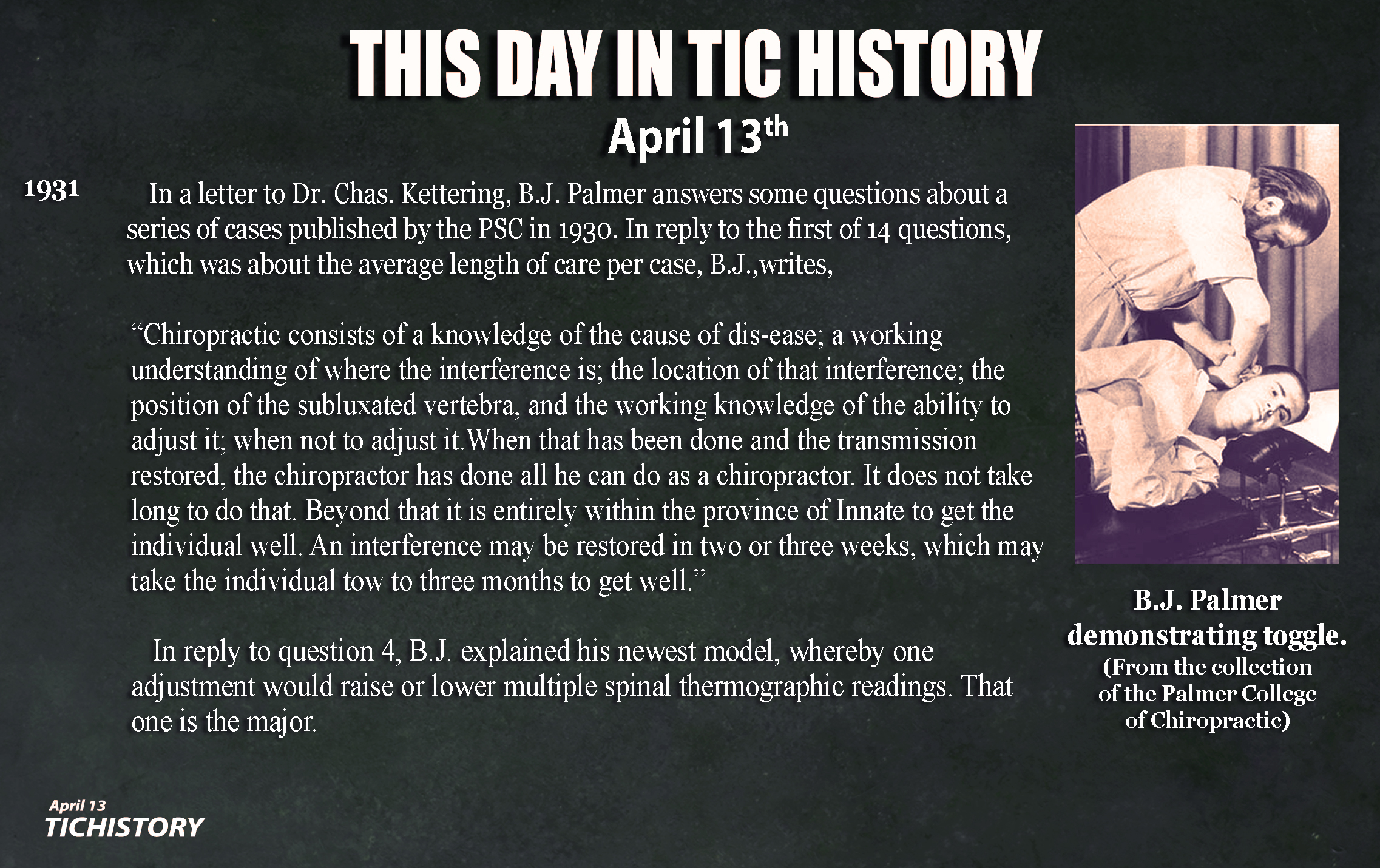 In a letter to Dr. Chas. Kettering, B.J. Palmer answers some questions about a series of cases published by the PSC in 1930. In reply to the first of 14 questions, which was about the average length of care per case, B.J.,writes,

“Chiropractic consists of a knowledge of the cause of dis-ease; a working understanding of where the interference is; the location of that interference; the position of the subluxated vertebra, and the working knowledge of the ability to adjust it; when not to adjust it.When that has been done and the transmission restored, the chiropractor has done all he can do as a chiropractor. It does not take long to do that. Beyond that it is entirely within the province of Innate to get the individual well. An interference may be restored in two or three weeks, which may take the individual tow to three months to get well.”

In reply to question 4, B.J. explained his newest model, whereby one adjustment would raise or lower multiple spinal thermographic readings. That one is the major. 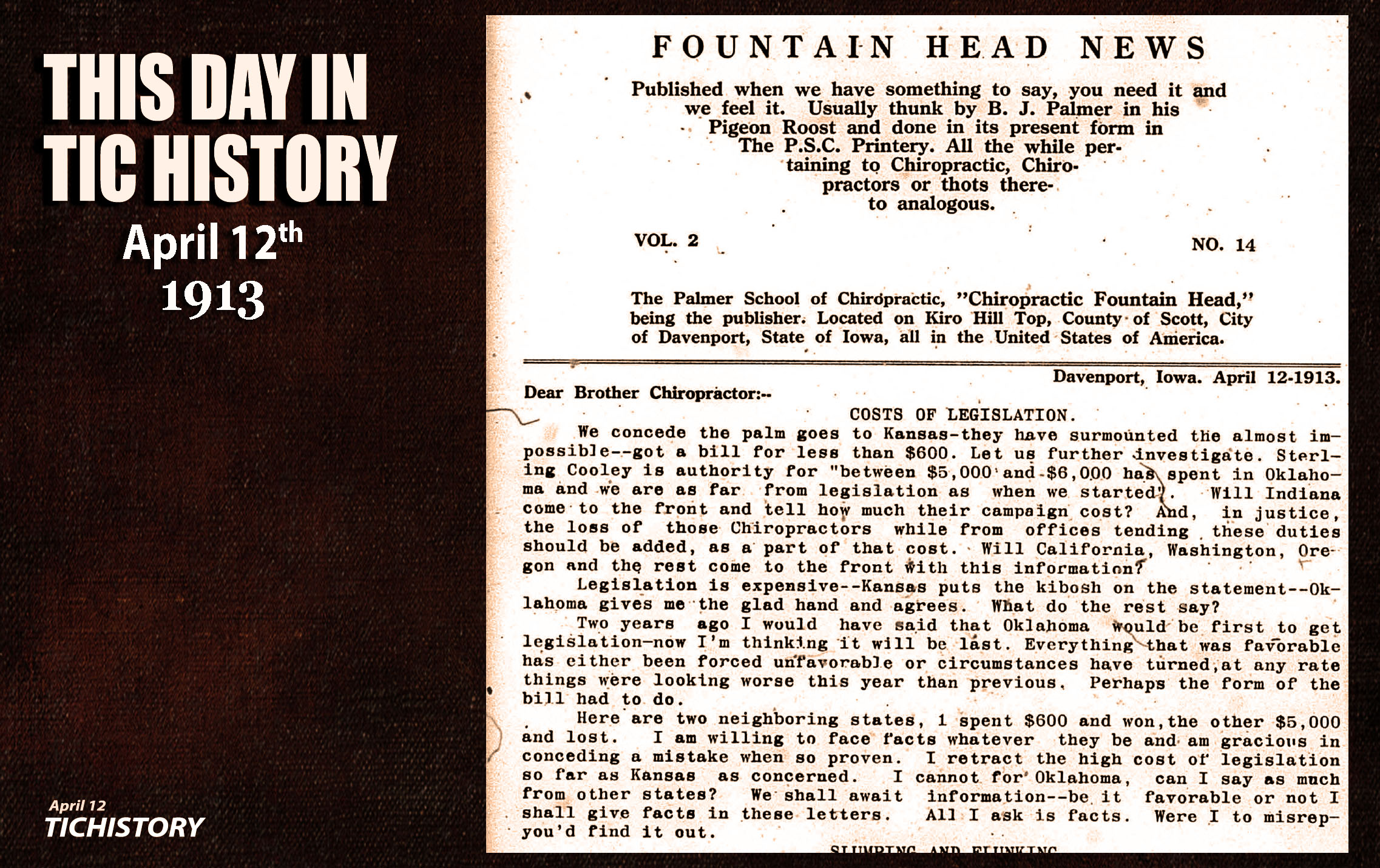