Steve Burich, DC, PhC went to Beloit College and taught public school chemistry before enrolling at the Palmer School of Chiropractic in 1912. He started teaching even before he graduated in May 1913.

According to Rolf Peter’s book, Burich was head of the Histology and Chemistry department in 1914 and by 1922, head of the Neurology department. B.J. Palmer wrote, “He is the final authority on matters pertaining to the nervous system.”

In 1919, Burich wrote, Chiropractic Chemistry (Vol. 11). It was reprinted 3 times. He was also a collaborator with Vedder, Firth, and B.J. on the 1920 Text Book on The Palmer Technique of Chiropractic (Vol. 13).

Burich resigned from the PSC in May 1926 and helped to found Lincoln Chiropractic College with Firth, Vedder, and Hendricks. He served as secretary of LCC until his death in 1945. Speculation that the big four all left because of the mandatory teaching of the NCM is not wholly accurate. Each of the four (Firth, Vedder, Hendricks, and Burich) left for different reasons.

Harry and Steve Leave Us

Harry E. Vedder, for thirteen years professor of physiology at the PSC, and Steve J. Burich, for a like time professor of chemistry and neurology, have resigned their positions, the resignations taking effect on May 15th, 1926.

Men have a right to differences of opinion and judgment, based upon their vision, but it is not to the best interest of any institution to attempt to compromise on vital principles.Conflicting instruction in proven fundamentals retards and destroys the process of constructive advancement. Progress makes way to those who will.

Conflicting instruction in proven fundamentals retards and destroys the process of constructive advancement. Progress makes way to those who will. The departure of friends always leaves its imprint upon the pages of memory. 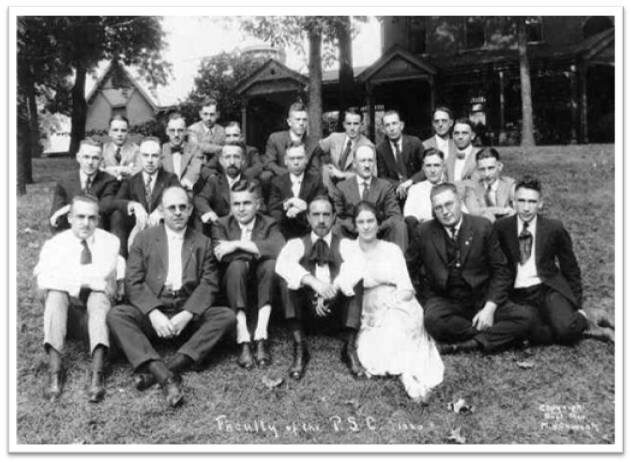 Burich describes Innate Intelligence as the great supervisor of all chemical processes, metabolism, and overall function. When the nervous system is free from subluxation, this supervision is at its peak. When the vertebrate is free of subluxation, all processes function normally and healthfully. Innate even exerts its influence on the formation of enzymes. It also controls the actions of gland secretion. Burich considers Innate even more than a supervisor and a guide. He attributes will to Innate.

Central to Burich’s application of Innate philosophy to the chemistry of life, is the idea that subluxations cause incoordination. When the subluxation is corrected, Innate can guide the proper coordination required for health. This can happen as mental impulses flow more easily over or through the nerves. In a precursor to Stephenson’s Principle 24, and the concept of the limitations of matter, Burich emphasizes that Innate can only act when the proper elements of bodily organization are in place, such as nutrition and oxygen. His overall approach places Burich at the forefront of self-organizing theories of biological processes in the 20th century.

The Supervision of Innate

“As long as no subluxations exist in the spinal column and there is no impingement upon the spinal nerves which emit through the intervertebral foramina, no incoordination exists, and the material which is taken into the body as food under these normal conditions is properly digested, absorbed and assimilated under the supervision of Innate Intelligence. In cases where no impingement obtains, just the right amount of fat, which is to be used in the metabolism of the body, is taken from the food. Under Innate’s supervision there is no deficiency or surplus of fat ever present in the human body.” (p.202)

“Glycerol is a triatomic alcohol, having the formula C3H8O3. It is colorless, odorless, syrupy liquid, neutral in reaction and sweetish in taste. It has the specific gravity of 1.266 at 15 degrees centigrade. It is a food only in limited quantities, but if present in excess, it fails to be assimilated and produces digestive disturbances. If no subluxations obtain in the body, Innate Intelligence would cause only those quantities of glycerol to be absorbed which could without any difficulty be assimilated and serve as food, thereby resulting in no ill effects.” (p.203)

“Physiological Chemistry is that branch of science which treats of the chemical compounds making up the living organisms. An enzyme is a colloid material prepared by the protoplasm of living cells under the influence of Innate Intelligence, soluble in water and weak alkaline solutions and possessing the property of producing chemical changes in organic material. (p.239)

Chemistry of the Liver

These different products brought to the tiny work shops of the liver, which are supervised and guided in their work by Innate Intelligence, are transformed, as Innate wills. Some of the products are utilized in the formation of bile, others in the production of glycogen, still others are disintegrated, forming urea, and some are made to be used in metabolistic processes in different parts of the human body.” (p.259)

The parathyroid glands, usually four in number, are situated two above and two below the thyroid. They consist of masses of cells permeated by a great many blood vessels. The exact chemical consistency of their secretion has not, as yet, been determined. It is a known fact, however, that their extirpation or removal is followed by muscular convulsions or tetany. This condition is followed by other and very serious symptoms and death usually results from the inability of the glands to functionate and produce their secretion. Such conditions as infantile tetany and gastro-intestinal tetany, as well as others, in which there is the inability of the muscles to produce coordinated movements, are said to be the result of insufficient active parathyroid secretion.

As long as no subluxation exists in the spine and Innate Intelligence is not hindered in furnishing these glands with the proper amount of mental impulses, the glands perform their function properly and no incoordination obtains.” (p. 286)

“The absence of this secretion or the removal of the glands is followed by great prostration and muscular weakness, resembling the symptoms occurring in Addison’s disease. These glands are supplied by nerve fibers emitting from the spinal cord in the region of the tenth dorsal vertebra and as long as no subluxation in this region obtains, Innate controls the action of the secreting cells and the secretion is carried on and supplied in proper quality and quantity to the various muscle fibers of the entire body.”
(p. 288)

“…we might conclude that the exchange of gases in the lungs would take place because of the existing difference in the tension of the air and yet, it is absolutely necessary to consider herein the vital factor which makes the degrees of tension and hence the exchange of gases possible. Innate Intelligence controls all of these vital processes and without it even the chemical laws governing the exchange of gases would not obtain.” (p.302)

In the study of poisons there necessarily arise two apparently conflicting phases. The first is that toxins continually administered to the human metabolism give rise to disease and second that subluxations causing nerve impingement are the primary cause of all disease. This apparent  contradiction however can be readily explained.

All diseases of the body are caused by nerve impingements which cut off the supply of mental impulses, but it must be remembered that if the proper substances are not supplied for Innate to act upon, then the coordinated action of the tissue is impossible. For instance, if the act of respiration is discontinued, for a material length of time, the blood becomes laden with carbon dioxide instead of oxygen and the cells are not capable of utilizing the impulses which may be freely supplied.

On the other hand, if a poison is introduced which has a destructive influence upon the tissues, with which it comes in contact, then it acts to the individual cell, the same as any traumatic condition acts to the body as a whole. We could not assume that if the finger were continually being crushed by heavy external objects, that reparation could take place rapidly enough to ultimately produce a state of normality. On the other hand, if poisons are continually being introduced they act by destroying and tearing down the individual cells with which they come in contact and thus have the same effect here as traumatic agents have on the external surface of the body.

In no way does this conflict with the basis upon which Chiropractic is founded because our science concedes that certain nutritive elements are essential, that a certain quantity of oxygen is necessary and that other necessary substances must be taken into the body before Innate can properly act upon the cells; that all of these things are essential and that the action of each one is interdependent upon the action of every other one.

It is our endeavor in this subject, especially in dealing with the antidotes for the various poisons, to point out the most advisable methods for neutralizing the effects of these internal traumatic agents in shorter time than it would be possible for Innate to repair the damage done.” (p. 351-2)