Shegataro Morikubo was born in 1871 in Tokyo, Japan. He came from an aristocratic family. He moved to the United States in 1889 and converted to Christianity. He was schooled in a Buddhist monastary as a child and later completed a degree in philosophy. His early years in America included several lectures on and published articles on Japanese culture.

After trying osteopathy to help with an injury from practicing martial arts, Morikubo corresponded with D.D. Palmer about studying chiropractic in 1906. While D.D. Palmer was jailed for practicing medicine without a license, during the spring of 1906, Morikubo published an article in the local paper titled “Are American People Free?” He protested the system that incarcerated his teacher. 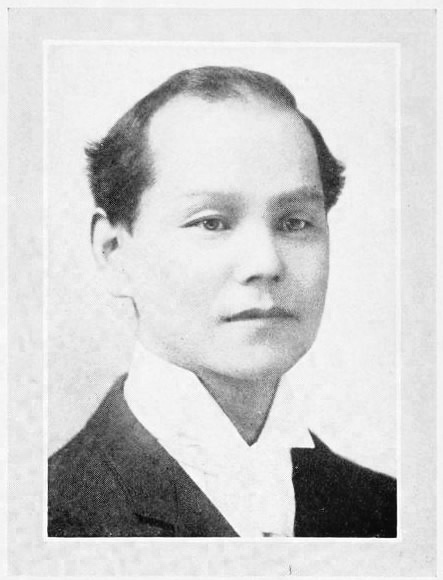 Morikubo continued to study under B.J. Palmer after D.D. left Davenport. In the fall of 1906, Morikubo even taught some of B.J. Palmer’s philosophy courses while B.J. was traveling.

Upon Morikubo’s graduation, he and B.J. plotted to test the Wisconsin legal system. Shegataro opened his office in LaCrosse, Wisconsin in the same building as the osteopath who brought charges against two chiropractors in 1905. On January 24, Morikubo wrote to B.J. to from LaCrosse, “A Chiropractor must have a large heart and vision worthy of this great science he represents… Should (MDs or DOs) molest us … (a) coward would lose the victory before the battle begins.”

After the August trial, Morikubo maintained that he and B.J. planned the defense for six months. Morikubo’s writings from January 1907 attest to that. He explained chiropractic is a distinct science, art, and philosophy. 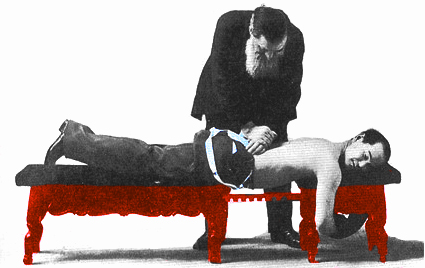 Morikubo confronted the issues head on by taking out a full page ad in the local newspaper. The ad was in the form of a lengthy article on the philosophy of chiropractic.

It has a rather unattractive name, Chiro-practic, and is not least melodious to those who know nothing about it. Yet, a careful investigation and examination of its theory and practice would astound even a great intellect, with a revelation of profound depth and colossal proportion. No other science can grapple with a problem of three-fold aspect: philosophical, scientific and artistic. For its completeness and comprehensiveness, Chiropractic may be called philosophic science. let us see the reason whereby this science pales all other sciences into insignificance. We must review briefly, in order to appreciate its greatness, the structure and functions of the living human body.

Amid manifold wonders with which we come daily in contact, the most marvelous and beautiful piece of divine handiwork, is the human body. Its billions of cells, each being microcosm perform their functions harmoniously to maintain a perfect health. The bones, the arteries, the veins, the lymphatic glands, the thoracic and abdominal organs, lung, liver, heart, stomach, and all other organs of the body work in perfect harmony, when not interrupted, to maintain life, health, and beauty in man.

When the bony structure and all organs are in order and work harmoniously, the individual is healthy. When, however, there exists any disorder or any disturbance in the body, the result is disease and death.

These phenomena, health and disease, have baffled philosophers of all ages. The problem has never been solved. To say it NATURAL to be healthy, expresses nothing; to say it is UNNATURAL to be sick, is begging the question. medicine, ever since the days of Hypocrites, the physician, has been endeavoring to discover the cause of disease, but all in vain. It has been universally believed both by physicians and laymen however, that disease is due to some chemical change in one way or in the other, in the animal economy. But what produces a disorganization and its subsequent chemical change in the constitution, has never been told… The wisest of physicians during the last thirty

The wisest of physicians during the last thirty centuries, have not told one thing that sounds logical with regard to the cause of human disease. Is their failure in discovering the cause of disease in man due to their negligence in the study of man as a unity? Has their materialistic view of life so far deceived them that man is not a trine? – physical, mental and spiritual. Such seems to have been the case when we consider the fact that physicians have used only one method in an attempt to relieve human suffering. That method has been to do altogether with the functions of the body. It is comparatively of recent date when they began to pay some attention to psychological phenomena in disease, but they know nothing of how the mind affects the body. Without this important knowledge, medical science, so-called, will never reach that stage of development called science.

The task of solving this problem has fallen into the hands of Chiropractic. IT HAS SOLVED THE PROBLEM. The Chiropractor has discovered, through careful study and experiment and reasoning, that the mind controls absolutely all organic functions in the animal economy. the medium through which the mind expresses itself, is the brain and the nerve center. The nerves transmit the brain energy generated within the brain cells to every tissue in the body, carrying with it power, and intelligence which prompts the cells to life on and to function in harmony with every tissue in the body.

The mental organism, according to Chiropractic, is dual, the Innate and the Educated. The Innate is inborn. It is that spiritual being endowed with the knowledge of the physical and mental laws and possesses, to a limited extent, a creative power. The Innate at birth is intelligent as it is after fifty years of experience with life. The Innate has power to control, even at birth, all of the functions of the organs, digestion, assimilation, respiration, and all other necessary functions of the living body. The Innate is immortal. The Educated mind, on the other hand, is that which is acquired after birth and perishable at death. Let us study the function of the Innate in its relation to the body.

Chiropractic, through careful reasoning and experience, has reached the conclusion that every individual cell which composes the organs, is connected to the Innate brain by a nerve fiber and it is under a direct control of the Innate mind. The so-called sympathetic nerve system, according to the old school of medicine, is the nerves which connect the body with the Innate brain. The functions of the Innate brain is popularly called “involuntary” and is understood as a function performed independent of the will and sometimes in spite of it. When such a function is performed, it is called “reflex,” indicating absolutely nothing intelligible. The Innate is perfectly conscious of what it is doing no matter whether or not we are aware of it. Observe how Innate governs and directs the organic functions in case of emergency. Observe a drunken man. His respiration is quicker and his heart beats faster. Why? The Innate recognizes at once the presence of foreign matter in the body, over which he presides. He at once gives a command to the brain to send a larger quantity of its energy to the lungs and the heart, which immediately increase their activity in order to get rid of the foreign matter. The heart begins to pump harder and faster so as to replace waste matter and the lung breathes deeper and faster than usual in order that it may absorb larger quantity of oxygen to burn the alcohol. The kidney and liver, too, become more active to eliminate the waste matter.

The functions performed by the Educated mind are comparatively few. It controls a few muscular movements, reasons inductively, and gathers data for the Innate mind. The educated mind has no part either in health or disease, and it is subservient to the Innate. In fact, the educated mind is the medium through which the Innate comes in contact with the physical universe. Under certain conditions, the Innate sees and hears without the organs of sight and hearing. Thus, the Innate manifests its power, demonstrating that it can perform functions independent of the laws that govern the physical universe.

In health the Innate communicates with the Innate brain, which sends energy (called by the Chiropractor “brain impulse”) through the Innate nerve fibers, which reaches every individual cell in the body, carrying it a power to act and an order how to act. The countless millions of cells, which at least possess intelligence to interpret the order and to respond to it, utilize the power sent out from the brain, and act in harmony with all other cells. When the brain impulse is interrupted, however, it becomes abnormal, in one way or another, and the cells are either partially paralyzed for the lack of power, or they become abnormally active, due to excessive power. In either case, the cells cannot work harmoniously with other cells, composing organs. The result is Disease.

The landmark Morikubo case set the first precedent for chiropractic philosophy. The judge ruled that chiropractic was separate and distinct. It had a distinct philosophy, science, and art.

Historians have incorrectly reported that the defense used Smith and Langworthy’s text Modernized Chiropractic. While there is one newspaper account, which states that Morikubo supplied all known chiropractic texts for the prosecution, there is no evidence the defense used the book. An examination of Morikubo’s

Furthermore, an examination of Morikubo’s philospohical writings months before the trial (see above) demonstrates that he integrated the ideas of D.D. Palmer and B.J. Palmer. There is no evidence that Smith’s theories were included in his explanation of chiropractic.

This is an important point because for some reason, historians fell in love with the conjecture put forward by Lerner in 1952, that Langworthy saved the day and that the profession rests on his ideas. The facts do not support that conjecture and history books should be revised.

Morikubo contributed to the philosophy of chiropractic again in 1915 a fascinating article on chiropractic’s philosophical completeness. He included several original diagrams to explain his thesis. 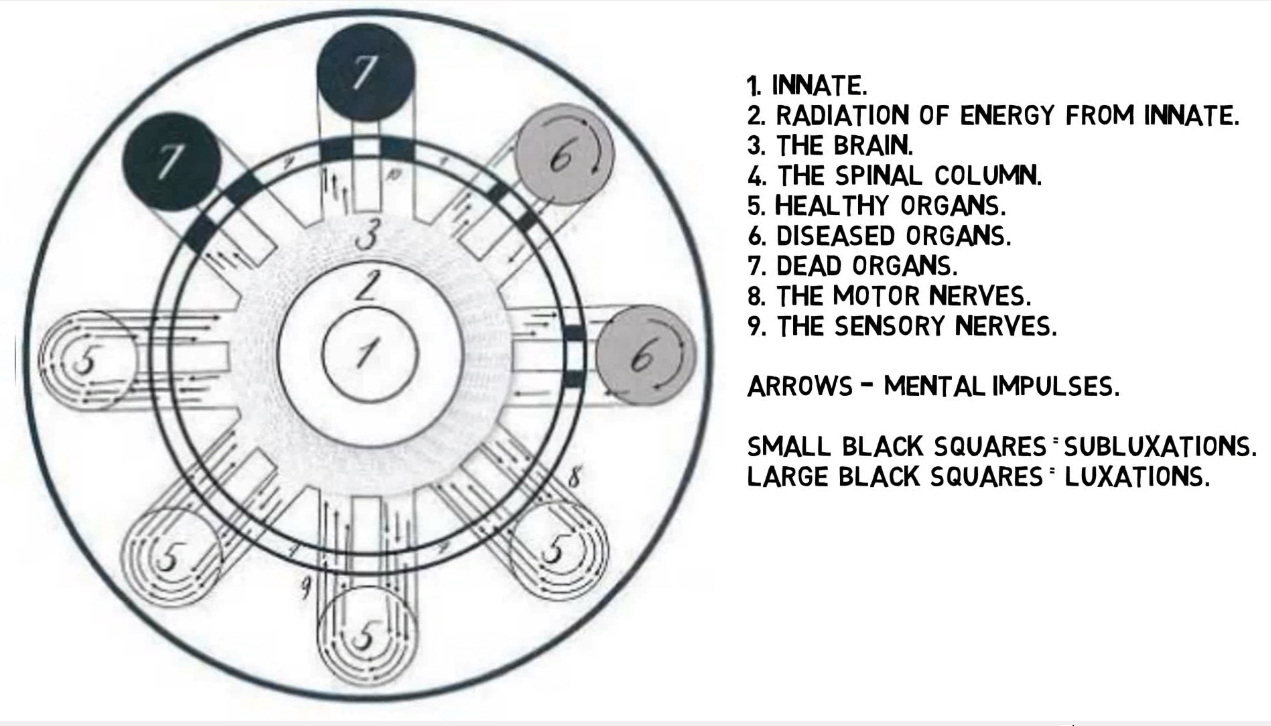