He started as a patient when he was in high school. D.D. Palmer treated him 5 or 6 times per week for six months. Smith kept an account of his health progress in his journal. He also wrote down many of the events that happened between him and the Palmers in those early years.

After becoming D.D.’s student, Smith gradually became his protégé. He covered D.D. Palmer’s practice and school when the Palmers went traveling. He also became friends with B.J. Palmer, who was two years younger than himself.

In Timothy J. Faulkner’s new book on Smith, he concluded that Smith was D.D. Palmer’s protégé because he studied with the founder of chiropractic for a longer period than any other early student. He even wrote in a letter to Smith in 1902, that he consider BJ and Oakley his successors.

After graduating from D.D. Palmer’s program, Smith went back to Davenport to continue his studies. When he opened his practice in early 1902, he used the term “sub-luxation” in an advertisement. According to Faulkner, this is the first known chiropractic publication using the term.

When D.D. Palmer moved to California in 1902 and planned to open a school, he asked Oakley to move there. Oakley left his new chiropractic office in Clarinda, Iowa and followed his mentor to Santa Barbara. While there, the two joined with Minora Paxson, a graduate of the Palmer Chiropractic College Santa Barbara, and planned out the curriculum.

The California sojourn did not last long due to D.D. Palmer’s legal troubles (practicing medicine without a license). So, the three moved to Chicago to open a school there. The Chicago school never got off the ground.


Smith and Paxson then joined with D.D. Palmer’s rival, Sol Langworthy. They helped Langworthy to reinvigorate his American School and Cure in Cedar Rapids. D.D. Palmer went back to Davenport and the first real divisions in the chiropractic school wars began. 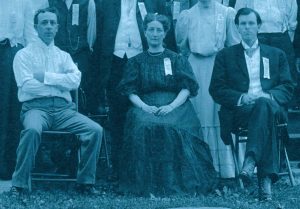 From The Chiropractor's Protégé

The falling out between Smith and Palmer is detailed in Faulkner’s book although the true reasons of Smith’s turn against his teacher may remain a mystery.

Smith stayed with Langworthy’s school for a couple of years. He taught classes, conducted subluxation research, and published his book.

Smith started researching the vertebral subluxation in the late 1890s. He took college classes on anatomy and physiology with an emphasis on dissection. By 1905, he was doing microscopic studies of the ligamentous tissues of the intervertebral foramen and the intervertebral disc. He found that ligamentous scarring pulled on nerves and blood vessels. Thus he developed a synonym for the vertebral subluxation: ligatight.

Smith wrote up his findings in a two volume textbook, which was edited by Paxson and published by Langworthy. The title of the book was Modernized Chiropractic. It was published in 1906 and used the term “subluxation” over 1,100 times.

Smith continued his subluxation research as he launched his new profession, Naprapathy. Faulkner’s book describes these developments in detail with rare photos of D.D. Palmer, letters, as well as some early publications.

Chiropractic is founded with due regard for the known facts  in  Anatomy,  Physiology,  and Pathology.

The Keynote of Chiropractic

The keynote, which rings all through Chiropractic principles and practice is the Chiropractic Thrust which produces localized Spontaneity so essential to retain the in the position in which it was placed by the same identical Thrust. Thrust, then, is the Gibraltar upon which Chiropractic adjustment is founded.

The Replacement of Structure

The replacement of structure by means of this Thrust implies:

The replacement of displaced structures is by no means a new idea. Its exact age we do not know and at this time we cannot predict, but facts at hand conclusively prove that the principles underlying this system were recognized and its characteristic unique movements used more than sixty years ago in Bohemia. While it may have been practiced a much longer time, sixty years is sufficient to place Chiropractic as the first of all systems now in the field to practice skeletal adjustment. From this it will be noted that we not only claim that the philosophy which underlies the Chiropractic adjustment of subluxations is distinct and different from that known or practiced by any other system, but we further claim for Chiropractic PRIORITY in the FIELD OF SKELETAL ADJUSTMENT. Demonstration is rapidly proving that replacement of structure, scientifically applied is the most powerful of all remedial agencies. Upon this principle is being builded a system which by its merits is commanding profound attention in all parts of the world.

Man is A Machine: An Old Idea

The “outer machine” as we designate it is the mechanical part of the individual and was so looked upon in Europe nearly a century ago.

In the following pages we divide man into an outer machine and an inner machine. The former -the outer machine- is of a truly mechanical nature, while the latter is more of a vital nature.

We do not claim that this is a new  idea with us nor in fact is it an idea new in recent years. On the contrary, man has been regarded as a mechanical structure for nearly a century that we know of.

From a practical standpoint the Bohemians regarded man as a machine as is shown by the fact that they employed mechanical correction for ills of the human body. Actions always speak louder than words, but aside from this there are words on the subject.

In an old French work “Maygrier’s Anatomists Manual” we find a statement that leaves no room for doubt that the idea that the part that we have designated as the outer machine was looked upon a great many years ago as being only mechanical in nature. On page four, Vol. II of this old work we note the statement that the “skeletology and myology form as it were only the mechanical part of the individual”. In another place in the same work, page three Vol. I it shows what skeletology comprised at this early day.

We quote Skeletology comprehends the history of the bones, cartilages, ligaments, periosteum, and pretended synovial glands.”

This work from which we have taken these extracts was translated into English as early as 1832.

Regarding man as a machine we find the structures belong to two divisions:-The outer machine.

The skeletal muscles with their tendons and the sesamoid bones developed in them including the patellae. The hyoid should also be here included as it is tendinous in action.

The other main class consists of structures which, taken collectively, we term the inner machine.