James N. Firth, DC, PhC was a 1910 graduate of the Palmer School of Chiropractic. Firth was born on September 16, 1886 in Sterling Michigan. Before enrolling at the PSC, Firth taught public school for a year and was principle of the public schools in Sagining, Michigan from 1907 to 1909.

Firth started teaching at PSC in 1911. Peters’ writes, “During 1912, he was not only in charge of the Department of Symptomatology, which included Pathology, but also taught palpation and nerve tracing to the junior class and assisted in teh afternoon clinic.

Firth was the first faculty member to publish a book besides the Palmers. His Chiropractic Symptomatology became known as Vol. 7 in the series of Green Books. B.J. Palmer authored Vols. 2 through 5. Firth’s book was the first application of B.J. Palmer’s new theories to diagnosis. In fact, Firth completely integrated D.D. Palmer’s chiropractic paradigm into the book as well. The book went into two editions and was renamed Chiropractic Diagnosis in 1928 and was updated in 1948.

Firth taught the Pit Class with B.J. Palmer for many years. He also collaborated with B.J., Vedder, and Burich on Vol. 13, The Text Book on The Palmer Technique.

In 1940, Firth was the second president of Lincoln. Many of his students like Gonstead, Muller, and R.J. Watkins went on to lead the profession.

A copy of Firth’s technique manual from the 1940s is houses in the archives of The Institute Chiropractic. One of the TIC Member features is access to an extensive archive of audio, video, and textual rarities. Firth’s manual was owned by R.J. Watkins and it includes R.J.’s notes. It demonstrates that Firth taught all known techniques without naming any of them according to technique developer. Watkins carried this tradition to Canadian Memorial Chiropractic College in their 1948 technique manual (also housed in the archives and reproduced in The Complete Chiropractor). 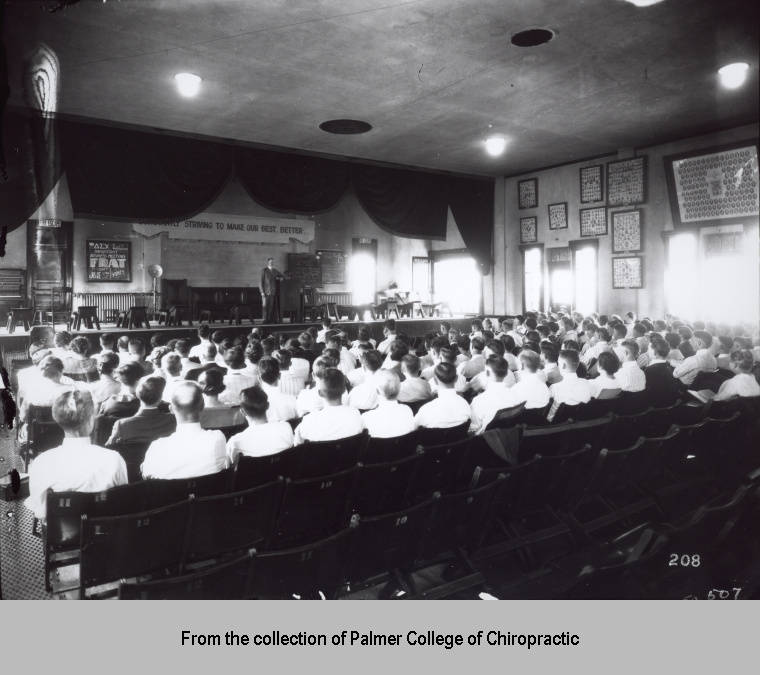 Firth’s book describes Innate Intelligence in terms of actuating every day action. It is force, mind, instinct, and intuition all wrapped up in one. The mental force of Innate relates directly to bodily development and growth.

The process of adjustment is described as gradual. The subluxation shorts the flow of mental impulses. Disease processes are compared to a locomotive moving full speed ahead. Some cases respond instantly. Others take time to overcome the momentum of the organismic process of degeneration. This must be overcome and then the metabolic processes can take over again guided by Innate.

Some cases even experience “retracing,” where symptoms seem to get worse temporarily. This is a change in the character of the symptom because the pressure was taken off of the nerve. Each case is individual and so is the improvement.

Most of Firth’s book is dedicated to descriptions of symptoms. In a few instances, he describes the body’s Innate response in terms the conscious will of an Intelligence. The book itself is based on D.D. Palmer’s chiropractic paradigm, B.J. Palmer’s theories from 1907 to 1911, and a 1920s understanding of physiology and symptoms.

Function of the Nervous System

“The next question that arises is, what is the use or function of all these nerves, spinal cord and brain? The answer of which we all know in a more or less vague way. But before answering this question let us look at man in a different way.

A real live man does not consist only of matter—that is, bone, flesh and blood. There is something more that makes this man alive, that actuates his every action, that causes his heart to beat, his lungs to breathe, his stomach to digest, his bowels to function, his kidneys to excrete, his glands to secrete, etc.; this something is called force, mind, instinct, intuition or Innate Intelligence. It is something not tangible, something that you cannot see, taste, hear, smell or feel; nevertheless, we must all admit its presence or existence—the existence of mind (Innate Intelligence).

The seat of the mind is the brain, and it is there that all impulses are generated. The impulses are transmitted over the spinal cord and nerves to all parts of the body, where they are expressed as life. Therefore the mental impulses are essential to life.

The mind is of different kinds, or is considered in different ways. There are mental faculties over which we have control educationally, and in a general way may be spoken of as the educated mind; but in my estimation it is only the expression of the Innate mind in certain portions of the brain which gives rise to the mental faculties, such as perception, memory, reasoning, etc.

There is also what you may call brain force, mental force or instinct, but throughout the following pages we will speak of it as Innate or Innate Intelligence, and it is this force that has to do with the development and growth of the body.” (p.9)

“This is again laid to the subluxation basis, that pressure upon nerves prevents the normal flow of impulses to the part, therefore prevents the normal conversion of food into cells, byproducts being given off, which, when becoming oxidized give off abnormal heat. Therefore it does not require more than 100 per cent of caloric impulses to cause fever, for, in fact, according to this theory the calorific nerves themselves might be impinged. Excess function is simply a manifestation of abnormal chemical action within the body, such chemical action being directly controlled by Innate Intelligence when permitted to do so, or when there is no impingement upon the nerves which would hinder this control.

Proper adjustment relieves the pressure on the nerve, permitting the normal transmission of mental impulses, which produces normal metabolism and normal chemical action as a result.

During the process of adjustment, however, the pressure is removed, but gradually. This would change the character of metabolism each day or each time the pressure was altered, which in turn would alter the character of the symptoms. Many would expect that as the pressure is reduced the symptoms will ameliorate and disappear, but, as a matter of fact, they only change in character. Oftentimes a most severe pain will occur when there is but very slight pressure, or a temporary paralysis may exist when there is but very slight pressure; thus, as the subluxation is adjusted the condition, which it has caused may be so changed as to give rise to more painful symptoms, which, of course, are only temporary. This change in the character of the symptoms, due to a change in the pressure on the nerve, is called “retracing.”

Then, again, many patients take adjustments a long time before observing any results, and wonder why it is that others get immediate relief while their personal case responds so slowly. This is a question that confronts every Chiropractor, and the answer depends largely upon a personal knowledge of the case. But in the great majority of cases the momentum of disease should be given thought, as therein is contained an ample explanation, even though the case be of short duration. After a disease has started and acquired a certain momentum it cannot be stopped immediately, any more than a railroad locomotive will immediately stop when the throttle is closed. In the case of the locomotive, the momentum which it has acquired in its run must first be overcome, then it can be brought to a stop. In the engine of disease the same is true; it may require many adjustments in some cases to overcome this momentum before the progress of destruction can be checked, after which the metabolistic process will become constructive and the patient will notice improvement.” (p. 19)

Vomiting is an Adaptive Symptom

Vomiting is the sudden expulsion of the contents of the stomach and is usually preceded by nausea. Vomiting is an adaptative symptom, and occurs when any substance or substances are in the stomach which it is incapable of digesting, or which, if digested, will be injurious to the human economy. For example, when a poison is taken into the stomach impressions are at once taken up by the afferent nerve and carried to the brain, where they are interpreted, and when Innate obtains such an interpretation she at once sends out motor impulses over the efferent nerve to the stomach, directing the act of vomiting, before the poison can be absorbed and do injury to the body. In vomiting there is a deep inspiration, the glottis closes, the cardiac end of the stomach opens by a contraction of the longitudinal fibres and the forcible expiratory contraction of the abdominal muscles follows, which causes the stomach to be emptied.” (p. 46)

“This is sometimes called muscular rheumatism of the sternomastoid muscle. As a rule the facial muscles are not affected by the contraction, but occasionally there may be facial asymmetry. The adjustment releases the pressure upon the motor nerve and permits normal flow of innate motor impulses which restore normal tonicity to the contractured muscle.” (p. 300) 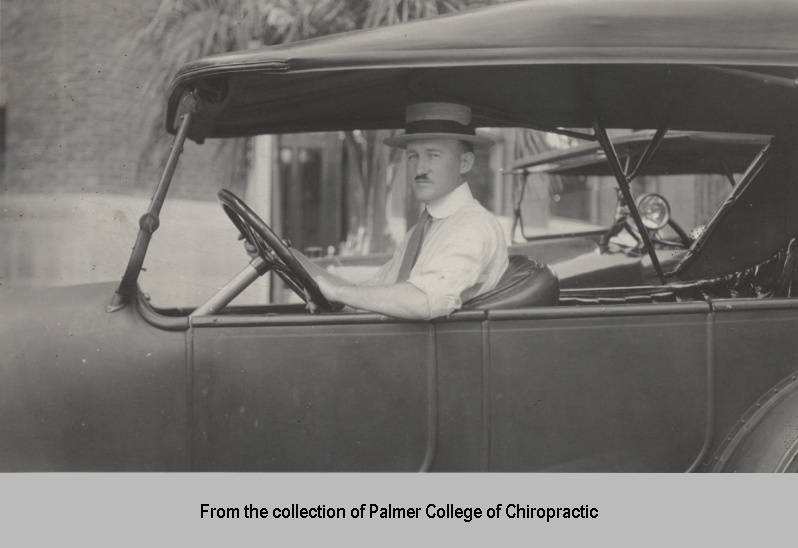