On his 61st birthday, on March 6, 1906, D.D. Palmer gifted Shegetaro Morikubo with chiropractic. He presented Morikubo with a bound edition of The Chiropractor’s first year of issues. As noted in our book, Palmer Chiropractic Green Books: The Definitive Guide, this included the only KNOWN inscribed book from the founder of chiropractic. But what D.D. truly gifted to Mori was the philosophy and practice of chiropractic. 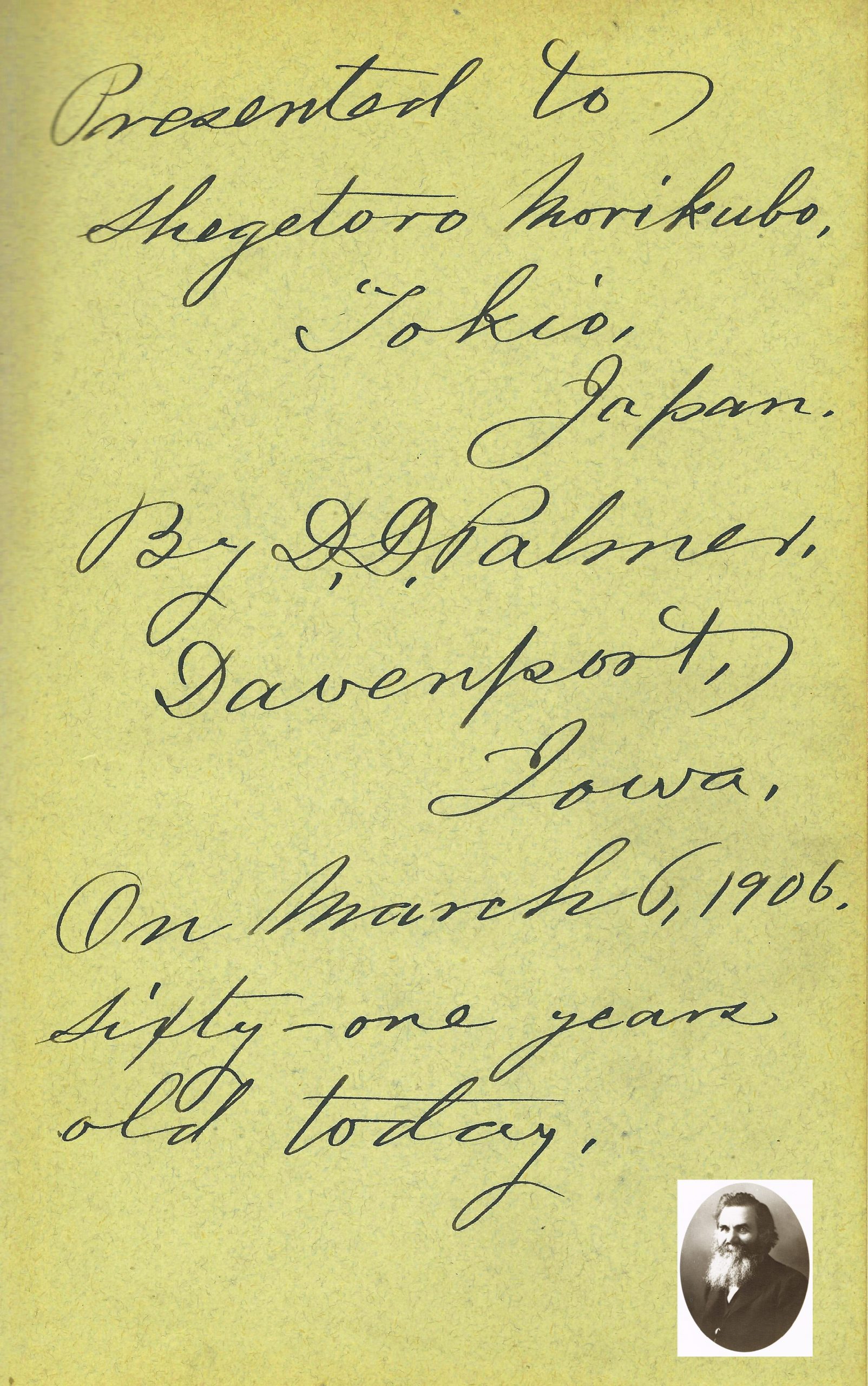 Morikubo was one of D.D. Palmer’s last students who was taught at Davenport while he was head of the Palmer School of Chiropractic. This type of rare distinction was shared with a few of the early luminaries. For example:

O.G. Smith was one of the first ten students. According to Faulkner’s excellent book, Smith was with D.D. for about six years in Davenport, Santa Barbara, and Chicago. A.P. Davis was one of the first students but he also spent time with D.D. years later in Portland, Oregon. C.S. Cooley was one of the only students enrolled under D.D. during his three months of teaching at the Palmer-Gregory School in Oklahoma. T.F. Ratledge, who also spent time with D.D. in Oklahoma went on to provide D.D. with his final teaching job at his Ratledge School in California. J.R. Drain attended D.D. Palmer’s final lecture tour through Davenport in 1913, just before he died. And then there was B.J. Palmer, who carried on his father’s paradigm well into the twentieth century, without whom the profession would not have fully emerged.

Unlike those other early pioneers who led schools and political organizations, Morikubo was unique.

While he was an early leader of the Universal Chiropractor’s Association and he did briefly advertise an Academy in Minnesota, he is best known as a political activist. 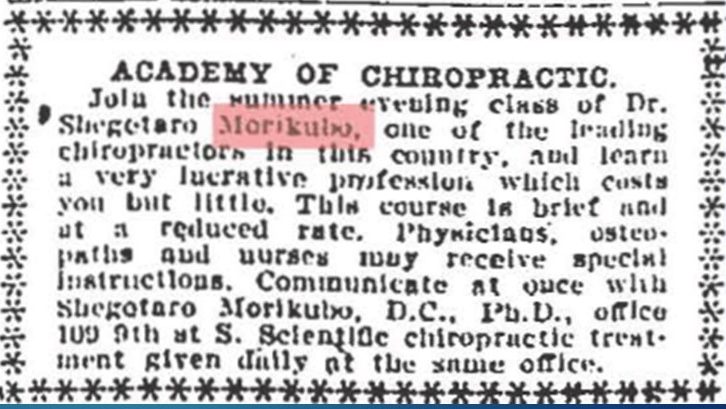 Soon after Morikubo received a life-changing chiropractic adjustment from D.D. Palmer, signed up as his student, and was presented with this text, D.D. Palmer was jailed for advertising to “cure” in The Chiropractor. The day after D.D. was sent to jail on March 29, 1906, Morikubo published a rebuke to the people of Iowa and America. He criticized a country that stood for ideals of liberty and freedom yet jailed an innocent healer for proclaiming his results.

One of D.D. Palmer’s friends, Samuel Weed, wrote to D.D. in jail,

“I saw later, Doctor, an article written by Shegetaro Morikubo, a student of Chiropractic under you from far off Japan. He was present at your trial and was surprised and disgusted that such injustice could be done under the stars and stripes.”

“His sensible words make me ashamed, while I honor him for his masterful rebuke of the wrong done to you; his words should make the people of Iowa so much ashamed that they would wipe out the evil law, or remedy the malicious interpretation of it that has imprisoned “for publicly professing to cure and heal without a license” one of her citizens who has discovered and teaches a science and art that leads the van of all that profess to cure and heal by adjusting the cause of disease, instead of curing and healing the disease themselves.” 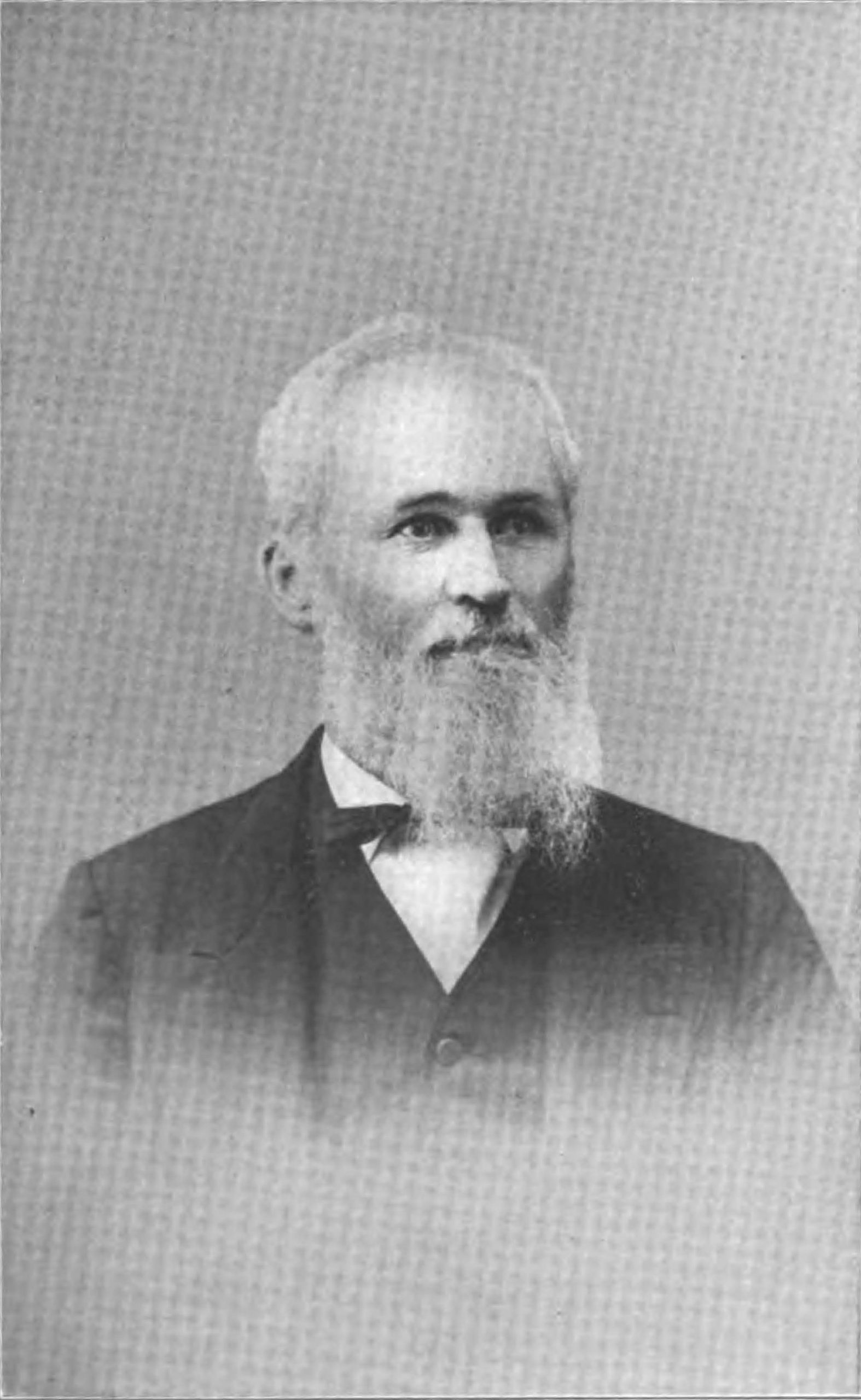 After leaving jail, D.D. Palmer moved to Oklahoma. Morikubo continued to study with B.J. Palmer until his graduation on December 22, 1906. Soon after graduation, he moved to LaCrosse, Wisconsin, which was the legal hot spot in the battle to legalize chiropractic. Morikubo moved there to force the issue.

Morikubo opened his office in the Macmillan building, which was where A.U. Jorris, DO, practiced. This was a direct challenge to the state board. Jorris was on the board and was renown in osteopathic circles for his successful legal case against two psuedo-chiropractors in 1905 and 1906.

Morikubo defied the board by growing his practice. In March or April of 1907, Morikubo writes, “If the Wisconsin board of Osteopaths claim that chiropractic is a part of Osteopathy they would commit robbery… If my statements, of equal rights, can be construed to “denied the state board” then defy the “state board,” I will until they “arrest him” and prove that I am practicing Osteopathy.”

By May, he had successfully cared for 70 patients. The case reports that he sent back to B.J. Palmer were characteristic of the range of disease processes typically seen by chiropractors. Chiropractic was born from medical failures.

He reported on one young lady with early stages of “consumption.” Symptoms were, “deep coughing, slight headaches and dizziness, sore throat, vomiting, specks in the eyes, hiccough and little temperature.” The analysis he describes is consistent with D.D. Palmer’s method of “nerve tracing.” Morikubo writes,

“I discovered subluxations at 2 and 4 dorsal, also 11 dorsal. From the 4th, on both sides, the tender nerves led almost perpendicularly toward the 6th cervical, from there it divided, one running to throat and lost in the flesh of the neck; the other turned downward and outward along the clavicle, from where it took straight course over 2-3 ribs then deflected toward outside 6-7 ribs, right into the diaphragm. The nerves on both sides were lost at the same point–diaphragm.” 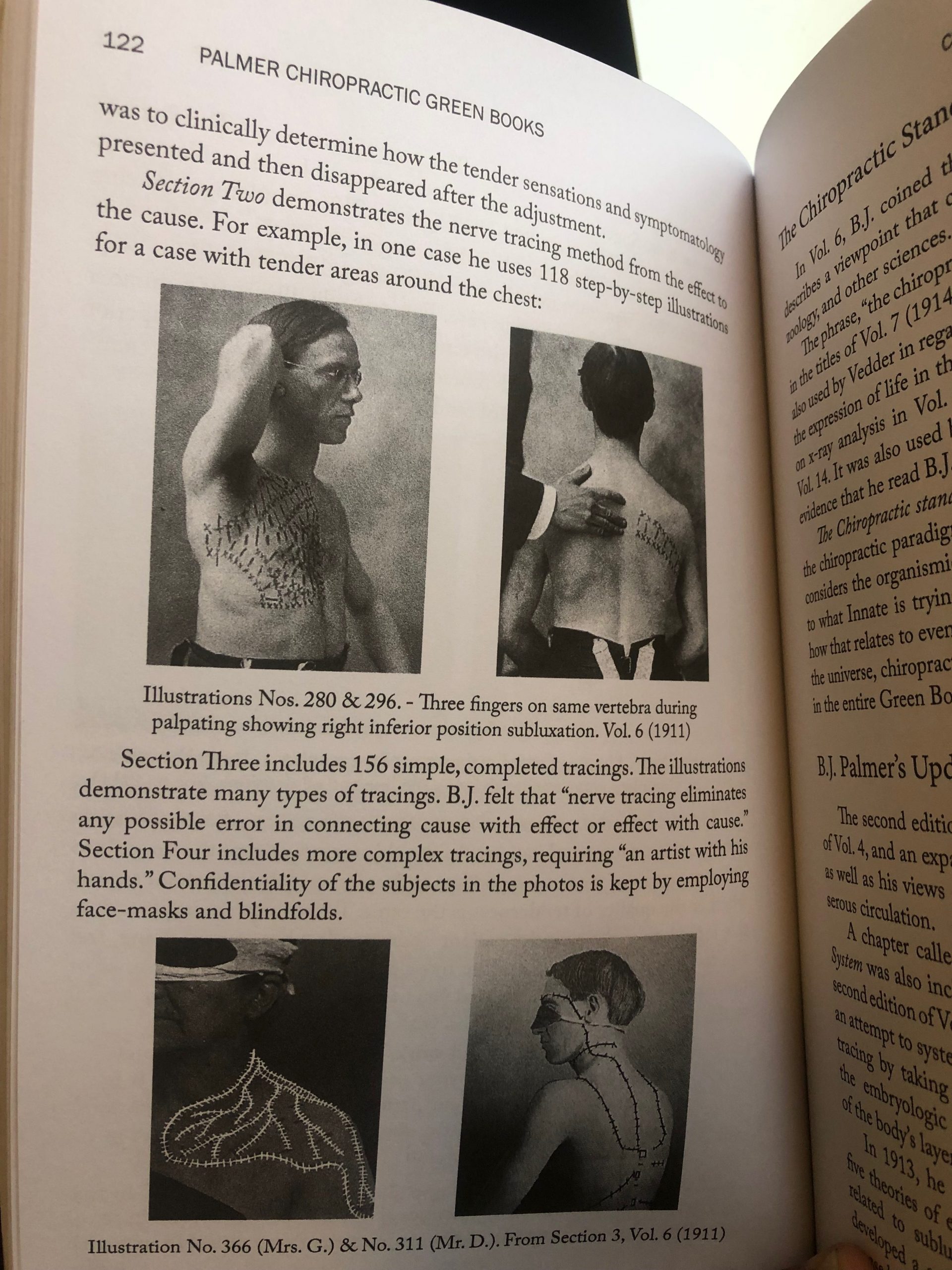 “I adjusted 2-4 dorsal, and the distressing symptoms ceased almost instantly. Since then, four days ago, she did not cough. She is practically well now. She took three adjustments.”

Cases ranged from 1 visit to four months. Some other cases he took note of included a 49-year-old male with pulmonary tuberculosis, a 50-year-old female with “suspicious sputum,” and a 20-year-old male with “rheumatism,” with a paralyzed left arm, left facial paralysis, and full body convulsions. Examination of that last case “found a big axis sub-luxation.” Morikubo writes, “The patient drew up as straight as a pine tree: whirled around the left arm like a windmill and walked out of my office, like a hurricane.” The patient returned the next day “angry” because his cure was too quick.

In July 1907, the board filed a complaint against Morikubo. The landmark trial took place in August. The case demonstrated that chiropractic was a distinct profession with a science, art, and philosophy. 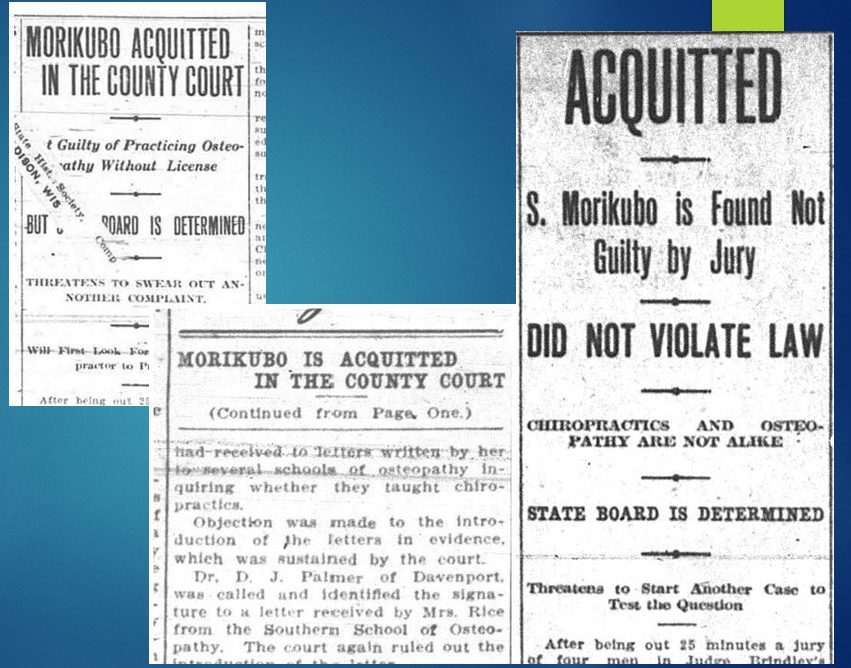 On January 1, 1908, Morikubo sent in several more cases to B.J. Palmer. He said the success of his cases was teaching him a great deal about the science of chiropractic. Also, that there were too many cases to include in one letter. And that he was growing so accustomed to successes that he was starting to take them for granted. He wanted to continue to document cases to push back against ignorance. Then he writes, “The future greatness of Chiropractic is simply immeasurable. In the meantime, I will live and die fighting against the medical trust and pseudo osteopaths.”

Morikubo’s story is just one example of the many pioneers that D.D. Palmer inspired with his magnetic personality, his mastery of chiropractic, and ability to teach others what he knew. The ripples of his gifts are still with us today and yet the significance of their contributions is fading from the collective memory of the profession. This is contributing to the many challenges the profession faces.