My search for papers and books using the term “Innate Intelligence” led me back to this gem from CMT – by Simpson and his student. I started a blog post about it a few years ago and promised to write more. It is still in the works.

In the meantime, I just noted their three uses of the term “Innate Intelligence.” Each one has its unique problems.


One cites Reed Phillips’s wrong approach that anyone who incorporates Innate Intelligence into the chiropractic paradigm is a “believer.” They rely on his argument as if it makes sense. Phillips’s article creates a straw man fallacy by suggesting that all chiropractors who focus on vertebral subluxation are “believers,” and those who are “mixers” must be true questioners. The whole premise is false.

Another use of the term cites Donahue’s 1986 paper. But their reference to Donahue’s interesting article is lacking. See for yourself. They write,

“For Palmer with his belief in vitalism and spiritualism, the only explanation for observations of the healing capacity of the body was a supernatural one, thus UI and II came into being. Unfortunately, DD Palmer’s conclusions about Innate Intelligence greatly overreached the scientific knowledge of the era [27]. To put this into perspective, Bernard’s concept of internal stabilisation of the body arose from the mid-1800s with the word homeostasis not arriving into the physiology lexicon until Cannon coined it in 1926 after which Cannon’s publication of The Wisdom of the Body in 1932 made ‘homeostasis’ a household word [34].”

Donahue wrote an entire paper that builds to this point, amongst others. He writes,

“By 1900, after a great deal of studying, he felt the conclusion he could reach about the marvelous complexity and healing capabilities of the body was that it was guided by a supernatural intelligence. 51 It was at this time that he said he was the first person to equate this intelligence with God. 52 This became the basis of his innate philosophy, but was a serious scientific flaw because his conclusion far outreached the available data. His conclusion, of course, was in line with his religious and vitalistic philosophical views. In his defense, his idea preceded by over a decade the now generally accepted principle of homeostasis elucidated by physiologist Walter Cannon (1871-1945).”

Now, “his conclusion far outreached the available data.” Does he mean his conclusion that the intelligence was equated with God? What data would support that exactly? Is that what they are referring to? This rhetorical strategy seems dubious at best. D.D. had not even written the word Innate yet by 1900 and did not bring God into the picture until 1905. I think all of these authors are just missing the mark, in big ways.

The paper uses the term a third time. They write,

Reference 47 is to Lerner’s Report. Lerner mentions Carver but never says he rejected D.D.’s concept of Innate Intelligence. Lerner does describe the discussion between Palmer and Carver about Suggestive Therapeutics. That is covered in The Definitive Guide. Check it out there.

Are there no peer-reviewers at this journal? More to come!

**Note – The Lerner Report should be read as a play not as facts. It is peppered with facts and insights but much of it is made up. 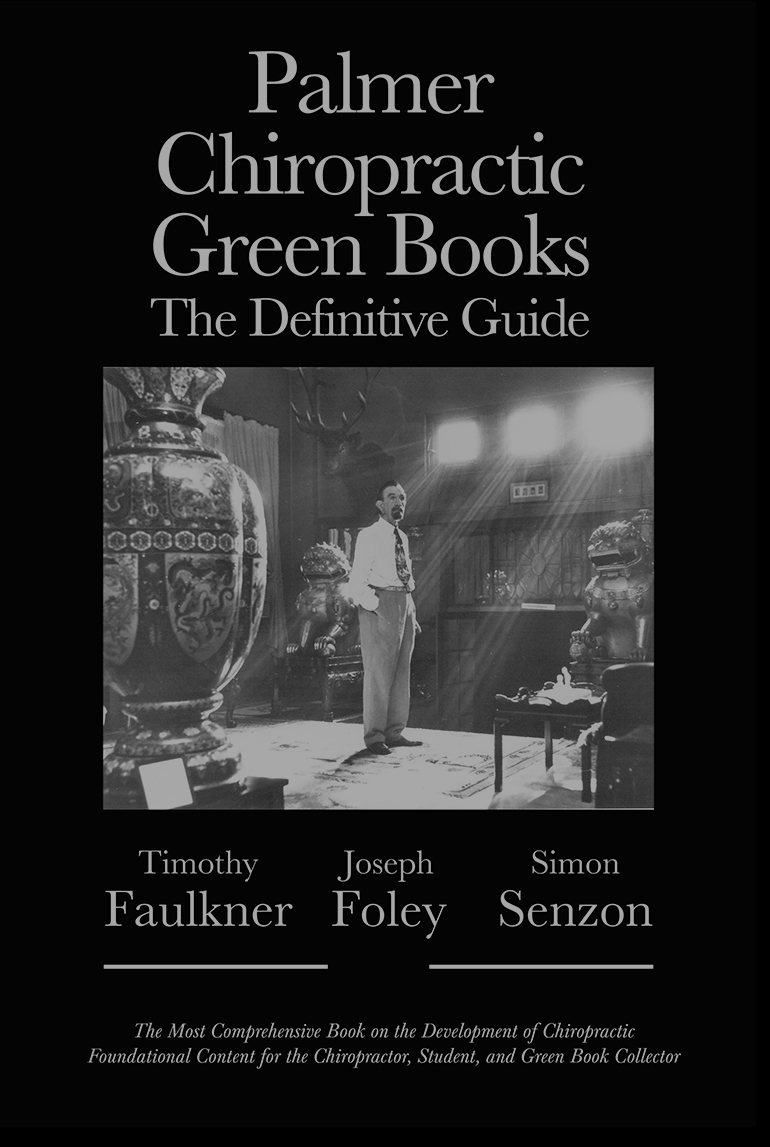 Palmer Chiropractic Green Books: The Definitive Guide is the first book to define the Green Books in detail. It includes a theoretical overview and a historical perspective. The Green Books were published between 1906 and 1966. The books are not only the philosophical, scientific, and artistic basis for the profession but also physical artifacts. The Definitive Guide provides a comprehensive list of every edition along with ways to assess rarity and value. The book is a new way to interpret these classic texts for expert and novice.