I am continually amazed by the bias exhibited by chiropractors against B.J. Palmer. It rarely seems to stem from a critical analysis of the literature. More often it seems like a meme that was passed down from teacher to student or from author to reader. This short clip is from a longer Skype lecture that I gave to a chiropractic school class. In the clip, I just mention this weird phenomenon.

At the end of the clip, I added one solution to remedying this problem. The solution is simple – read the new book Palmer Chiropractic Green Books: The Definitive Guide.

Just to be clear, I did not try to sell the book to chiropractic students. I am more interested in teaching facts to students. They always need more historical facts. I did plug it here because after cutting this clip from the larger lecture I realized the simple solution to this problem.

I know it may seem like I am putting B.J. Palmer up on a pedestal. After all, that is how the traditional bias is portrayed. Anyone who seems to embrace the ideas or theories espoused by B.J. are often criticized in some way. This is how bias generally works. Groups of people are clumped together as if they all believe the same thing without a critical or – dare I say – evidence based attempt at understanding.

B.J. Palmer was a controversial figure. He created enemies and followers. One example is from his classic talk, Cleaning the House. It was delivered on July 16, 1922, at Wilcox’s Pier Restaurant, Savin Rock, in West Haven, Connecticut. During the talk, B.J. laid out the new UCA policy to take over state boards throughout the United States and push for the model legislation. The UCA legislation was designed to ensure that chiropractic was solely defined as the analysis and correction of vertebral subluxation.

This approach went against those in the profession who sought to expand chiropractic beyond its traditional boundaries. Those once referred to as “mixers” because they mixed chiropractic with various therapeutic modalities and even included other professions in their practice of chiropractic. He also attacked several heads of chiropractic colleges. 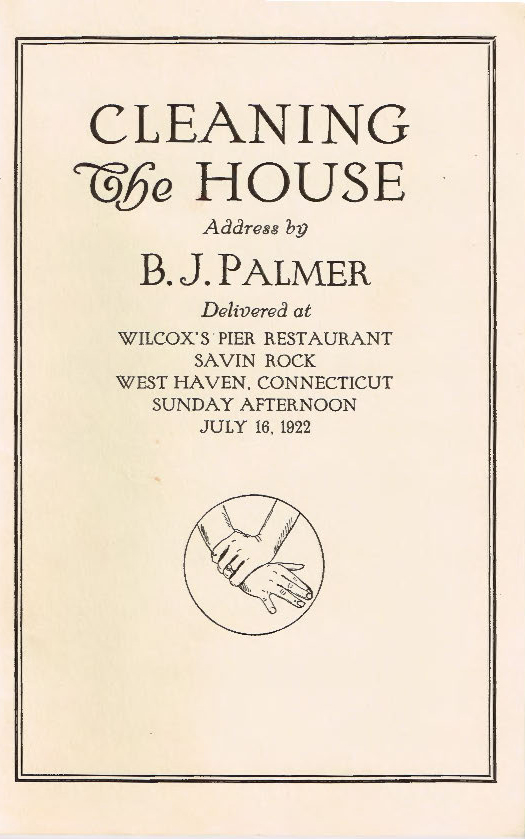 Think about how these attacks may have caused ripples throughout the decades. Students at these schools became the next wave of leaders in the profession. The students of their students are probably still in places of power throughout the profession, teaching, publishing, administrating, and establishing policies.

Basically, when I hear people shout negative things on social media about B.J. Palmer, I generally assume their teacher’s teacher’s teacher knew someone who had a disagreement with B.J. I rarely assume the person is well informed on the three types of chiropractic paradigms and the literature that supports them. Hopefully, they are.

Part one of the fifty-minute talk is available for TIC Members here: B.J. Palmer’s Evolution. In the talk, I explore the important facts that there are several different biases against B.J. Palmer. Some of these arise from D.D. Palmer’s writings (those need to be critically analyzed). Other biases involve misunderstandings about various aspects of B.J. Palmer’s theories such as the development of his upper cervical model of chiropractic.

There is also the decades of chiropractors that just accepted B.J. Palmer’s ideas. Some of whom studied his research and theories. Others may have just accepted the ideas on authority. This is not an excuse to lump all modern chiropractors into that category.

The Definitive Guide is a powerful way for the entire profession to learn the same basic content about the chiropractic paradigm, the Palmer Green Books, the evolution of the ideas, the decades of research, and interesting aspects of history. Many of the biases against B.J. Palmer will naturally dissipate as more and more chiropractors learn these facts.