The Institute Chiropractic (TIC) is the premier online continuing education portal for all things chiropractic. TIC was founded by Dr. Simon Senzon and launched in the spring of 2016.

The mission of TIC is to preserve, evolve, and teach the history of ideas in chiropractic through the complete online learning center. The discussion forum, reading room, archives, and dozens of audio and video resources enhance the online learning experience. TIC Membership includes Dr. Senzon’s most recent lectures, interviews with thought leaders, weekly updates, and several of his unpublished writings.

The Institute features online continuing education (CE) programs in 31 states and 6 provinces. Members of TIC receive significant discounts for the online CE courses. The site is designed to build on the success of Simon Senzon’s previous online learning website and his philosophy of chiropractic website.

Dr. Senzon is an academic pushing the boundaries of chiropractic knowledge. His research on the history of ideas in chiropractic has led to him lecturing around the world. He has also presented academic papers at the Association for the History of Chiropractic Conference, The Consciousness Conference, and the International Research and Philosophy Symposium.

Simon teaches three to four live events annually and delivers several Skype lectures to chiropractic groups and college classes on a regular basis. Every lecture is unique and is recorded for members of The Institute Chiropractic.

In addition to the 70 hours of content already available to TIC Members, a new series of online lectures is being developed by Dr. Senzon on the history of vertebral subluxation in chiropractic, Integral Ethics for chiropractors, a comprehensive history of philosophy in chiropractic, and methods for reviewing the literature.

Dr. Senzon has been on the editorial review board of The Journal of Alternative and Complementary Medicine, the research advisory committee of the International Chiropractic Pediatric Association, the advisory board of the Foundation for Vertebral Subluxation, and the editorial board of the journal Consciousness: Ideas and Research for the Twenty First Century.

Dr. Senzon maintains a private practice in Asheville, North Carolina, where he lives with his wife Susan (who is also a chiropractor) and their three children; Arielle, Noah, and Iya Rose.

Simon was first introduced to chiropractic as a young child covered with psoriasis. At age four, his parents drove him 45 minutes twice per week to Dr. John Pagano, D.C., a graduate of the Lincoln Chiropractic College.

In Pagano’s quest to help a patient with terrible psoriasis, he studied and followed the teachings of Edgar Cayce, who was known as the Sleeping Prophet. Before and after photos of Simon are in Pagano’s book Healing Psoriasis.


The power of the body to heal itself, the wonder of spiritual insight, and the chiropractic adjustment each became part of Simon’s core identity.

Simon received chiropractic care years later in high school, after a painful automobile collision, where his head cracked the windshield. He was told that his cervical curve would “never return”. The fine chiropractors that worked with him throughout high school and college were focused on the chiropractic adjustment of vertebral subluxation. As a result, his recovery and personal growth was life changing.

As an undergraduate at the Delta College Program at SUNY Brockport, Simon was trained as a historian. He also created several independent courses and completed his Bachelor’s degree in 3 years.

The highlights of his undergraduate studies included a series of capstone papers on; a rigorous exploration of the world’s spiritual traditions, an analysis of alternative religious traditions in American history, an in depth study of the writing of world history, and a preliminary examination of the evolution of evolutionary theories. The last paper included an analysis of vitalist approaches to evolution.

Upon graduating from college, Simon started receiving Network Care, which was an integration of several chiropractic techniques. He observed over a period of several years that his life and the lives of his family (who were all in care) were gradually transformed. Chiropractic took on a new level of depth for Simon. He continued in chiropractic care, worked for a chiropractor, and pursued a Master’s degree in philosophy at Goddard College.

Simon completed his Master’s thesis on the integration of the Body, Mind, and Spirit. The thesis combined Eastern meditative traditions, Western psychology, and philosophy. The emphasis was on the works of Plato, Aristotle, and Descartes. Also, the thesis built upon Simon’s prior writing on “The Universal and Particular” in Western philosophy.

He later applied his graduate research to understanding D.D. Palmer’s chiropractic paradigm, which centered on Universal and Innate Intelligence.

Upon graduating from Goddard, Simon started his pre-requisite classes for chiropractic college. As a way to integrate the hard sciences with philosophy, Simon studied complexity theory and Integral Theory. He continued this type of study throughout his education at Sherman.

On top of his personal chiropractic curriculum, Senzon studied the chiropractic Green Books alongside the works of Ken Wilber and also 20th century theoretical biology. He was fortunate to be hired by Dr. David Koch, then president of Sherman College, as his research assistant.

While a student at Sherman, Simon also taught introductory philosophy courses at Limestone College and the University of South Carolina at Union.

PUBLISHING ON HISTORY AND PHILOSOPHY

Upon graduation from Sherman in 1999, with the help of Ralph Boone, Simon published the ambitious paper, Causation and Health Related Quality of Life Expression based on the Vertebral Subluxation Model, the Philosophy of Chiropractic, and the New Biology.

Central to the paper was his analysis of the Green Books. The search concluded that the early chiropractic theorists used the term “organization” to refer to the body’s ability to self-organize and self-heal. This placed chiropractic organismic theory squarely within 20th century theoretical biology. Dr. Senzon developed the Health Continuum Model as a spectrum of healing from somatic health to psychological and spiritual well-being.

Simon soon published B.J. Palmer’s Model of Consciousness, What is Life?, and A History of the Mental Impulse.

Soon after opening his practice in Asheville, North Carolina, Dr. Senzon started teaching in the Humanities Department at UNC-Asheville. He initially taught Humanities 214 on the Medieval World and Humanities 414 on the Modern World. He eventually developed his own course called Integral Arts in the Arts and Ideas Program at UNCA.

In 2004, he and Susan had their first child, Arielle Rebecca. Arielle was born with profound special needs. Today, she is a thriving 13-year-old rock star!

In order to spend more time at home, Simon started working on his first book and teaching in the new online Master’s program developed by Ken Wilber and Sean Hargens at John F. Kennedy University (JFKU). The book built upon Simon’s early research on the chiropractic Green Books and his love for B.J. Palmer’s writings on spirituality and Innate Intelligence. Simon searched the Green Books for every spiritual quote in B.J.’s writings and shaped them into a text. To this day, The Spiritual Writings of B.J. Palmer is his most popular title.

Simon taught Subtle Energy Systems to the graduate students at JFKU from 2007 to 2012. His students had already completed a graduate certificate in Integral Theory and were the most well-trained Integral Theorists on the planet. He was able to assist them to build on their knowledge base and view the discipline of subtle energies from multiple perspectives utilizing the latest literature. He invited leading theorists such as William Tiller, Gary Schwartz, Rupert Sheldrake, and Donald Epstein to give distance lectures to the class.

During this period, Simon published several more books and papers all of which applied Integral Theory in new ways. For example, he helped to pioneer the fields of Integral Biography and an Integral approach to subtle energies. The books included The Secret History of Chiropractic, Chiropractic Foundations, and Success Health and Happiness. The peer-reviewed papers included Subtle Energies viewed through Four-Quadrants, B.J. Palmer: An Integral Biography, as well as Chiropractic and Energy Medicine: A Shared History.

Simon also lectured for the first 3 classes of Sherman’s Academy of Chiropractic Philosophers. He taught 10 hours of the 100-hour program. Topics included the history of philosophy, chiropractic and systems science, as well as chiropractic and energy medicine.

In 2009, Senzon collaborated with Drs. Epstein and Lemberger to further develop Epstein’s model of ROH. The first article laid the foundation for the ROH paradigm. A follow-up article discussed the ROH paradigm in the context of Integral Medicine. A third article explored the ROH paradigm further while also developing the theory of the 5 energetic intelligences, which relate directly to D.D. Palmer’s 3 levels of intelligence (Universal, Innate, and Educated).

Simon has published other articles and editorials integrating these ideas in the Journal Alternative and Complementary Medicine, including Seeds of Meaning, Transformation of Health Care and the Future, a new approach to health, wellness, and the crisis of health care in our time, and Five Keys to Real Transformation in Health Care.

A CHIROPRACTIC HISTORY OF IDEAS

This research led to the development of Dr. Senzon’s Gen/Wave model. The model situates the profession in terms of 4 intellectual generations and 8 waves of ideas. The ideas from these periods are then described based on how congruent they are to the chiropractic paradigm. Integral Theory is utilized as an overarching framework for the model.

In recent years, Simon has been working on a comprehensive history of subluxation theory in chiropractic. The early lectures and writings on this topic are available exclusively for Members of TIC. The research demonstrates that subluxation was the central defining element of the chiropractic profession for over 100 years.

Finally, starting in 2014, with the 10-year anniversary edition of The Spiritual Writings of B.J. Palmer, Simon started publishing The Chiropractic Classics book series. The books have become known in the profession as “the White Books,” because of their distinctive white covers. The Chiropractic Classics include books by chiropractic pioneers such as J.R. Drain, T.F. Ratledge, and Paul Smallie. The series expanded to include more recent authors such as Rolf Peters, Joaquin Valdivia Tor, Steve Walton, and Timothy Faulkner. Plans to publish several more books in the series are underway. 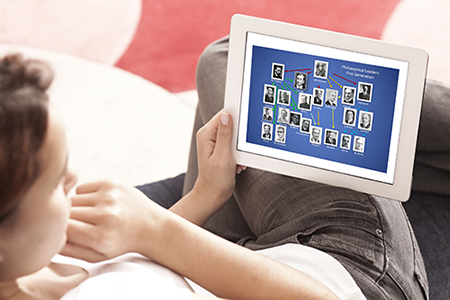