Chiropractic Courses soon to be submitted for Continuing Education Credits


These four talks were given in 2017. Each one covers a different lens through which to explore Stephenson and his classic Chiropractic Textbook. 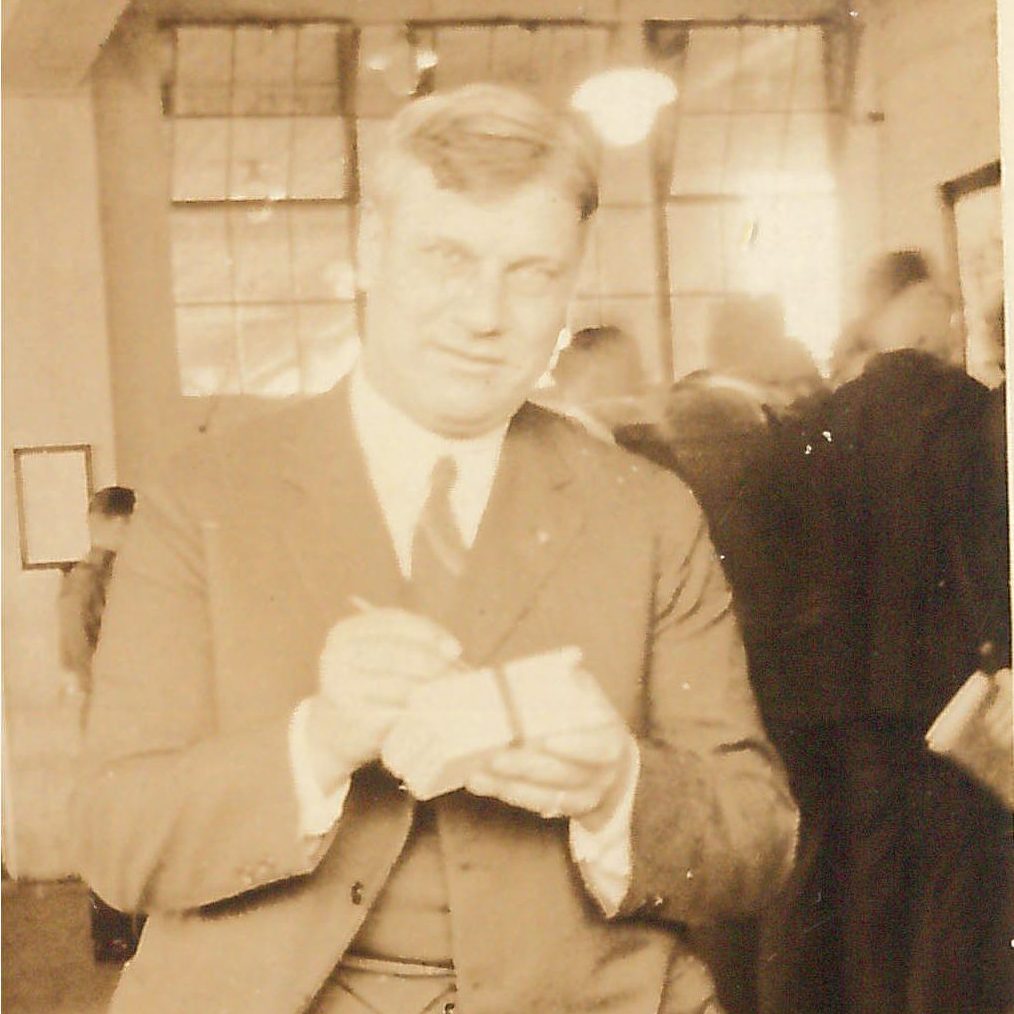 THE LIFE OF R.W. STEPHENSON

This talk was given on Sherman Connect Call on March 20, 2017. The call is posted live. TIC Members will be getting a new version with slides to enhance the learning experience. The talk itself covers the life of R.W. Stephenson, including glimpses into his biography that few of today’s chiropractors know about. This included a brief discussion of Stephenson’s articles in the 1920s on topics in philosophy and technique. The talk also covers what we know of Stephenson’s life after 1927 when his two books were published. This was the first talk on Stephenson in the series.

This 90-minute lecture focused on the evolution of function theory in chiropractic and how the theory was developed by Stephenson. The talk explores D.D. Palmer’s writings on the topic of physiological function. It then explores the innovations of B.J. Palmer over the course of his first five texts. The talk also describes the theoretical models developed by two other green book authors and Palmer faculty, Firth and Craven. Stephenson was taught by B.J. Palmer, Firth, and Craven. His approach to physiological function is discussed as an evolution of a theory that started with D.D. Palmer. *TIC MEMBER ACCESS

In this 1 hour and 15 minute talk, presented to a group of students at Palmer-Davenport, Stephenson’s text is viewed from an Integral perspective. The basics of the Integral Approach include “all quadrants” and “all levels” or the AQAL map. The quadrants consist of four primary domains or perspectives. The levels are best understood as increasing levels of complexity in each quadrant. Stephenson’s approach could be viewed through an AQAL lens. There are multiple ways that Stephenson’s perspective might be understood from this perspective such as his use of “clinic” rather than “lab” and his hierarchy of adaptability and sensibility. *TIC MEMBER ACCESS 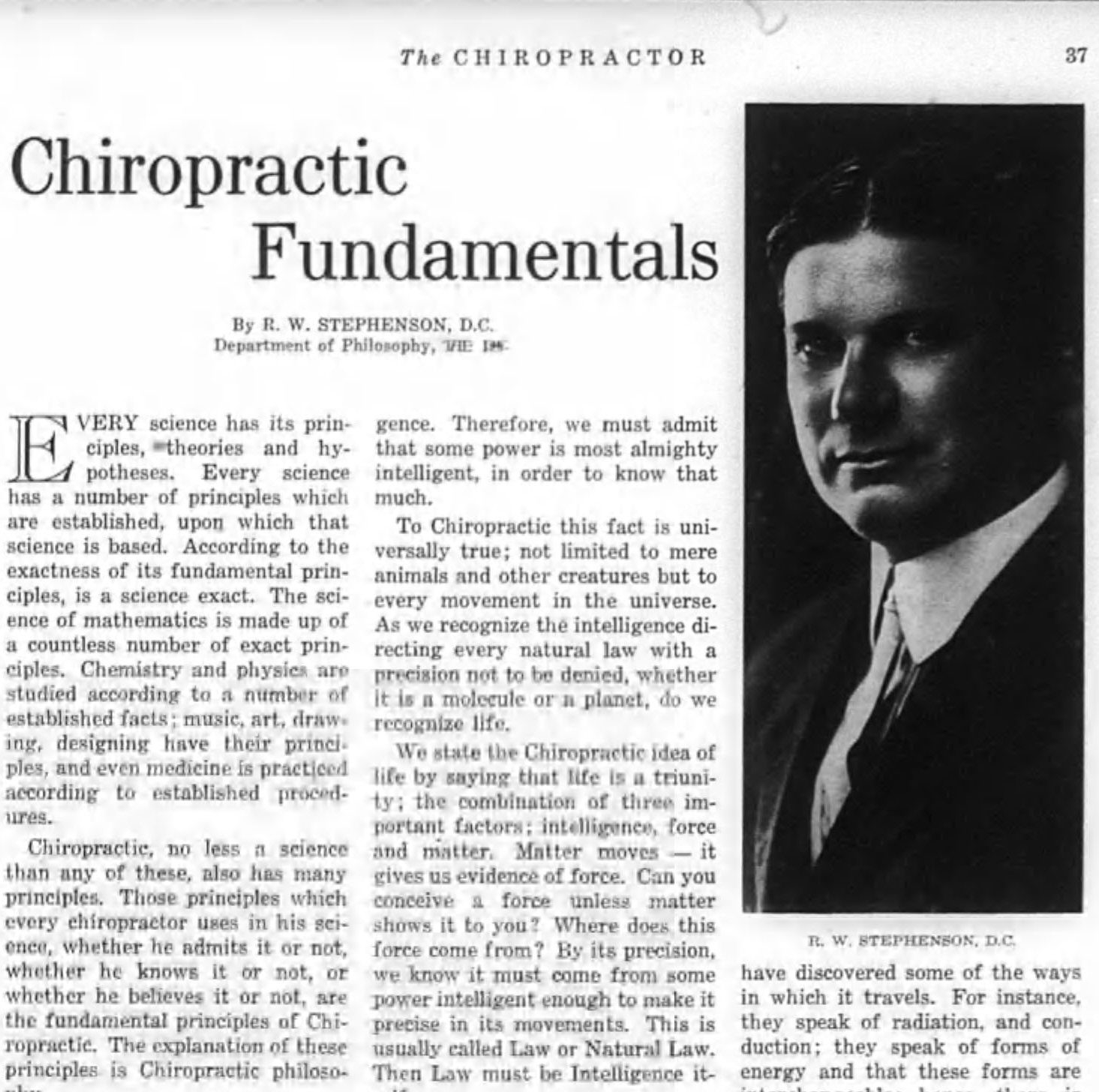 This 45-minute talk was presented to a class at NWCC. It explores Stephenson’s most important article. The article was written in 1924. It lays out his basic arguments that are developed later in his 1927 text. Each major idea of the article established a foundation for Stephenson’s text. The article covers principles, life as intelligent, the triune of intelligence, force, and matter, along with several other important concepts such as transmission and interference. *TIC MEMBER ACCESS

During this 45-minute all-school assembly at Life University in August 2017, Dr. Simon Senzon dissects many of the problems with the chiropractic literature. For more than forty years, chiropractic books and articles have repeated some incorrect facts and theories. Many of these mistakes relate to the history of ideas in chiropractic. Dr. Senzon treats these as “Fake News” because even though corrections have been in the literature for years, in some instances, the errors continue to get published. The fake news goes all the way back to the first years of the profession when D.D. Palmer’s students fabricated details about chiropractic’s origins. Dr. Senzon brings the latest facts about chiropractic history to the students in order to set the record straight. By understanding the history of ideas in chiropractic, students and practitioners could help move the profession forward. *TIC MEMBER’S ACCESS 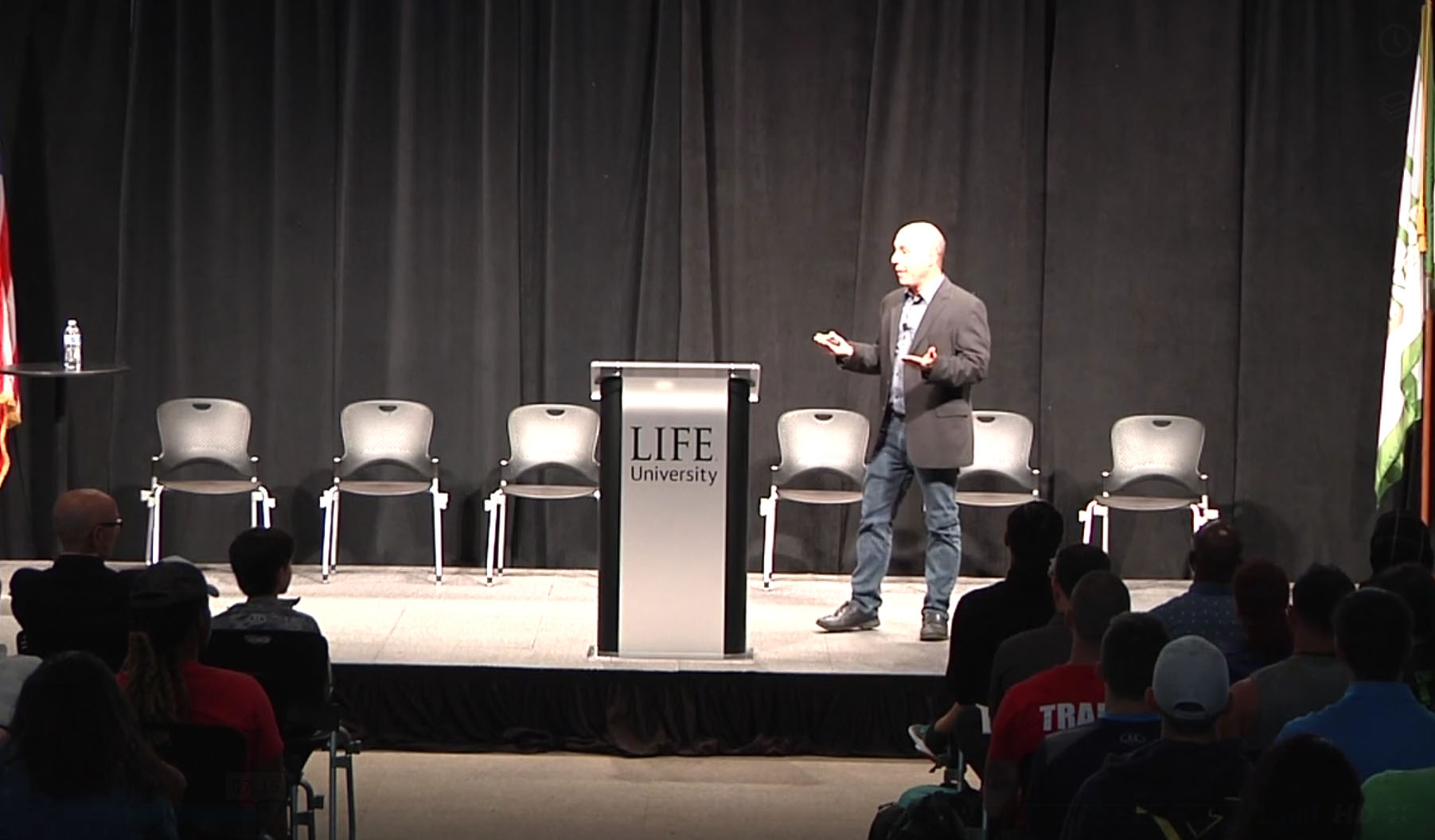 
A new model of Universal Intelligence is developed for the chiropractic profession. The emphasis is on a history of philosophy, an Integral perspective, and a biography of D.D. Palmer.

A CONTEXT FOR UI

This talk was presented to the Philosophy 2 class at Sherman College in February 2017. It explores D.D. Palmer’s early life as a Spiritualist and magnetic healer. Palmer developed his ideas for thirty years before he invented chiropractic. His theory of Universal Intelligence is described in terms of his first-person experience and his cultural influences. Palmer was self-taught as a anatomist and physiologist. He integrated everything he knew when he developed chiropractic and its philosophy. *TIC MEMBER’S ACCESS

UNIVERSAL AND INNATE IN HISTORY

This history of philosophy for chiropractors was produced for the first Zoe Symposium in Spring 2017. Based on Dr. Senzon’s lectures at the Academy for Chiropractic Philosophers and his series of articles on the topics of pre-modern and modern philosophy. The talk describes the structures of consciousness that human beings have developed through. The focus is on Western philosophy in relation to chiropractic’s central philosophical ideas. Dr. Senzon covers a basic overview of some pre-modern philosophers such as Socrates, Plato, Aristotle, Plotinus, Augustine, Boehme, and Bruno. The modern philosophers covered include Descartes, Spinoza, Leibniz, Berkeley, Hume, Rousseau, and Kant. An Integral Approach is emphasized as a way to best understand and develop these ideas. *TIC MEMBER’S ACCESS

This hour-long lecture was presented at Sherman College in 2016. The model of Speranskian Subluxation theory was coined by Dr. Simon Senzon in a recent paper. This talk describes (for the first time) a history of chiropractic ideas that used Speransky. Starting in 1938 and continuing well into the 1980s, Speransky’s decades of research and theory informed the chiropractic profession. Vertebral subluxation theory should not even be described without understanding the impact Speransky had on chiropractic. *TIC MEMBER’S ACCESS 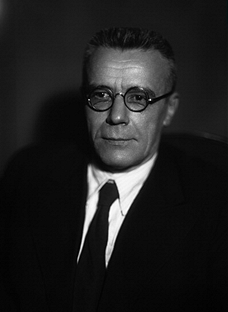 A Basis for the Theory of Medicine


This hour and a half lecture was delivered in two parts at the Massachusetts Alliance for Chiropractic Philosophy in 2017. The first part explained the early vibration theories of D.D. Palmer, B.J. Palmer, and John Howard. The second part described a history of B.J. Palmer’s later theory of periodicity and frequency of subluxation. 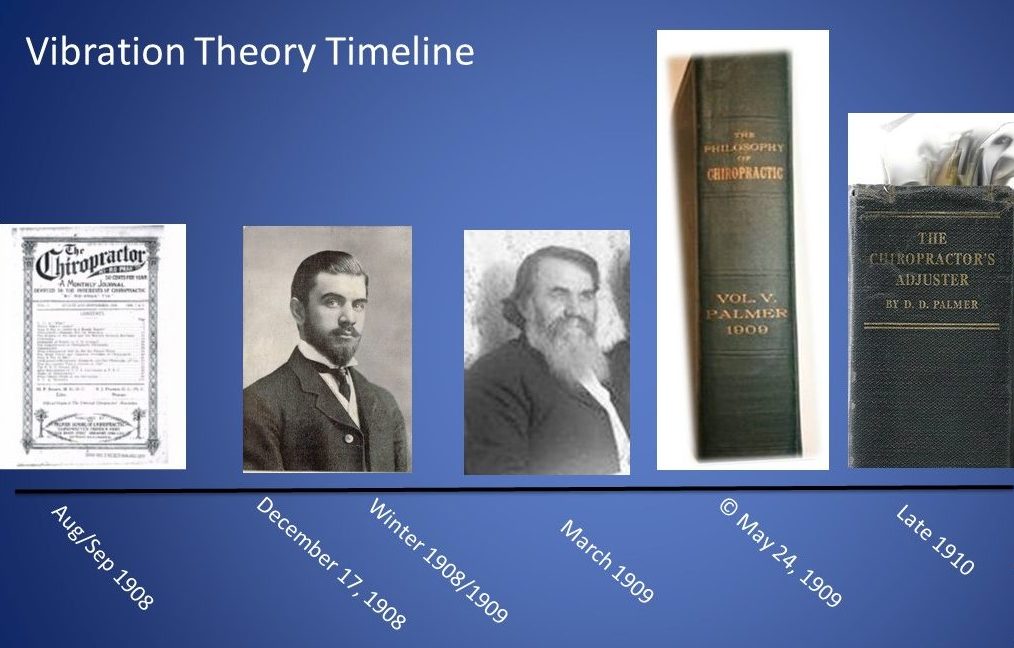 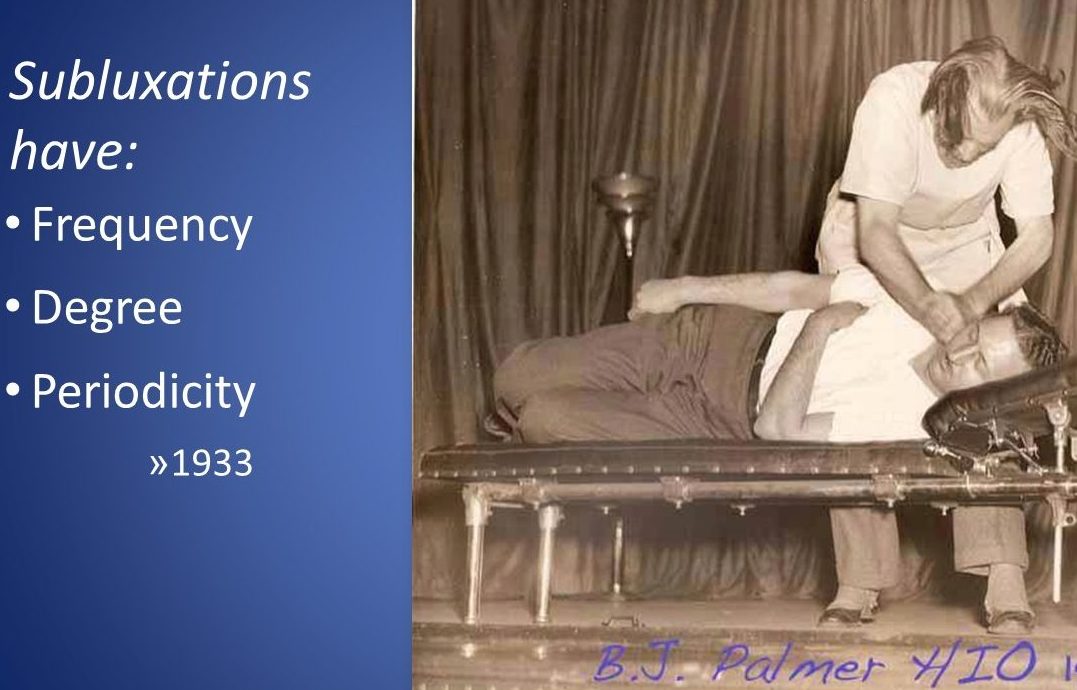 This talk explores two obscure writings on Subluxation Theory. In 1933 and 1934, B.J. Palmer introduced the idea that vertebral subluxations have frequency and periodicity. This is one his most obscure and fascinating subluxation theories. He based this model on clinical observations of dozens and perhaps hundreds of patients in the clinic using thermographic instrumentation and x-ray analysis. B.J. Palmer delivered three talks on the subject. Each were published eventually. He concluded that the vertebral subluxation existed in an abnormal “field” or range. Subluxations were periodic and related to chronically weakened muscles. This theory was a break from prior models of subluxation. *TIC MEMBER’S ACCESS

This 80-minute lecture was presented to the Chiropractic Philosophy Forum in 2014. It is the first lecture on the Gen/Wave model, which model a useful way to understand the history of ideas in chiropractic. The four generations are measured by 33 year periods starting in 1913, when D.D. Palmer died. At that point, a full generation of chiropractors were poised to lead the profession. The 9 waves of chiropractic ideas are defined by the literature, citation patterns, and significant developments in the history of ideas in chiropractic. *TIC MEMBER’S ACCESS

Since 2000, Dr. Simon Senzon has presented papers at various conferences. Many of these talks were recorded and some of them are posted for TIC MEMBERS. 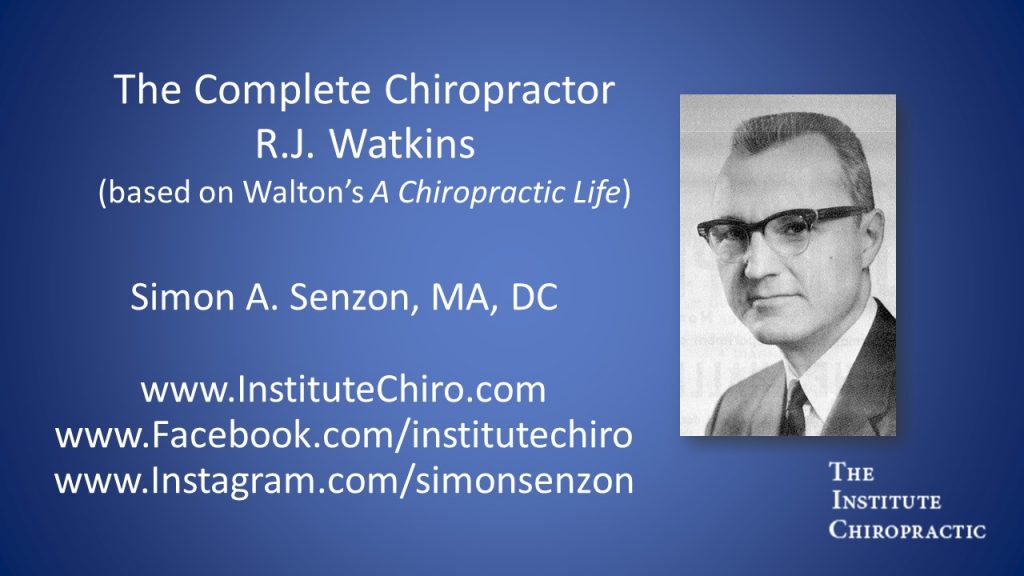 The 2-hour talk was presented at Sherman’s Lyceum in 2017. The talk covers the life and writings of RJ Watkins and was based in part on a biography included in Stevan Walton’s new book on Watkins. The impact that RJ Watkins had on the chiropractic profession is significant. Few modern day chiropractors have studied his many writings on technique, neurology, immunization, philosophy, and subluxation theory. This introduction to RJ Watkins is a powerful way to learn about one of the intellectual leaders of the chiropractic profession in the 20th century. *TIC MEMBER’S ACCESS 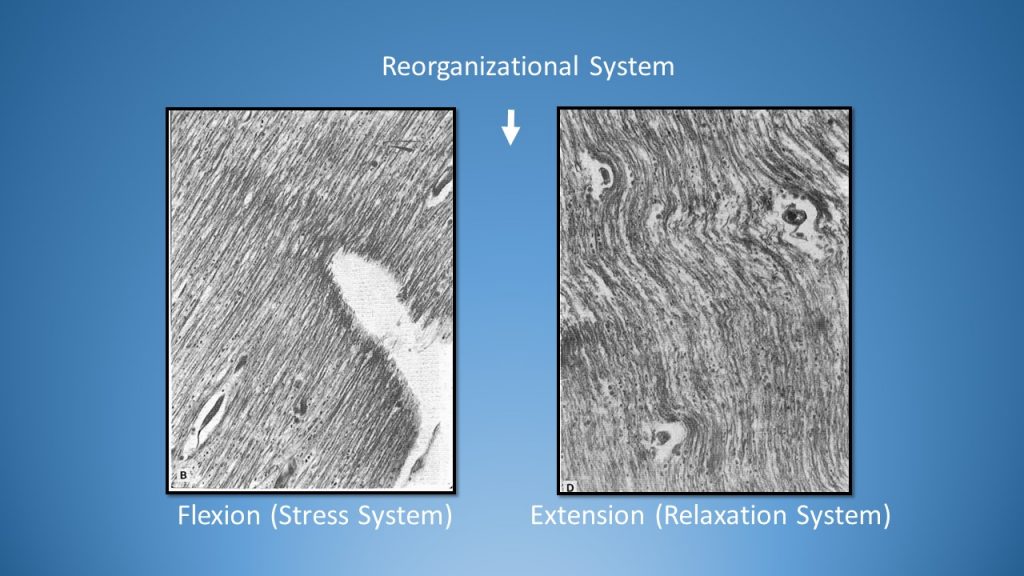 The Network Wave as a CPG

This presentation at IRAPS in 2014 was based on a recent paper on the topic. Ten years of research into the spinal wave associated with Network Spinal Analysis demonstrates that the wave is a central pattern generator. The paradigm that NSA developed from included B.J. Palmer’s cord pressure model, Korr’s facilitation model, and Breig’s paradigm of Adverse Mechanical Cord Tension. The talk and paper were co-authored with Dan Lemberger and Donald Epstein. *TIC MEMBER’S ACCESS

This talk was presented at the Association for the History of Chiropractic in 2014 with Dr. Brian T. Lumb. A history of chiropractic instrumentation is developed with an emphasis on the unique contribution of engineer Dale Lumb, PhD (father of Brian). Lumb’s two inventions included the Versubtec and the Electrical Conductance Scanner. The talk also covers the ways in which chiropractic instrumentation was suppressed by the AMA and the FDA in the 1960s and 1970s. *TIC MEMBER’S ACCESS 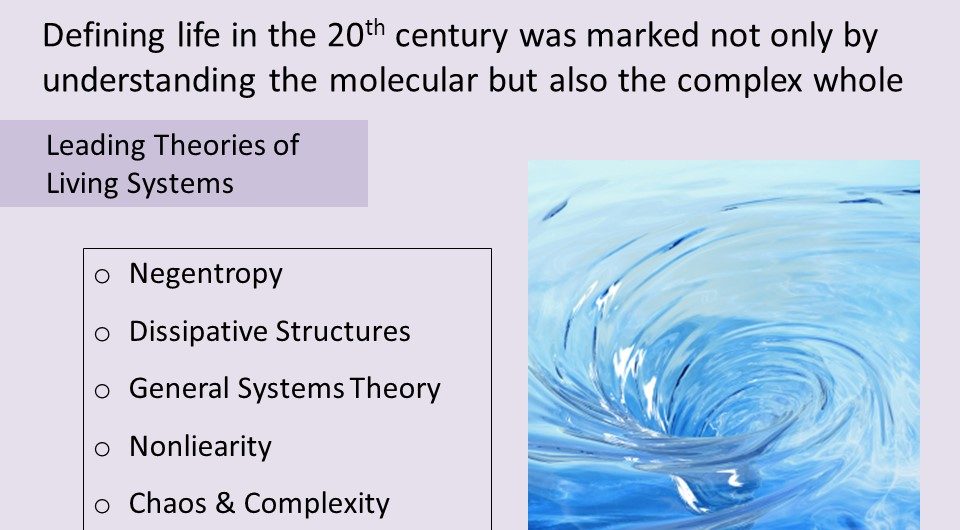 Levels of Thinking and Living Systems


This talk was presented in 2001 to a student conference on the philosophy of chiropractic. The talk explores structures of consciousness and a history of biology in the 20th century. Chiropractic theory and dynamical systems approaches to living systems both developed during the same time period. *TIC MEMBER’S ACCESS